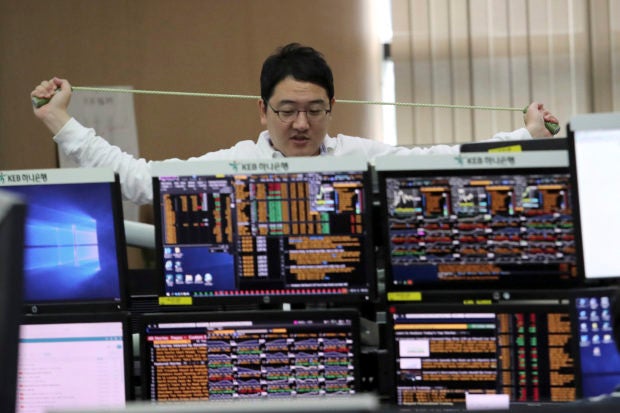 The congressional inquiry into Trump is throwing more volatility into a market that already was nervous over U.S.-Chinese trade tension.

“The impeachment of Trump will now become a drawn-out saga that feels like annoying supermarket music,” Jeffrey Halley of Oanda said in a report.

Also Thursday, the Commerce Department reported the U.S. economy grew at a modest 2% in the second quarter, sharply lower than the past year’s 3%-plus growth rates.

The Shanghai Composite Index advanced 0.2% to 2,933.47 on the last day of trading before Chinese markets close for a weeklong holiday.

Traders were encouraged by a Chinese Commerce Ministry announcement that importers had agreed to buy U.S. soybeans as the two sides make conciliatory gestures ahead of trade talks. That followed an earlier decision to list punitive tariffs on soybeans, the biggest Chinese import from the United States.

Plans to go ahead with negotiations next month have helped to ease market jitters but there has been no sign of progress toward resolving the bruising tariff war over trade and technology.

While many analysts say the Trump probe isn’t likely to affect the market significantly, it does add a degree of uncertainty and could complicate the White House’s efforts to resolve trade disputes with China and other nations.

ENERGY: Benchmark U.S. crude lost 29 cents to $56.12 per barrel in electronic trading on the New York Mercantile Exchange. The contract gave up 8 cents to $56.41 on Thursday. Brent crude, used to price international oils, fell 56 cents to $61.18 per barrel in London. It retreated 31 cents the previous session to $61.74.