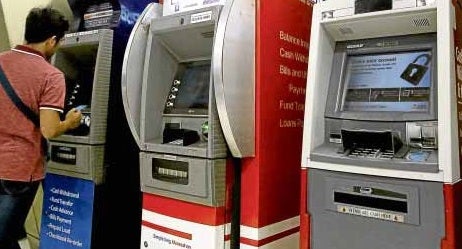 NO HIKE A man withdraws cash at a mall in Manila. —RICHARD A. REYES

MANILA, Philippines — The Bangko Sentral ng Pilipinas (BSP) has already rejected applications by several banks to hike charges for automated teller machine (ATM) transactions by up to 100 percent, an official of the state regulator told the Senate on Monday.

“We have been processing and evaluating requests for increase in ATM fees. We have already returned many of these because the price increases were not within reason,” Villa said in response to Poe’s query.

“They have to justify the reasonability (of the rate adjustment)… The increases won’t be automatic. There are processes that they would have to go through. There’s an evaluation process,” he continued.

De Villa clarified that the proposed increase in ATM fees only covered interbank transactions, or cash withdrawals from machines owned and operated by banks other than the “mother bank” of the depositors.

He said certain banks wanted to raise up to P20 from the current charges of P10 to P15 per interbank withdrawal.

“We have not approved anything that’s P20. So the reasonable (increase) that we may consider is somewhere from P1 to P3,” De Villa said.

He declined to name the banks which sought to raise ATM charges and those whose applications the BSP has already denied.

“I think that it is in the interest also of the Bangko Sentral to be very, very prudent in approving the fees because we have oversight (power),” said Poe, chairperson of the Senate committee on banks, financial institutions and currencies.

“If we receive complaints that the increase goes beyond a certain amount and it is unreasonable, we can summon them again and ask why they allowed it,” she also said.

“So I think the Bangko Sentral will be very careful in issuing approvals because they will be answerable for it.”

Poe had filed Senate Resolution No. 96 directing the chamber to look into the planned additional fees for ATM withdrawals.

She said requiring ATM users to pay higher rates would be “financially disadvantageous to our country’s more than 58 million ATM cardholders.”