BANGKOK – Stocks got a downbeat start to the week as investors kept a wary eye on tensions with Iran and on signals from China and the U.S. on prospects for a resolution of their tariffs war. 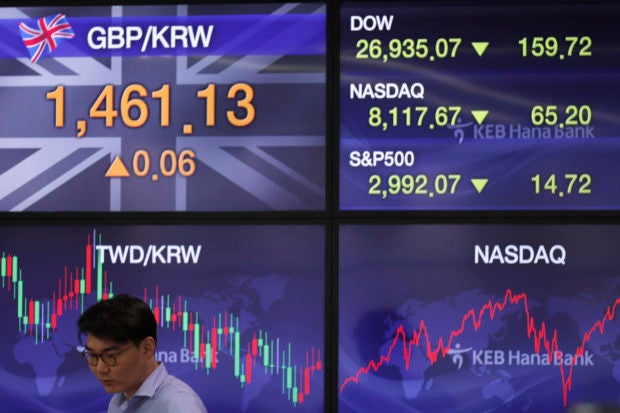 A currency trader stands near screens showing the foreign exchange rates, left, at the foreign exchange dealing room in Seoul, South Korea, Monday, Sept. 23, 2019. Stocks got a downbeat start to the week as investors kept a wary eye on tensions with Iran and on signals from China and the U.S. on prospects for a resolution of their tariffs war. (AP Photo/Lee Jin-man)

Fosun International Ltd., the biggest shareholder in Thomas Cook, fell 1% in Hong Kong after the British tour company Cook collapsed following a failure to rescue it. As a result, bookings for more than 600,000 global vacationers were canceled early Monday.

Britain’s Civil Aviation Authority said 178-year-old Thomas Cook’s four airlines would be grounded and its 21,000 employees in 16 countries, including 9,000 in the UK, will lose their jobs.

India’s Sensex continued a rally that began Friday with an announcement of fresh tax incentives for businesses. It climbed 2.5% to 38,967.32. Tokyo’s markets were closed for a holiday.

Wall Street ended last week with losses, snapping a 3-week winning streak for the S&P 500 after reports emerged that Chinese officials canceled a planned trip to farms in Montana and Nebraska.

That sparked concern that trade talks due to resume next month might be in trouble after U.S. and Chinese envoys met last week for preliminary discussions to lay the groundwork for later, more formal negotiations.

President Donald Trump’s remarks to reporters Friday that he wants a complete deal with China and won’t accept one that only addresses some differences between the two nations added to the unease.

However, officials said the talks would go ahead next month, somewhat alleviating that concern.

Oil prices rose after Trump, arriving in New York for the meeting of the United Nations General Assembly, said he intended to seek support for a coalition to confront Iran after the U.S. blamed it for last week’s strike on a Saudi Arabian oil facility.

Iran’s president on Sunday urged Western powers to leave the security of the Persian Gulf to regional nations led by Tehran. He criticized a new U.S.-led coalition patrolling the region’s waterways as nationwide parades showcased the Islamic Republic’s military arsenal.

The U.S. alleges Iran carried out the Sept. 14 attack on Saudi Aramco’s largest oil processor, which caused oil prices to spike by the biggest percentage since the 1991 Gulf War. While Yemen’s Iranian-allied Houthi rebels claimed the assault, Saudi Arabia says it was “unquestionably sponsored by Iran.”

For its part, Iran denies being responsible and has warned any retaliatory attack targeting it will result in an “all-out war.”

With all that percolating, U.S. crude oil added 61 cents to $58.70 a barrel in electronic trading on the New York Mercantile Exchange. On Friday, it lost 10 cents to $58.09 a barrel.

Brent crude, the international standard, picked up 65 cents to $63.85 per barrel.

Read Next
SEC orders shutdown of 11 illegal lending apps
EDITORS' PICK
Is it safe to talk politics again at family gatherings? ‘The Reconciliation Dinner’ shows us what that’s like
The Best Tech Gifts For The 2022 Holidays
House energy committee chair Arroyo bats for cheap electricity
EDITORIAL: To a bike-friendly future
Pagasa: Warm, sunny Sunday in most parts of PH
vivo’s coming to town to grant wishes with more holiday promos
MOST READ
LOOK: Vhong Navarro transferred to BJMP detention facility in Taguig
The Elephant Man in the Senate
Posh village as ‘shabu’ haven
LOOK: Zanjoe Marudo bonds with Ria Atayde, her family
Don't miss out on the latest news and information.