Did you know that the term “mall” originally referred to open-air public spaces?

If you lived in the 17th century and were looking for a mall, people would direct you to an alley that hosted a game similar to croquet. Later on, the mall was used to refer to landscaped promenades populated with trees and flowers. It was only in the 20th century when the mall became an enclosed, gigantic complex where people would go to shop or hang out.

Today, malls are going back to their outdoor origins.

Inspired by the green movement, many shopping malls now incorporate landscaping and other natural features. These elements make retail structures more visually pleasing, thus encouraging more visitors. Beyond landscaping, however, many mall operators and retailers have introduced new features in their building designs to stand out from the rest.

Here are some malls from around the world that have redefined the shopping experience.

How a mall became a park

Parque Toreo of Nacaulpan, Mexico, exemplifies well the fusion of an outdoor atmosphere with an indoor retail space. Built in 2014, the complex is actually a combination of a shopping mall and an office building. The whole project has a total area of 51,753 sqm.

The shopping area occupies the first four floors of the complex. Shops, restaurants and even a cinema are accentuated by lush vegetation, fountains and open areas, akin to an outdoor park. What makes the mall unique is how it looks like an outdoor environment at first glance.

The common corridor is naturally lit by a glass dome that acts like a huge skylight. The flooring of the mall mimics stone, which functions as a hardscape contrasting the indoor plants. Even the structural members of the space seem to be inspired by nature. The columns resemble tree trunks holding up thin beams which gracefully curve underneath the skylight. 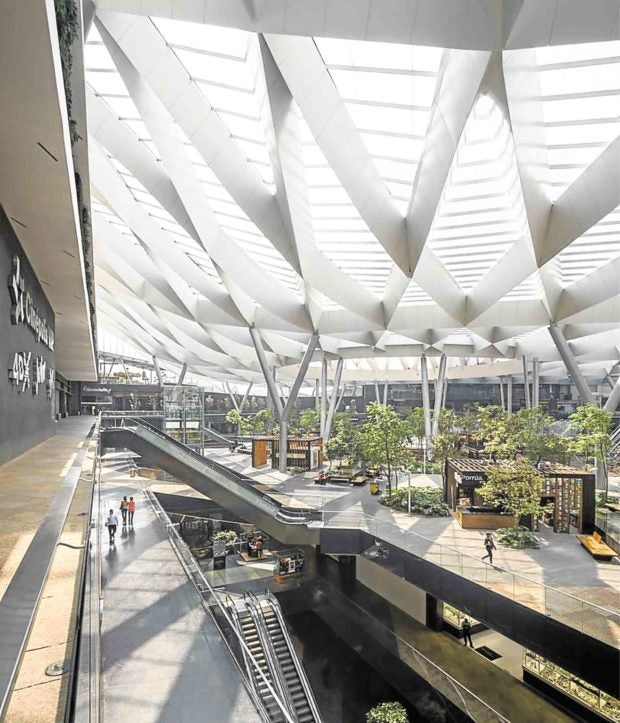 Parque Toreo of Mexico exemplifies a shopping mall that also functions as a park.

The presence of escalators and shop signs are the only ones that reveal the true character of the building. Despite its commercial purpose, Parque Toreo successfully accomplishes the role of an outdoor park. People flock to it to relax, socialize, and enjoy the sights. It transcends its original intent to sell products to become a vital, iconic part of the city.

How a mall became a toyland

Standing against a backdrop of stark residential buildings, the retail area is made up of small, colorful structures that seem to have been designed by a doodling child. Connecting seven residential neighborhoods, the shopping center is actually more of a commercial street. It features outdoor corridors which connect the sprawling retail shops. Visitors can thus enjoy the natural environment especially since the area is located next to a tranquil river.

Each retail shop is housed in a structure with a height that ranges from one to three floors. All the stores are uniquely designed and oriented, offering various experiences to visiting patrons. Though the buildings may appear to have been haphazardly arranged on the property, each structure has direct access to the outdoor corridors and enjoys foot traffic.

The retail center was designed by the Shanghai ZF Architectural Design Firm. The concept for the sprawling commercial center is a “market” which features spaces designed for the human scale. Grand structures are intentionally avoided to create an area that is both intimate and inviting to the neighboring communities.

The world has yet to see the success of this shopping area in the years to come, but it’s a place that is worth visiting if you want a child-like environment in the midst of a suburban district.

The mall that references history

If you visit the City of Leeds in the United Kingdom, you’ll most likely encounter the eye-catching structures of the Victoria Gate complex.

Built in 2016, the buildings pay homage to the rich history of the English city. While the complex features interesting designs, it merely expounds on the character of the existing Victoria Quarter, Leeds’ shopping district.

Victoria Gate features three distinct structures, all admirable in their own right. The most prominent building contains the John Lewis shop, the anchor store of the whole complex. It features a diagrid façade that are made of white, diagonal concrete members with glass inserts. It alludes to the traditional shopping arcades of the city, such as the Grand Arcade and Casa Colombiana, with its high-ceiling corridors washed in light.

The second building continues the diagrid pattern of the main structure and serves as a multi-storey parking building. It features twisted aluminum cladding that continues to allude to the main structure. The façade provides visual privacy yet permits daylight and natural ventilation into the parking area.

The third building continues the historical allusions of the complex, with its pleated, terracotta and rust-colored façade. It pays homage to the traditional Burmantofts pottery that the city is known for. Unlike the two previous structures, however, it has an industrial feel to it with its metallic cladding. The building permits natural light and ventilation through its folds, still continuing the traditional arcade theme.

Elements that make a mall successful

The above-mentioned complexes are only some of the shopping centers that have successfully redefined malls. They contain the five ingredients of successful mall design, as outlined by John Caulfield of the Building Design and Construction Magazine. 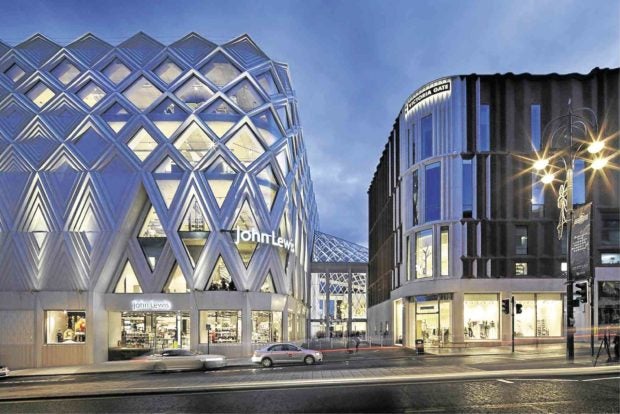 The structures that compose Victoria Gate allude to historical references in their architectural design.

To sum up, these are the elements which make retail buildings successful: designs with a “Wow!” factor; expansion of common spaces; provision of “live/ work” spaces; inclusion of activity centers; and introduction of technology in the design. Many buildings nowadays feature these elements, but only a few remember to actually meet the needs of the communities where they are present.

Overall, the shopping mall continues to evolve as a concept. For it to survive the threat of online shopping, it must be able to integrate the growing needs of patrons without sacrificing identity. After all, malls in today’s culture are no longer built for retail purposes alone. They also serve as cultural landmarks and vital parts of the communities where they belong.