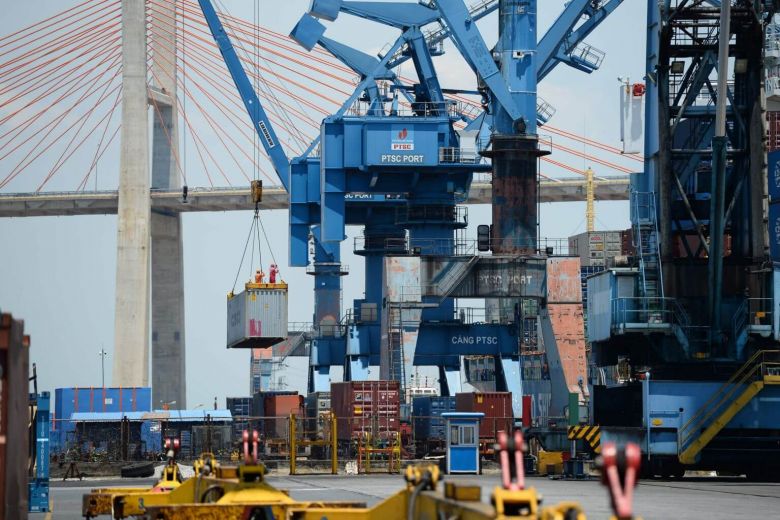 Containers are transferred from a truck to a cargo ship at the international cargo terminal of a port of Hai Phong city, on Aug 12, 2019. Vietnam and the Philippines were the only two countries not to post lower growth in 2018. PHOTO: AFP

SINGAPORE — Southeast Asia is more vulnerable to an economic downturn than it was during the global financial crisis one decade ago, according to analysts at global management consultancy Bain & Co.

Greater exposure to a slowing China – and other structural economic shifts – have left most Asean markets in a more perilous position than before, according to a report released on Friday.

Half of the region’s economies have fallen into a current account deficit as exports tumbled, while Vietnam and the Philippines were the only two countries not to post lower growth in 2018.

The commodities sector will not be as able to cushion the economic blow, as prices and sales are both down, while corporate and household debt have blown past 2008 and 2009 levels to reach the private-sector leverage of more developed markets such as the United States.

“The region’s strong economic growth does not, in fact, shelter it from harm should other parts of the world sink into a downturn or even a recession,” said the report.

“Many of the structural traits that cushioned the region a decade ago, such as China’s strong growth and the global demand for commodities, now offer less of a buffer. The shape of a downturn throughout the region could vary depending on the severity and causes of a global recession in those countries that buy large amounts of the region’s palm oil, coal, computers and other goods.”

Bain partner Thomas Olsen, who co-authored the report, told The Business Times over the phone that the next downturn will likely be broad-based and not limited to an acute financial crash, as it is set to be “a more typical economic correction at the end of a cycle”.

Regional exposure to the Chinese economy has been reflected in a five percentage point increase in China’s share of Asean exports between 2006 and 2018, the report noted. The share of exports even doubled for both Malaysia, where it grew from 7 percent to 14 percent, and in Vietnam, from 8 percent to 16 percent.

Yet, China’s gross domestic product growth has eased from 12.7 percent to just 6.6 percent, over that same period – a slowdown to which South-east Asia has gained a front-row seat.

“An ongoing US-China trade war might further slow China’s growth, which would pose a problem for the region in the short term,” the report also warned.

But Mr Olsen added that the push for closer economic ties within the region could support South-east Asia more than in the past. “Integration should be net helpful, because to the extent that there is a larger internal Asean economy, that would shelter… from external shocks,” he said.

This is even as Southeast Asia could still snag longer-term benefits from the trade war, such as a faster move in manufacturing to Vietnam, or higher Chinese demand for Thai food products.

The report also cautioned that the timing of the next downturn “is, of course, unknowable” – an uncertainty that Mr Olsen characterised as the biggest challenge for policymakers and firms alike, as excessively conservative preparation could also curtail growth opportunities.

Bain prepared the report for the Singapore Summit 2019, which is an annual forum organised by Temasek Foundation, the philanthropic arm of Singapore state investment firm Temasek Holdings.

The event, which takes place on Friday and Saturday, is also supported by Temasek, Singapore sovereign wealth fund GIC, the Monetary Authority of Singapore, and the Economic Development Board.