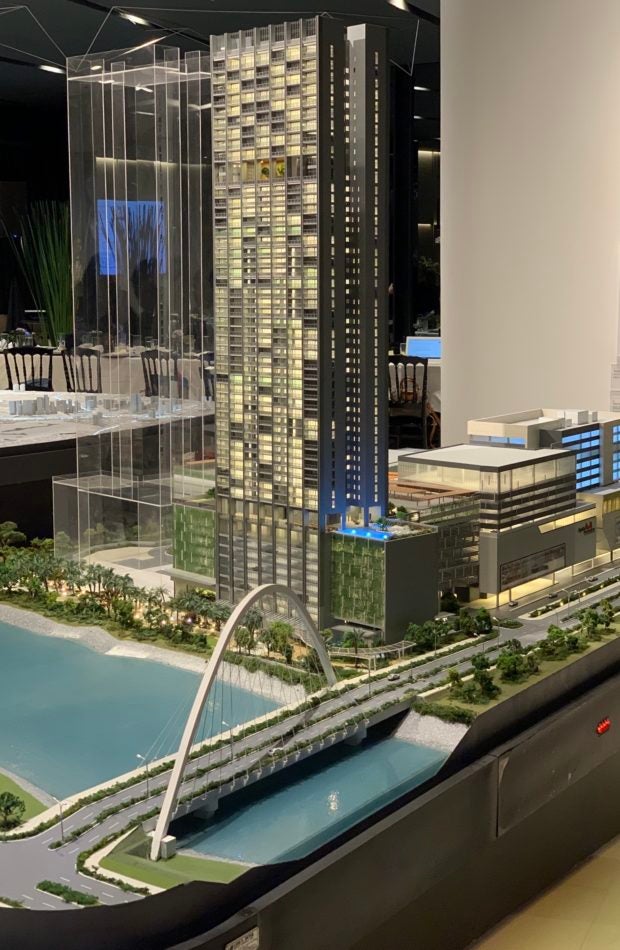 Scale model of ALP’s Parklinks North Tower, seen as the most expensive residential condo project in QC to date

Ayala Land Premier’s (ALP) twin-tower Parklinks North and Parklinks South towers will rise on the 35-hectare estate spanning Quezon City and Pasig—which will be linked by a bridge over the Marikina River—that is jointly being developed by ALI and tycoon Lucio Tan-led Eton Properties.

The first tower, 55-story Parklinks North, was launched with 280 units with a total inventory of about P12.7 billion, of which 70 percent was now taken up. Ranging from 70 to 306 square meters, the units are priced from as low as P22 million to as high as P120 million, inclusive of value-added tax and parking space.

Paolo Viray, ALP head of sales and marketing, said about 90 percent of Parklinks North’s buyers were local residents of Quezon City while some were from Makati and Pasig. “A lot of them are entrepreneurs and repeat buyers,” he said in a press briefing on Tuesday.

ALP expects to spend around P7 billion to develop Parklinks North Tower, which offers one- to four-bedroom configurations.

Apart from its standard units, Parklinks North offers a limited selection of special residences. Each of the four-bedroom Sky Villa, with only nine available units, offers a rare residence on the highest floors with an expanded living and dining experience as well as a master suite almost as large as a one-bedroom unit.

The three-bedroom Horizon Villa, with only two units of this type, is an expansive bi-level unit with a sizeable veranda located on the 45th and 46th floors.