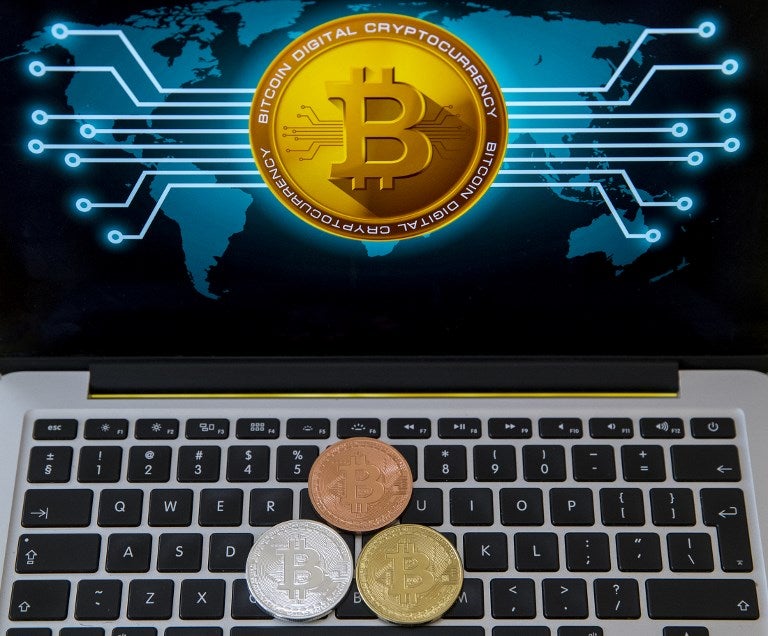 Virtual representation of a digital cryptocurrency such as Bitcoin. (AFP FILE PHOTO)

MANILA, Philipppines — Local authorities — acting on a tip from the Chinese government — have uncovered what could be a growing online investment scam hiding behind a fledgling industry based in one of the country’s special economic zones.

This was after government agents last week arrested 277 Chinese nationals during a raid in Pasig City on suspicion of using cryptocurrency operations to dupe unsuspecting would-be investors back in China.

According to a source familiar with the Sept. 11 raid, the operation, which was led by Bureau of Immigration agents, was conducted on Grapefruit Services Inc. on the 37th floor of One Corporate Center in Ortigas Center, Pasig City.

Grapefruit is an authorized service provider of Golden Millennial Quickpay Inc. Ltd., an offshore cryptocurrency company licensed by the Cagayan Economic Zone Authority (Ceza), according to the source.

The source added that Grapefruit is registered as a Ceza locator but is operating in Metro Manila, outside the ecozone’s jurisdiction. This has been a trend in such operations in recent months.

Ceza officials were contacted for comment but had yet to respond as of press time on Sunday.

Corporate documents obtained by the Inquirer show that Grapefruit has an authorized capital of P1 million. The company occupies three stories of the Ortigas office building and has 277 employees — all of whom had Ceza visas, which means that they are restricted to work within the special economic zone in Cagayan province.

Its registration documents from the Securities and Exchange Commission (SEC) expressly prohibit Grapefruit from undertaking activities as a securities broker or dealer, or as an investment adviser or investment company. Grapefruit is also barred from operating on fiat money or virtual currency exchange.

Because of these developments, immigration authorities have begun to keep a closer watch on similar operations, where Chinese workers are employed to provide service support to offshore companies dealing with cryptocurrency and other financial products.

Since unveiling last year its new thrust to be the base of cryptocurrency operations in the country, Ceza has granted licenses to more than 20 offshore firms engaged in so-called financial technology solutions and offshore virtual currency exchange. These companies hire local service providers, all of which are also registered with Ceza.

Last week’s raid in Pasig was carried out by agents of the Bureau of Immigration’s fugitive search unit, the Presidential Anti-Corruption Commission, and the Philippine National Police’s Integrity Monitoring and Enforcement Group, who were accompanied by representatives of the Chinese Ministry of Public Security.

Immigration Commissioner Jaime Morente said the raid was prompted by a tip from the Chinese Embassy on the investment scam, which has defrauded more than a thousand Chinese nationals.

Initially, the immigration chief ordered the arrest of only four Chinese nationals but authorities caught 273 other suspects “in the act of conducting illegal online operations.”

Morente said the Chinese government canceled the passports of the arrested employees, making them illegal workers in the Philippines. The detained workers will be deported.

Ceza launched its bid to become the country’s cryptocurrency hub to recover the revenue stream it had lost when predecessors of what are now called Philippine offshore gaming operators (Pogos) were legalized following their accreditation by the Philippine Amusement and Gaming Corp. in 2016.

Last year, Ceza Administrator and CEO Raul Lambino said the agency earned more than P200 million from licensing fees of offshore financial technology firms in the first half of 2018.

Ceza stood to earn at least P3.9 billion from an initial batch of 25 licensees, Lambino said. He also cited investment commitments of $1 million each, adding that fintech operations in Ceza would also create at least 20,000 jobs.

Lambino said Ceza would authorize principal licensees to operate in offices in Metro Manila but would have to course all trading transactions through LR Data, a cyberpark in Santa Ana, Cagayan.