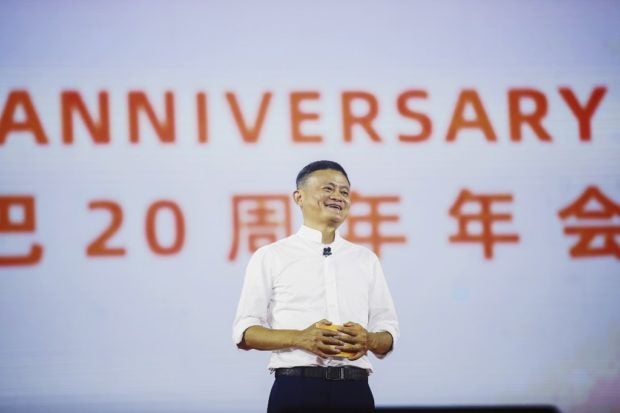 Jack Ma, chairman of Alibaba group, speaks during an event to mark the 20th anniversary of Alibaba in Hangzhou in China’s eastern Zhejiang province. AFP

HANGZHOU, China — Alibaba Group’s founder Jack Ma said on Tuesday his decision to resign as chairman is “10 years in the making” and marks the success of the company’s succession plan.

On Sept 10, 2018, Ma proposed to leave his post as chairman a year later, taking many by surprise. Alibaba said Ma will remain on the board of directors until 2020 and in the Alibaba Partnership, a group of longtime senior managers who exercise significant control over the business and its affiliates.

Ma said his decision didn’t come as a whim or from pressure but was a result of 10 years’ serious preparation. He thanked the company for taking the time to “find, nurture and support” the new leadership team.

In an emotional speech delivered during the gala, Ma said hoped that 30 years later, the company will have at least 1,000 employees per year with 10 years’ work experience at Alibaba to join other companies, as a way to contribute to society.

He identified sustainability, inclusiveness and altruism as the main themes for tomorrow, and said that he believes “technology is meaningless should it fail to attend to these trends”.

“If the past 20 years were for internet companies, the future 30 years will be when internet technologies are used well,” he said.

He also emphasized that Alibaba has never envisioned becoming a “big” or “strong” company, nor to defeat opponents. Instead, its aim has been to become a good company that can only be defined by responsibility and kindness.

Ma’s successor, Daniel Zhang, who has been CEO since 2015, said Alibaba is looking to build up sales to $1.4 trillion in the next five years as part of efforts to bolster the company’s long-term goal.

“It is imperative that we stick to our three strategies, namely globalization, (expansion of) domestic needs, as well as big data and cloud computing,” he told the audience.

Ma reiterated his long-held wishes to devote more time to education, philanthropy and environmental protection after fostering the once nascent startup into the commerce emporium it is today.

“It’s simply too early for me to retire at such a young age,” he said. “I just want to have a change of gear. See you soon.”