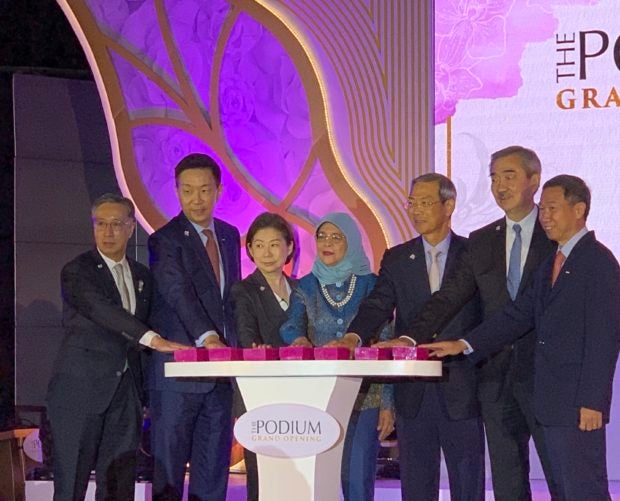 As the Philippines and Singapore marked the 50th anniversary of their diplomatic relations, two of their largest business groups showcased the completion of their iconic retail and office venture at the Ortigas central business district, The Podium.

No less than Singapore President Halimah Yacob graced the grand opening of the new Podium mall and the 48-story Podium West Tower, a 60-40 percent joint venture between the SM group’s BDO Unibank and Keppel Land.

Three years ago, BDO Unibank unveiled Phase 1 of this complex, the Podium East Tower, which houses some of the operations of the bank.

“These three buildings completed the project of the joint venture of Keppel and SM/BDO which started in the 1980s. In the last three years, we have seen more the optimism of Keppel group in the growth prospect of the Philippines resulting in rushing the completion of this project today,” BDO chair Teresita Sy-Coson said during the inauguration.

“This development is significant because it is here where we hope to connect more Singapore and Philippine companies,” she said.

More than ever, Sy-Coson cited the renewed interest of various Singapore companies in the Philippines, adding that with the Podium, the venture sought to “create a piece of Singapore.”

The new Podium features a vertical garden in its exterior and an array of fashion, food and beverage, wellness and entertainment options. It has five levels of retail floors with a total leasable area of 50,000 square meters. On its rooftop is a state-of-the-art event place with over 750 sqm of space plus three Director’s Club cinemas.

Tan Swee Yiow, CEO of Keppel Land Ltd., told reporters that this property project was Keppel group’s biggest investment so far in the Philippines. “Hopefully, we can do more,” he said.