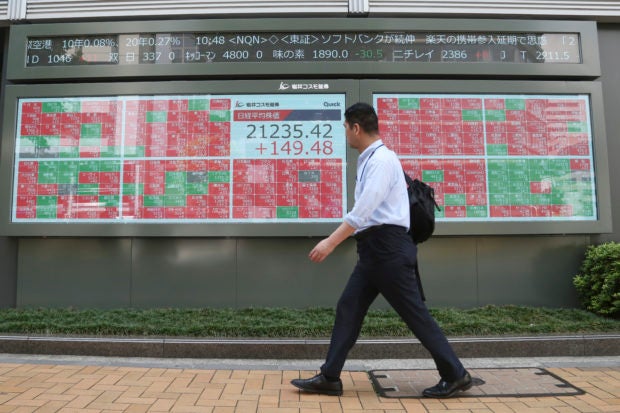 A man walks by an electronic stock board of a securities firm in Tokyo, Friday, Sept. 6, 2019. Asian shares rose Friday as investors cheered plans for more trade negotiations between Washington and Beijing and drew encouragement from positive data about the U.S. economy. (AP Photo/Koji Sasahara)

“Indeed it is a positive sign that meetings will take place at multiple levels,” said Zhu Huani of the Asia & Oceania Treasury Department of Mizuho Bank, referring to the talks between the U.S. and China.

“As limited progress is expected, there will still be many twists and turns along the way and hurdle for more good news is substantially higher. Therefore, we think the rally could be short-lived without more breakthroughs.”

Markets have been rattled this summer as the longstanding trade war between the U.S. and China escalated. Past rounds of negotiations have failed to yield progress. Even so, news Thursday that envoys from Washington and Beijing plan to hold talks next month elicited fresh optimism on Wall Street that the world’s largest economies may yet find a way to resolve their costly trade war.

Investors have been worried that uncertainty over the conflict and the fallout from tariffs goods imposed by both sides will exacerbate a slowdown in global economic growth and hurt corporate profits.

Negotiations between the world’s largest economies have been tenuous and the trade war has been escalating with expanded tariffs on each other’s products.

The latest escalation kicked in Sunday, with the U.S. imposing 15% tariffs on $112 billion of Chinese imports. Washington is planning to hit another $160 billion on Dec. 15, a move that would extend penalties to almost everything the United States buys from China. Beijing responded by imposing duties of 10% and 5% on a range of American imports.

The private report frequently diverges from the government’s own employment report, which is scheduled to be released Friday. Economists expect that report will show 160,000 jobs were added.