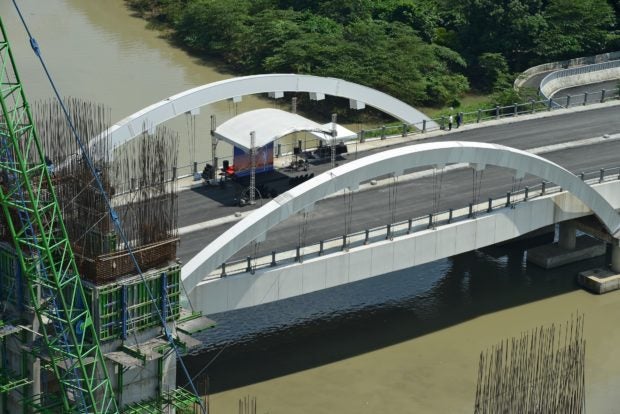 The new bridge linking Quezon City and Pasig at Bridgetowne

A 200-meter bridge linking Quezon City and Pasig over the Marikina River opened to the public yesterday, boosting business prospects for the mixed-use estate called “Bridgetowne” spanning the two cities that is being developed by Gokongwei-led Robinsons Land Corp. (RLC).

RLC, which spent “hundreds of millions” in pesos to build the bridge, also improved the connectivity between the eastern and western portions of Bridgetowne.

“The public can benefit from the additional infrastructure which can help alleviate traffic especially for those coming from the east [side of Metro Manila],” RLC president Frederick Go said in a briefing yesterday.

The bridge—which has separate bike and pedestrian lanes—was master-planned by AECOM, while Mañosa & Co. was responsible for the bridge architecture.

At the Quezon City side, Bridgetowne has 8.05 hectares mostly consisting of business process outsourcing (BPO) office towers and will soon have a world-class shopping center and a five-star hotel. To date, this part of Bridgetowne is already a thriving business center.

At the Pasig side of Bridgetowne, which spans 22.56 ha, the township will have a wide range of residential condominium towers alongside other developments. It will be a “self-contained community,” Go said.

The first residential tower brought to the property market is Cirrus, a 40-story condominium complex offering mostly 25-square meter studio units priced at a little over P3 million each.  This residential project was built with the BPO workers working at the other side of Bridgetowne in mind, Go said.

Over 80 percent of about 1,500 residential units at Cirrus offered for preselling had been sold within a month after the launch, Go said.

The next residential project in Bridgetowne is an upscale residential tower under a joint venture deal with Hong Kong Land. This will be a “first-class” residential condominium that will cater to a higher-end market, Go said.

With 1.5 ha of land earmarked for this venture, there will be space for up to three buildings under the joint venture with Hong Kong Land. The first tower will bring to the market around 500 residential units in one-, two- and three-bedroom configurations.

The young mayors of the two cities, Vico Sotto of Pasig and Joy Belmonte of Quezon City, graced the opening of the new bridge yesterday. —DORIS DUMLAO-ABADILLA