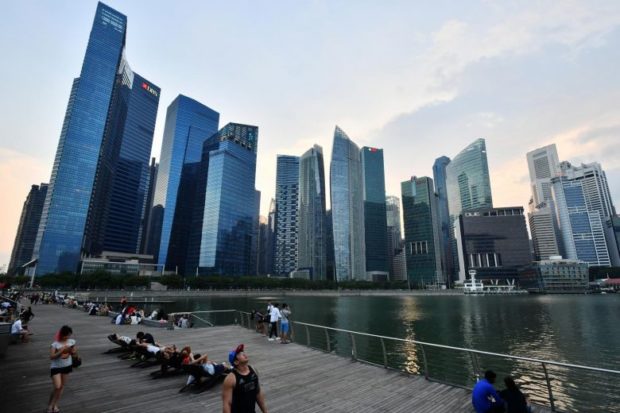 For the third quarter, the economists expect year-on-year growth of 0.3 per cent. PHOTO: ST FILE

SINGAPORE – Private sector economists have sharply lowered their forecast for growth in the Singapore economy this year to 0.6 per cent, from the 2.1 percent expansion they saw in June, according to the latest quarterly survey of professional forecasters by the Monetary Authority of Singapore released on Wednesday (Sept 4).

Their lower forecast is in line with official estimates. Last month, Singapore slashed its 2019 forecast to between 0 and 1 percent from 1.5 to 2.5 percent previously, tipping growth to come in “around the mid-point” of the forecast range. This came as growth in the second quarter slowed to 0.1 percent from 1.1 percent in the first three months of the year.

For the third quarter, the economists polled by MAS expect year-on-year growth of 0.3 percent.

Compared to their June predictions, their forecasts fell for most sectors, including manufacturing, construction, wholesale and retail trade, accommodation and food services and non-oil domestic exports.

They are most pessimistic about non-oil domestic exports, expecting shipments to contract by 9.2 percent, much worse than their June prediction of a 2.1 percent decline.

They also expect manufacturing to shrink by 2.4 per cent, down from the estimated 0.2 percent dip in June.

The economists also maintained a gloomier outlook for retail and wholesale trade, downgrading their growth figures to 2.8 percent decline, down from the predicted 0.3 percent drop in June.

However, they expect the finance and insurance sector, and private consumption to grow.

The economists cited their top concern as the further escalation of trade tensions, in particular between the US and China.

A further economic slowdown in China, brought about by external uncertainty and domestic financial market instability, also continued to be a concern for half of the survey respondents.

Geopolitical risks in places such as Hong Kong and the Persian Gulf were also widely cited as a downside risk.

On the upside, economists said the easing of trade tensions could contribute to a stronger-than-expected growth in Singapore. However, they also believe that such easing is becoming less likely.

Other potential areas of hope are fiscal stimulus, both in Singapore and elsewhere, and easing global financial conditions led by more accommodative monetary policy in developed markets.

Besides GDP growth, economists also downgraded their expectations for overall inflation and core inflation. Respondents expect overall inflation to come in at 0.7 percent, down from an earlier prediction of 0.9 percent in June.

They expect core inflation to come in at 1.2 percent, down from 1.4 percent in June.

They also foresee the Singapore currency weakening against the US currency, from $1.368 per dollar to $1.388.

The three-month Singapore Interbank Offer Rate (Sibor) – the benchmark for the pricing of most home loans – is expected to drop to 1.65 percent from 2 percent in the June survey.

A total of 23 private sector economists and analysts responded to the survey conducted last month.