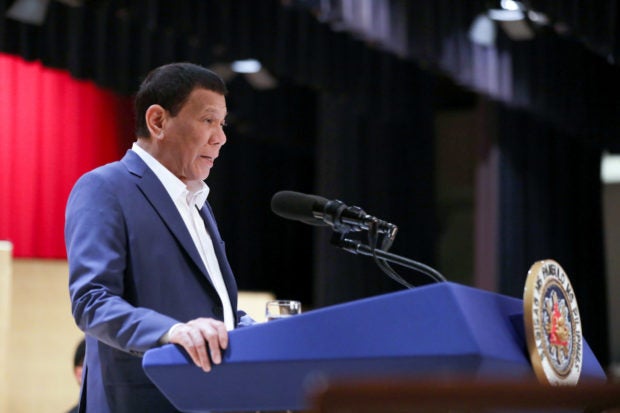 BEIJING–President Duterte has guaranteed Chinese business leaders that their investments in the Philippines will yield profits as he offered them protection from corrupt public officials.

Addressing a business forum here on Friday night, the President said his administration has adopted measures to make it easier for Chinese enterprises to conduct business in the Philippines.

To entice them in infusing more capital in the local market, Mr. Duterte said be would even open his own home to Chinese executives having problems with their businesses.

“You are interested in profits. We will guarantee your ROI (return of investments),” the President told the gathering held at the Grand Hyatt Hotel.

“(If) you take your money away or if you want to go or transfer, do not worry. We will not make it hard for you,” he said. “That is a promise which I give to you.”

“It is not our money. It is your money. If you want to go out, if you are not satisfied or if you are losing, then by all means tell us. (You will get) your money without any disturbance at all,” he assured the Chinese business executives.

Besides ensuring the profitability of their businesses, the President also informed the Chinese investors of his administration’s tough stance against graft and corruption in the bureaucracy.

Veering off from his prepared speech, the Chief Executive said he would directly deal with corrupt government officials who would try to demand grease money from Chinese businessmen.

Despite his repeated warnings, several ranking officials appointed by the President had been implicated in top-level corruption, the latest of which was the multimillion-peso irregularities in the Philippine Health Insurance Corp.

Mr. Duterte himself and his family have been accused of amassing unexplained wealth, an allegation he had flatly denied as part of an alleged plot to discredit and unseat him.

“If you or your agents encounter an official asking for (money), you just tell me and I will call that official… in my office,” he said.

“Kindly bring some old money and coins with you. I will tell the official to eat the money and swallow the coins in your presence,” Mr. Duterte said, eliciting applause from the crowd.

The President has embarked on a five-day official visit in China and met with ranking Chinese officials in a bid to resolve the long-drawn maritime dispute between China and the Philippines in the South China Sea.