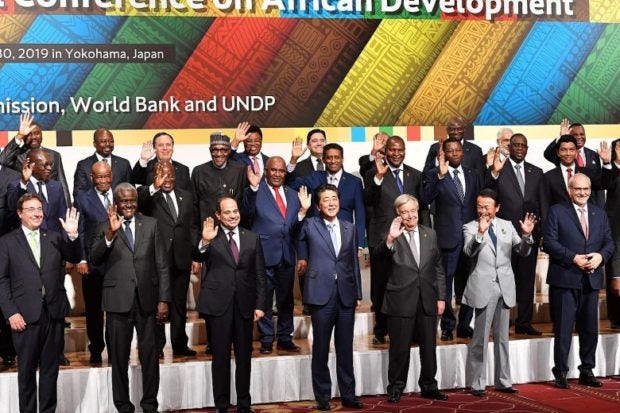 TOKYO — Prime Minister Shinzo Abe has vowed to boost private investment in Africa to spur its development, amid Japan’s rivalry with China for influence in the region.

In a speech at the seventh Tokyo International Conference on African Development, Mr Abe pledged to ensure private investment for the next three years will surpass the US$25.6 billion that has been invested in the continent since 2016.

“We will take every step to help Japanese companies make inroads in Africa,” he said.

Japan aims to train 3,000 people over six years under a human resource development programme for the continent, such that there will be a steady stream of talent who can contribute to business ties between Japan and Africa.

This year’s conference, held in Yokohama, has taken on a more business-centric tone as Japan changes its view of Africa from a recipient of development assistance to that of a business partner.

About 10 percent of Japan’s official development assistance annually goes to Africa, and the huge potential for the region’s economic growth has not gone unnoticed.

The African population is set to double to 2.5 billion in 2050, amid the rapid growth of new technologies from e-commerce to drone deliveries, even as some 400 million people still live below the poverty line. But Japan’s direct investment in Africa of US$8.7 billion in 2017 pales in comparison to China’s US$43 billion.

Singapore’s Emeritus Senior Minister Goh Chok Tong, who is attending the conference at the invitation of Mr Abe, stressed the importance of planned and smooth leadership succession in ensuring durable economic growth.

“Politics and economics are like two sides of the same coin,” Mr Goh said at a plenary session. “Investors will not commit huge sums of capital which takes many years to recover unless there is political stability and policy consistency.”

He hoped Singapore’s growth story can be a model for African countries. “Singapore, like many countries in Africa, comprises people of different ethnicities, languages and religions,” he said, though with the caveat that African nations are bigger and more diverse than Singapore.

“Our first and most pressing task in nation-building was to unite them to live in harmony and work together for the country. We did but this is always work in progress.”

He urged countries to ensure a stable and consistent policy regime and to strengthen local businesses, like in Singapore’s case. “We do not implement populist or protectionist band-aid policies to win votes.”

More than 10,000 African officials have taken part in the Singapore Cooperation Programme, Mr Goh noted, as he commended the strides made by the continent in the African Continental Free-Trade Agreement, signed by 54 countries and in force among 27 states, which he called “an unprecedented step in economic integration”.

Such integration is key to helping Africa achieve sustainable growth, which Tokyo wants to cement by encouraging more private-sector investment. Japan has touted the quality of its infrastructure and transfer of know-how as its competitive advantage over China.

Leaders and representatives from some 50 African nations at the three-day conference are expected to adopt a joint declaration tomorrow. Kyodo News reported that the document will express concerns over excessive debt among African countries.

This is seen as a veiled allusion to China, which has been accused of “debt trap diplomacy” in its granting of large loans to developing countries that cannot pay off the debt, for infrastructure projects.

Mr Masahiko Kiya, deputy director-general of African affairs and international cooperation at the Foreign Ministry, told a recent news briefing that Japan has an edge over China when it comes to infrastructure “life cycle cost” and human resources development.

He noted: “Just handing over the equipment or infrastructure does not mean the end of the project.”

In response to a question from The Straits Times on the Sino-Japan rivalry, Mr Kiya said Japan sees China’s role in African development as very important.