Coca-Cola, Davao City LGU work together to make a World Without Waste possible

For many years now, Coca-Cola Beverages Philippines Inc. (CCBPI) has found a home in Davao. With two of the Company’s bottling plants in the region, Coca-Cola has continuously gone beyond the FOUR WALLS of its manufacturing facilities to work with communities and local government UNITS, with a goal of refreshing the lives of Davaoeños.

This year, Coca-Cola is sharing its World Without Waste vision and its goal of helping further improve the beautiful city into a cleaner, greener, and more sustainable destination.

Through sharing its World Without Waste vision, Coca-Cola aims to further its long-term partnership with the local government of Davao. This will involve strengthening the PET bottle collection efforts in the city through a multi-stakeholder approach that unites the public and private sector. The Company aims to set up collection systems across the city and work with a local recycling technology partner, Winder Recycling, to give its packaging a new life, a new purpose—a process based on the circular economy model.

“Today, we are also launching the #betterbottlechallenge,” said Atty. Juan Lorenzo Tañada, CCBPI Public and Corporate Affairs Director. “We want to illustrate and emphasize that used PET bottles are not trash—and therefore these should not end up littering the streets or in landfills, or polluting our waterways. They have value beyond their initial use, as long as we properly segregate and DISPOSE OF them. In this case, throw them into our collection bins so they become better bottles, ONCE they are recycled”.

Earlier this year, Coca-Cola partnered with the Davao local government to implement its green initiative during the week-long Davao Region Athletic Association (DAVRAA) 2019, the Araw ng Davao celebration, and the Palarong Pambansa. Through these efforts, Coca-Cola was able to collect and properly divert almost 800kg of used PET bottles, both from Coca-Cola and from other beverage brands. Further to this, just recently, Coca-Cola has worked with Bantay Dagat, a group formed by Mayor Sara Z. Duterte-Carpio, in properly diverting 500kgs of used PET bottles which the group collected over time in their cleanups.

“Our World Without Waste initiative may be an ambitious goal, but it is possible to achieve if all stakeholders—from the government, industry partners, to our consumers—would participate” said Atty. Tañada. “With this long-term partnership with the Davao LGU, and with the hope of enjoining all Davaoeños to take part in this initiative, the possibilities are limitless. ”

IN AS MUCH AS PET bottles are sought after—collected, sold to junk shops, and FIND their way into being recycled into textile or other products, BEING high-value plastic and highly recyclable—Coca-Cola ensures a closed loop by diverting the collected PET to Winder Recycling, where it is processed and given new purpose. Winder Recycling— a Davao-based recycler and partner of Coca-Cola for this endeavor—will be transforming these post-consumer PET bottles into school chairs, benches, and even trash bins—making sure that they don’t lose value.

These recycled plastic chairs are guaranteed to last up to 20 years—at least five years longer than the normal lifespan of wooden chairs. Winchester O. Lemen, Managing Partner of Winder Recycling Company, said, “We are proud to partner with Coca-Cola here in Davao City, in working for solutions to the urgent waste problem. CLEARLY, Coca-Cola’s support of the local recycling industry is, I believe, proof positive that the Company is walking the talk, and that they are making considerable strides IN MAKING their vision of a World Without Waste possible in Davao City.”

Coca-Cola has set up World Without Waste installations— spaces where Davaoeños can recycle, refresh, and relax—  that feature the beverage brand’s iconic bottle collection bin, benches made from 1,000 recycled PET bottles each, and a collection bin made from 600 recycled PET bottles, in five major parks: People’s Park, Rizal Park, Botanical, Magsaysay Park, and Sta. Ana Wharf. Sixty (60) bins were also donated by Coca-Cola to several smaller parks around the city.

With each initiative, Coca-Cola strives to continue working closely with its partners in Davao to create a more sustainable system that will help the city grow and thrive, and become a World Without Waste model to emulate across the entire country. 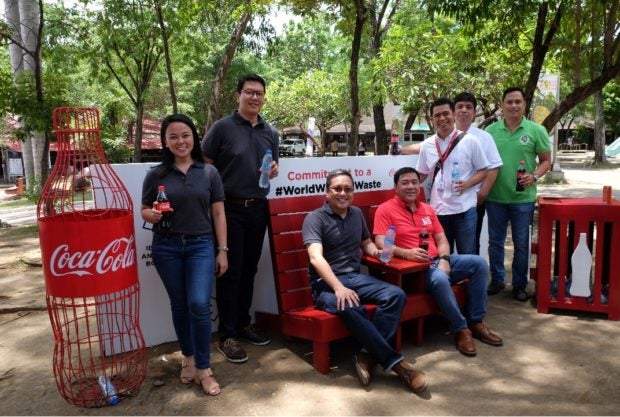