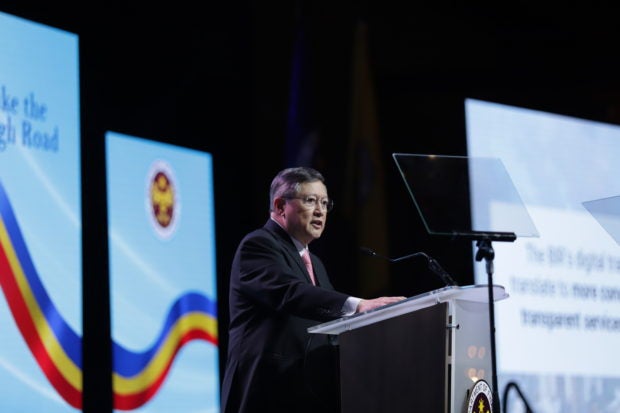 MANILA, Philippines — The Asian Development Bank’s support for the Philippine government’s infrastructure buildup program underscores the strong partnership between the multilateral lending agency and the Philippines, the head of the Duterte administration’s economic team said on Monday.

In a press statement, Finance Secretary Carlos Dominguez III also lauded the ADB — under the leadership of its president, Takehiko Nakao — for exploring ways of forging closer coordination with the World Bank to better respond to the needs of countries in the Asia-Pacific region.

“We are accomplishing a lot because ADB is 100 percent behind us, especially with this assistance for the Malolos-Clark Railway Project and the secondary education support program,” the Finance chief told Nacho during a recent meeting. “It is proof that the institution is very supportive of our growth.”

In particular, Dominguez cited ADB’s $2.75-billion financing for the construction of a 53.1-kilometer passenger railway connecting Malolos in Bulacan to the Clark International Airport in Pampanga, which is the multilateral institution’s single largest infrastructure investment in any of its member countries.

Nakao, for his part, informed Dominguez that the ADB heeded the Finance chief’s proposal to set up an expert advisory group for digital technology within the bank, which would prove useful in improving the way ADB delivers assistance to its member countries. ADB has invited Dominguez to take part in its first meeting set in September.

Dominguez welcomed the ADB’s positive response to his proposal and expressed interest in joining the first meeting of the Thematic Group. This could prove beneficial for the Philippines’ ongoing efforts to digitalize, among others, the government’s frontline services, tax collection, and payment systems, as well as in tapping agricultural technology to rev up the farm and fisheries sector.

Because of this, representatives from the ADB, World Bank and the Philippines’ Department of Finance met last May to discuss how the two multilateral institutions can streamline processes in delivering aid to the region.

Interns, seniors allowed to go out for essential travel during GCQ — Eleazar