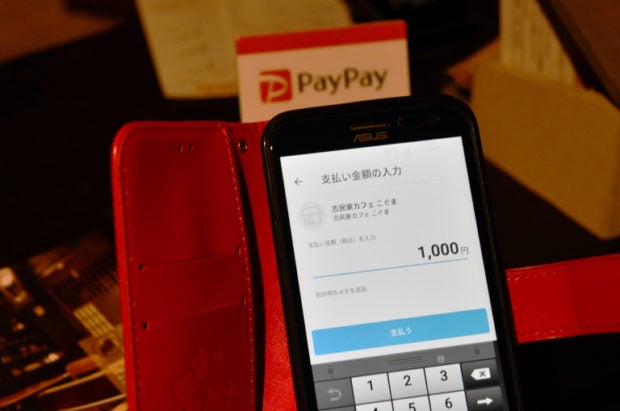 This photo taken on July 25, 2019 shows a transaction for payment via PayPay, a tie-up between Softbank and Yahoo, by using a smartphone at a Koguma restaurant in Tokyo. Once a pioneer in cashless transactions, Japan is lagging behind as the world’s biggest economies increasingly embrace electronic payments because its aging population still prefers physical money. Image: AFP/Toshifumi Kitamura

Once a pioneer in cashless transactions, Japan is now lagging behind as the world’s biggest economies increasingly embrace electronic payments, because its aging population still prefers physical money.

Four out of five purchases are still made with cash in Japan, despite its reputation as a futuristic and innovative nation. In South Korea, some 90 percent of transactions are digital, while Sweden aims to be a cashless society as early as 2023.

But in Japan, where crime and counterfeiting is virtually non-existent so people feel more comfortable carrying cash, consumer response has been sluggish.

At Katsuyuki Hasegawa’s bike repair shop customers are invited to settle their bills using PayPay, a tie-up between Softbank and Yahoo, using a QR code via their smartphones.

But only “two or three” people a week are using the service, Hasegawa tells AFP.

“In a place like this, everything is very slow. We get lots of old people who like to chat while getting out their money. They don’t need quick transactions,” says the 40-year-old shopkeeper.

“Personally, I prefer cash. With PayPay, you don’t keep track of your money,” he adds.

With Japan becoming the first “super-aged” society with more than 28 percent of people 65 or over, it is harder to persuade consumers to take up new technology, according to Yuki Fukumoto, an analyst at the NLI Research Institute.

“The challenge from now on is how to motivate people” to change their habits, said Fukumoto.

This is a serious challenge in a country with more than 200,000 ATMs and where most small shops will only take cash to avoid high transaction costs.

Many were also put off when retail giant Seven & I Holdings suffered a hacking attack immediately after launching a new QR-code payment system and was forced to scrap the scheme.

Yet it was way back in the 1990s that Japanese firm Denso Wave developed the first QR codes now frequently used in cashless payments, while Sony has offered a chip used on public transport and for payments since the 2000s.

Payment cards for transport systems in Tokyo and other cities are also often used for small purchases from vending machines or convenience stores, but cash remains preferred for other transactions.

The Japanese government is hoping to seize on a wave of tourists expected to flood in for the 2020 Tokyo Olympics to double the amount of electronic payments to 40 percent by 2025.

It also plans to introduce a points system to partially reward customers paying by cashless means as a way to mitigate a controversial hike in consumption tax from eight percent to 10 percent from October.

Tokyo perhaps has an eye on the costs of such a dependence on cash, estimated by a Boston Consulting Group survey at two trillion yen ($18 billion) to maintain ATMs and transport money around securely.

Companies too are doing their best to promote a cashless society. Earlier in the year, mobile company Rakuten started “100% cashless” stadia for its baseball and football teams.

Akiko Yamanaka, who runs a chic restaurant called “Koguma” (“bear”), said a 10% discount introduced by PayPay for diners who settle the bill using their system had attracted several people.

“The more campaigns there are like this, the more people will convert to cashless,” said the 54-year-old.

And Rakuten boss Hiroshi Mikitani is convinced that the future is cashless, even in Japan.

“One day soon, money as we know it, notes and coins that we carry with us, will be as outdated and collectable as vinyl discs are now,” he stated in a recent blog.

Nevertheless, he admitted that “security has to be improved” for this to happen, especially in the wake of the QR hack. JB