This means trade war: Is Trump’s economic team up for it? 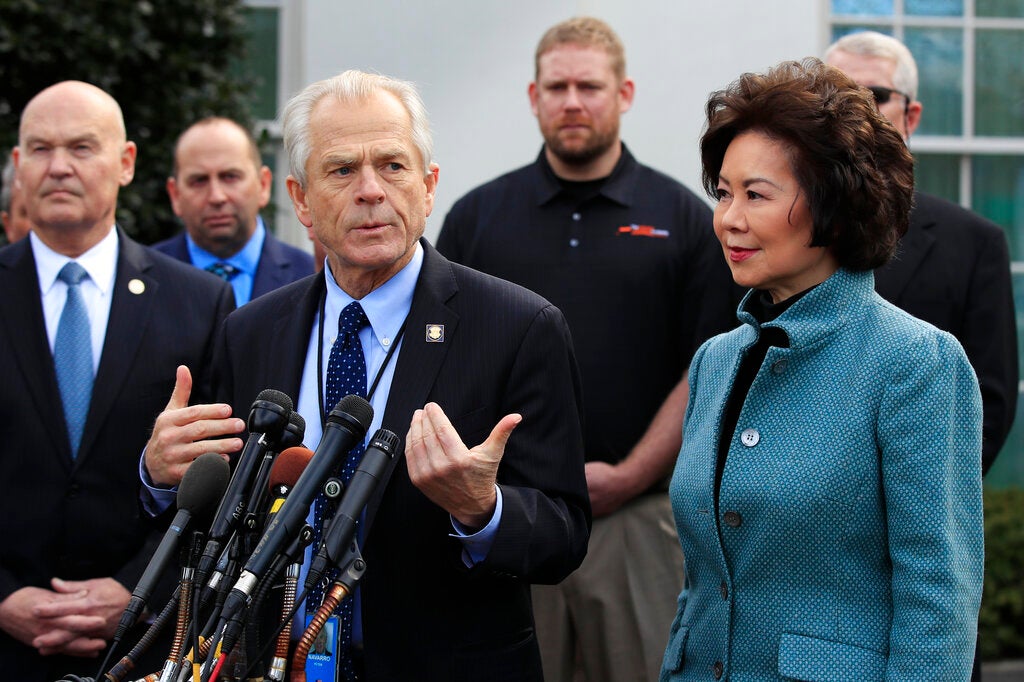 WASHINGTON — Facing a trade war against China that has shaken the global economy, President Donald Trump gathered his most trusted economic aides in the Oval Office.

The assembled brain trust for Friday’s urgent consultations included an economics chief best known for his stint as a cable TV commentator; a trade adviser whose pro-tariff views are outside the economic mainstream; and a treasury secretary (joining by phone on his way back from vacation) who made millions off the housing crisis and then turned to financing Hollywood movies.

Where past presidents have relied on top academics, business leaders and officials with experience in prior administrations, Trump has gone a different route, building a crew of economic advisers known more for their allegiance to him than their policy chops.

Now, facing a test caused largely by Trump’s determination to force China to provide the U.S. with better trade terms, questions are mounting about whether the team is up to the challenges that lie ahead — and whether Trump would listen to them anyway.

The key for any president in a moment of economic uncertainty is to have a talented team of advisers he can listen to and trust, said Austan Goolsbee, a University of Chicago economist who was a top aide to President Barack Obama.

“The tougher the situation, the more important it is to have good advisers,” Goolsbee said. “But President Trump does not show any sign of listening to economists, so it probably doesn’t matter who is on the econ team. But, boy, is that a scary idea if we are going through a serious downturn.”

As Trump’s concern over the economy has grown, so has the pool of voices from which he seeks advice.

He has called prominent friends like New England Patriots owner Robert Kraft and Fox Business Network host Lou Dobbs. He praises surrogates’ appearances on television after they praise his handling of the economy. And he grouses about the quality of the advice he is receiving from aides, according to two Republicans close to the White House who spoke on condition of anonymity because they were not authorized to speak publicly about private conversations.

A big focus of Trump’s team has been messaging — convincing the public there is no reason for alarm, despite a decline in factory output, the volatile stock market and the recent drop in consumer confidence.

The aides point to consumer spending and the low 3.7% unemployment rate born out of the decade-plus expansion as reasons why a downturn is unlikely, yet their devotion to the president’s desire to project strength has at times strained their own credibility.

Larry Kudlow, the president’s top economic adviser and a former CNBC commentator, said on CNBC that 2017’s $1.5 trillion worth of tax cuts had “virtually paid” for themselves through stronger growth — even though the budget deficit has jumped more than 20% this year.

Treasury Secretary Steve Munchin told reporters ahead of the 2018 elections that a separate middle-class tax cut was being developed, but it never materialized as promised.

Trade adviser Peter Navarro, a cheerleader for tariffs, told CNN this month that the tariffs are “not hurting anybody here” — even though Home Depot, Macy’s and other companies have warned about the damage to corporate profits and academic research has quantified a cost being borne by U.S. consumers.

Trump, for his part, has tried to put the blame for the recent turbulence on Federal Reserve Chair Jerome Powell, whose credibility and political independence is deemed crucial for calming financial markets worldwide. Trump remains frustrated with Mnuchin for recommending Powell — one reason some think acting chief of staff Mick Mulvaney has taken on an increasingly active role.

Trump’s team has its fans.

Stephen Moore, a longtime Trump economic adviser whose nomination to a seat on the Federal Reserve board was pulled, praised Kudlow as “spectacular” and said Mulvaney’s role advising Trump on the economy has been underappreciated. He called Mulvaney probably the second most important economic voice in the administration.

“Everybody’s concerned about the fact the economy’s slowed down,” said Moore, who thinks the problem has been overstated. “I think people are going to look foolish a couple of months from now.”

Trump originally chose Gary Cohn, a former Goldman Sachs president, to run the National Economic Council and Kevin Hassett, a Ph.D. economist with a respected track record, to oversee the Council of Economic Advisers. But both have left since White House.

The risk for Trump isn’t necessarily a recession, but a slowdown in growth that undermines his promise to voters that the economy has been renovated for the better under his watch.

Trump pledged consistent growth of more than 3% annually, yet the Congressional Budget Office forecast Wednesday that it will be closer to 2% in 2020 and drifting further downward in the years to come.

An organic slowdown in growth — not even a recession — would be tough on Trump’s reelection chances and he knows it, which is why he has aides talking up the economy on TV as he repeatedly hammers the Fed, said a former senior White House official who spoke on condition of anonymity to discuss private conversations.

The surest relief Trump could offer on the economy would be backing off the trade wars with China. But for the moment, the president is headed in the opposite direction, announcing increased levels of tariffs on Chinese goods Friday.

The Trump White House appears to be conducting its economic policy on a more improvised basis than past administrations, said Douglas Holtz-Eakin, former director of the Congressional Budget Office and president of the center-right American Action Forum.

He added that the president is getting a real-time lesson that a market economy seldom follows orders.

“They are learning the painful truth, which is the White House doesn’t run the economy,” Holtz-Eakin said. “This is the United States and the economy is a large, multifaceted animal that runs on its own.”