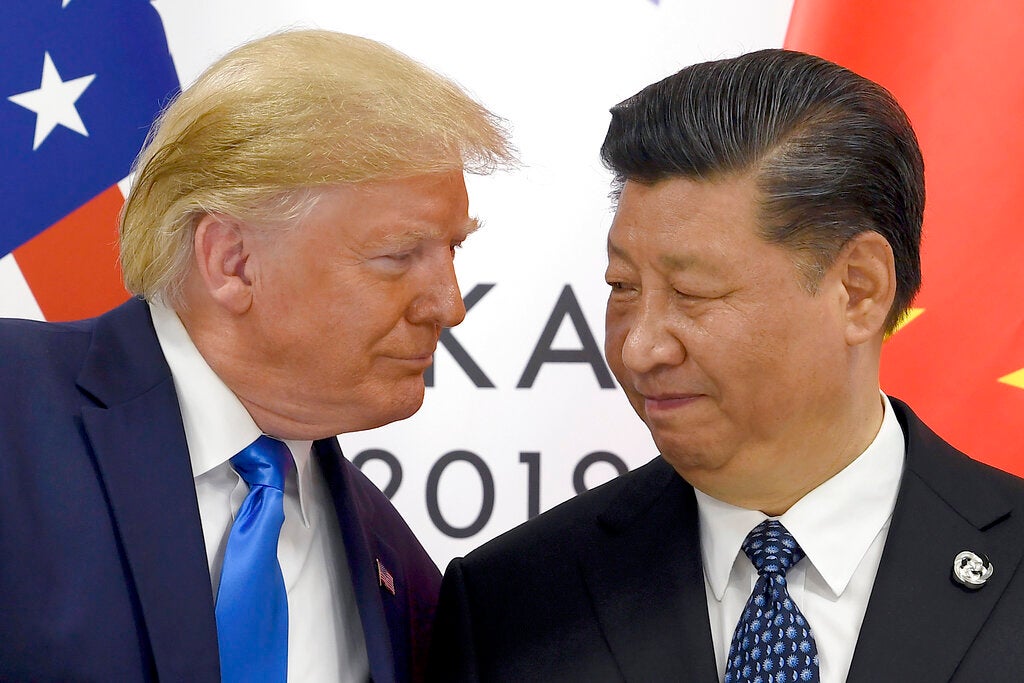 President Donald Trump, left, meets with Chinese President Xi Jinping during a meeting on the sidelines of the G-20 summit in Osaka, Japan in this June 29, 2019 file photo. China has announced it will raise tariffs on $75 billion of U.S. products in retaliation for President Donald Trump’s planned Sept. 1 duty increase in a war over trade and technology policy. (AP)

The move came hours after Beijing said it would hike tariffs on $75 billion in U.S. imports, escalating a conflict over trade and technology that threatens to tip a fragile global economy into recession.

Though expected, the president appeared caught off-guard by China’s Friday action, and was angry when he gathered with his trade team in the Oval Office before departing for France, according to two people familiar with the meeting who spoke to AP on condition of anonymity because they were not authorized to disclose closed-door conversations.

The rising tensions between the world’s two biggest economies sent the stock market into a tailspin. The Dow Jones Industrial Average closed down 643 points — before Trump announced the new tariffs.

Trump’s latest escalation will impose a burden on many American households. Even before he announced an increase Friday, J.P. Morgan had estimated that Trump’s tariffs would cost the average household roughly $1,000 a year if he proceeded with his threats.

Businesses large and small joined in a chorus of opposition to the intensifying hostilities.

“It’s impossible for businesses to plan for the future in this type of environment,” said David French, senior vice president of government relations at the National Retail Federation. “The administration’s approach clearly isn’t working, and the answer isn’t more taxes on American businesses and consumers. Where does this end?”

By adding onto the Chinese imports he’s already targeted, Trump is extending his tariffs to just about everything China ships to the United States.

China responded Friday with new tariffs of 5% and 10% on $75 billion of U.S. products in retaliation, deepening a conflict over trade and technology that threatens to tip a weakening global economy into recession.

Like Trump’s, the Chinese tariffs will be imposed in two batches — first on Sept. 1 and then on Dec. 15.

China will also go ahead with previously postponed import duties on U.S.-made autos and auto parts, the Finance Ministry announced.

On Friday, Trump tweeted, “Our great American companies are hereby ordered to immediately start looking for an alternative to China, including bringing… your companies HOME and making your products in the USA.”

The White House did not immediately respond to questions about what authority the president believes he has to order private companies to change their business practices.

French at the National Retail Federation said it was “unrealistic for American retailers to move out of the world’s second largest economy … Our presence in China allows us to reach Chinese customers and develop overseas markets.

It was an “unprecedented statement for a president to make to private business when there is no national security issue involved,” he said.

The trade war between the U.S. and China has been rattling financial markets, disrupting international trade and weakening prospects for worldwide economic growth.

Washington accuses China of using predatory tactics — including outright theft of U.S. trade secrets — in an aggressive drive to turn itself into a world leader in cutting-edge technologies such as artificial intelligence and electric cars.

Twelve rounds of talks have failed to break the impasse, though more negotiations are expected next month. Chinese leaders have offered to alter details of their policies but are resisting any deal that would require them to give up their aspirations to become a technological powerhouse.

The two countries are also deadlocked over how to enforce any agreement.

China’s announced tariff hikes — and Trump’s response — is the latest sign that both countries are digging in. 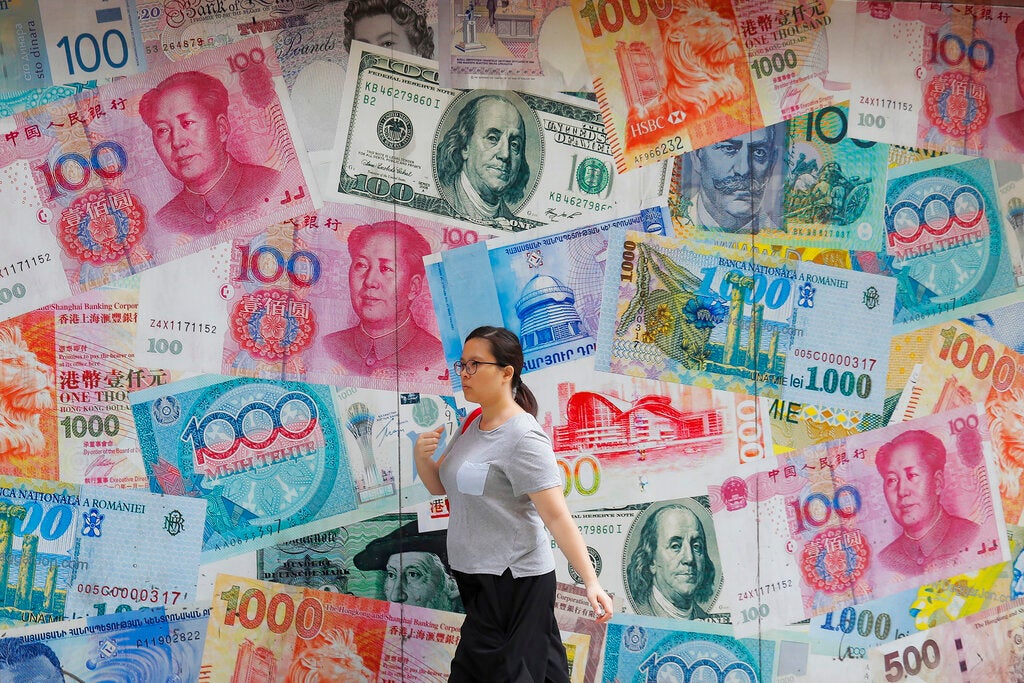 FILE _ In this Aug. 6, 2019, file photo, a woman walks by a money exchange shop decorated with different countries currency banknotes at Central, a business district in Hong Kong. China has announced it will raise tariffs on $75 billion of U.S. products in retaliation for President Donald Trump’s planned Sept. 1 duty increase in a war over trade and technology policy. (AP Photo/Kin Cheung, File)

“China is signaling yet again that it has no intention of backing off from the trade war, further reducing the likelihood of the U.S. and China agreeing on any sort of trade deal in the coming months,” said Cornell University economist Eswar Prasad, former head of the China division at the International Monetary Fund.

The Chinese said tariffs of 25% and 5% would be imposed on U.S.-made autos and auto parts on Dec. 15. Beijing had planned those tariff hikes last year but temporarily dropped them to keep the talks going.

BMW, Tesla, Ford and Mercedes Benz are likely to be the hardest hit by the Chinese auto tariffs. In 2018, BMW exported about 87,000 luxury SUVs to China from a plant near Spartanburg, S.C. It exports more vehicles to China than any other U.S. auto plant.

Together, Ford, BMW, Mercedes and others exported about 164,000 vehicles to China from the U.S. in 2018, according to the Center for Automotive Research, a think tank in Ann Arbor, Michigan. Most of them are luxury cars and SUVs with higher profit margins that can cover higher U.S. wages. The exports are down from about 262,000 in 2017.

Tesla, which is building a plant in China, last year got about 12% of its revenue by exporting about 14,300 electric cars and SUVs from California to China, according to Barclays. Most of Ford’s exports are from the Lincoln luxury brand, but most of the vehicles it sells in China are made in joint venture factories.