A renewed collection of Lea Salonga’s most iconic pieces

Lea shines in her first laundry musical with the new Ariel Instashine
By: INQUIRER.net BrandRoom - @inquirerdotnet
11:43 AM August 16, 2019 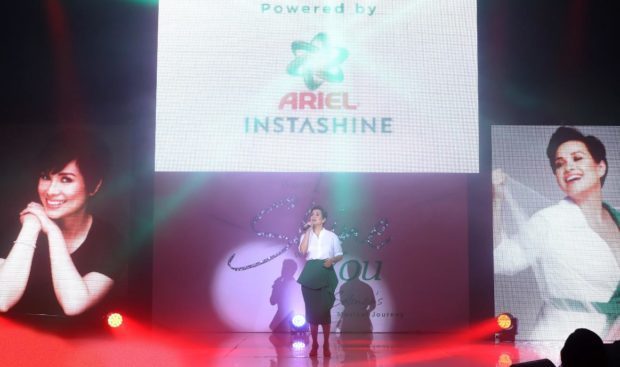 World-class talent Lea Salonga serenades the crowd as the new Ariel Instashine’s ambassador last August 1, Thursday, in her first-ever laundry musical that showcased her most iconic pieces of clothing and how she continues to keep them shining anew.

Globally acclaimed artist and Filipino icon, Lea Salonga, returns home this August as she stars in her first-ever laundry musical – “When I Shine With You”, telling the story of Lea’s most iconic pieces of clothing and how they keep shining anew.

This once-of-a-kind musical also featured performances of Lea’s The Voice mentees as they relive her journey through some of her memorable clothes in the past; and digital parenting icons Maggie Wilson, Kelly Misa and Cat Arambulo who likewise recalled meaningful experiences through clothing pieces that are now like what they once were – shining and new. 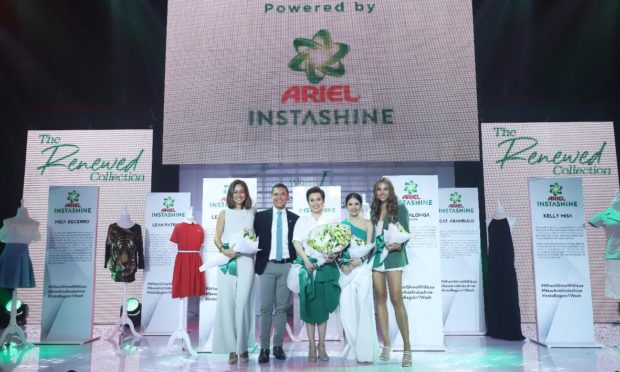 Cat Arambulo- Antonio – first-ever Filipina judge in the biggest design reality TV series in Asia, The Apartment: Passion for Design – showcased a dress that deemed her one of the best-dressed women in the country.

“This dress means so much to me. I used this outfit when I received the award for being one of the best-dressed women in the Philippines. It’s a timeless dress I’ve worn several times, and each time reminded of the significance it holds for me and the way it inspires me to make more shining moments like this,” Cat shares.

Model, vlogger, TV host Kelly Misa brings a sentimental piece passed on to her by her grandmother, “My grandmother mostly wore easy basics that always looked fresh, clean and new. When I wear this article of clothing, I feel like I make her proud that’s why it’s important to keep it always looking new. This serves as a constant reminder for me – for the way brought shine to my life; and how, to this day, her memory brings me unceasing inspiration.”

Maggie Wilson, British-Filipino TV personality, actress and entrepreneur, parades the outfit she wore as she crossed the finish line at the Antarctic Ice Marathon, “In 2017, I became the first woman to run a marathon in Antarctica. For someone who’s not fond of running, I managed to push through from all the doubts and voices in my head telling me I can’t do it. It’s important because it’s a reminder I can conquer and shine in any situation I set my mind to.”

When I Shine with You is a sensorial, nostalgic journey

Every piece of clothing has a story. In this one-of-a-kind musical, Lea takes us on a journey down memory lane by telling the story behind some of her most treasured clothes in her iconic roles. With a history of more than four decades in the industry, she had her first break at 9 years old when she played the title role in Annie in 1980.

“Annie was my first big break. I was 9 then and felt a big mix of happy, scared and really just enjoying myself. Tt’s why I kept my dress after all these years: to remind myself of that girl who believed she could shine,” Lea shares.

Since her debut, Lea appeared in a number of theatre productions and had several television projects until 1989 when she was selected to play Kim in the debut production of the musical Miss Saigon in London. This role earned her the title as the first woman of Asian descent to win the Tony Award for her excellence in live Broadway Theatre in 1991.

She adds, “I had no idea how demanding it was going to be to play the role of Kim. As a teenager, I found it worth it because it pushed me to be more creative and thoughtful with my craft. That’s why I’ll always find the shirt I wore to the audition memorable. It may seem like a simple white one but it means a lot to me – it was the one that helped me shine and live my dreams.”

Among all the roles she played and amid her past accomplishments, Lea takes pride the most in being a mom to her daughter Nicole, “There’s so much love and reward in being a mother. It’s definitely a new chapter for me, and one of the best roles that I have the privilege of playing.”

Reminiscent of the new Ariel Instashine’s clothes renewal benefit, the musical sparked a renewed sense of inspiration as Lea relived the highlights of this true-to-life musical journey through her memorable clothes – from when she played Annie, to her white shirt during her audition for Miss Saigon, and an apron she got when she was a new mom.

“Through stains and messy times in the kitchen, this apron marks one of my life’s biggest role – being a mom to Nicole. It’s the role that no one could have ever prepared me for. It’s continuous hard work but it brought so much joy and love to my life. It’s inspiring me to shine brighter every day for my family,” Lea says.

These iconic clothes were brought back to life and showcased though Ariel Instashine’s Renewed Collection on stage.

As the newest addition to Ariel’s growing family, Lea Salonga is the ambassador for the new Ariel Instashine – the next generation of detergent that promises to make old clothes look new again in just one wash.

“We are delighted to welcome Lea Salonga to Team Ariel as we launch our New Ariel Instashine – the world’s first detergent with Power Boosters. Lea represents progressive Filipinas who continue to shine not just in the PH, but also on the global stage.” shares P&G Asia Regional Brand Communications Lead Louie Morante.

The new Ariel Instashine is the most recent laundry detergent innovation from Ariel that was launched in June. It provides superior cleaning and stain removal in just one wash backed by its power booster beads that help make clothes look new again.

“We launched the new Ariel Instashine in the PH market in high hopes of addressing 6 out of 10 unmet needs of Filipino laundry consumers – most of which seek superior cleaning and fabric renewal. As with our commitment to transform the laundry detergent industry, we also hope to bring inspiration through keeping clothing pieces valuable and timeless like Lea’s iconic pieces from her roles as Annie, Miss Saigon and as a mom,” concludes P&G Country Category Manager, Laundry Philippines, Ray Pine.

It’s a long ongoing journey for Lea filled with milestones that continue to give pride to the Philippines. Ariel celebrates this true Filipino icon as she shines for all of the Filipinos here and all over the world.

To find out more about When I Shine with You, the new Ariel Instashine and how you can make your old clothes look new again in one wash, follow the hashtags #NewArielInstashine, #InstaBagoin1Wash and #WhenIShineWithLea online.