Asian shares rise on US plan to delay some China tariffs

TOKYO – Asian shares were mostly higher Wednesday after the U.S. said it would hold off on tariffs of Chinese imports of mobile phones, toys and several other items typically on holiday shopping lists. 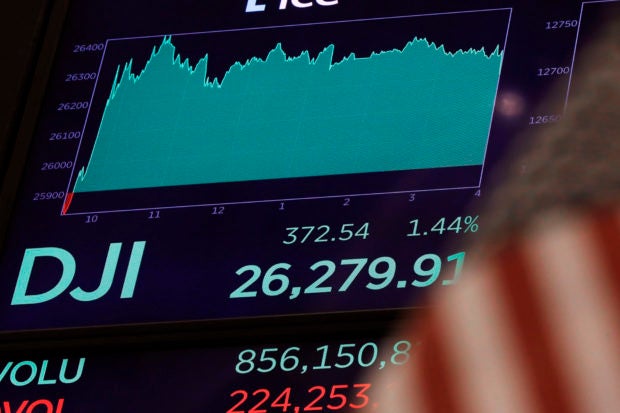 A board above the floor of the New York Stock Exchange shows the closing number for the Dow Jones industrial average, Tuesday, Aug. 13, 2019. Investors flipped back into buying mode Tuesday after the U.S. said it would hold off on tariffs of Chinese imports of mobile phones, toys and several other items typically on holiday shopping lists. (AP Photo/Richard Drew)

Also boosting investor sentiments were comments from China that the two sides held discussions on trade overnight and would talk again the next two weeks.

The markets have been in the spin cycle since President Donald Trump announced on Aug. 1 that he would impose 10% tariffs on about $300 billion in Chinese imports, which would be on top of 25% tariffs already in place on $250 billion of imports.

The threat dashed hopes that a resolution may come soon in the trade war between the world’s two largest economies, and investors have grown increasingly concerned that it may drag on through the U.S. elections in 2020.

On Tuesday, The Office of the U.S. Trade Representative said it would delay the tariffs on some products, including popular consumer goods, until Dec. 15. A few other products were removed altogether, including certain types of fish and baby seats.

But some analysts were cautious.

“Markets are responding with muted relief to the latest round in the trade saga – but nothing has really changed,” said Robert Carnell, chief economist head of research, Asia-Pacific, at ING.