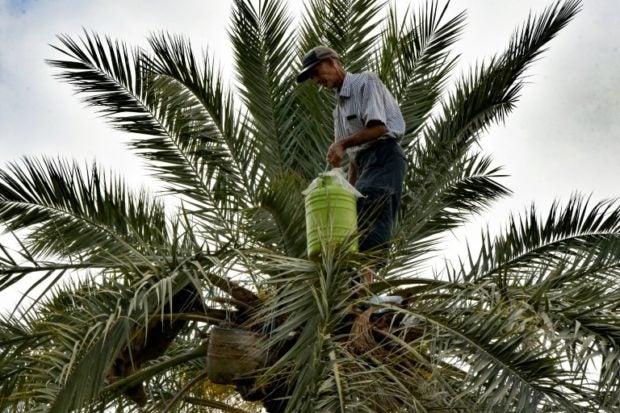 Legmi, a date palm drink, is found in southern Tunisia around the coastal city of Gabes. Image: AFP/Mourad Mjaied

As soon as the sun is up, people in southern Tunisia rush out to buy a glass or bottle of legmi, a coveted date palm drink that is too delicate to be sold far from the oasis.

At 7:00 a.m., at the busy Ain Slam roundabout in the center of the coastal city of Gabes, bicycles, cars and military vehicles are clustered around three men seated on plastic chairs.

Next to them are jugs brimming with the precious juice, a testament to the Gabes saying, “Even if the legmi attracts mosquitos, people will stick around.”

Favored particularly during the Muslim holy month of Ramadan for its high sugar content, this drink, typical of Saharan oases, is primarily consumed from March to October.

Many Tunisians enjoy legmi for breakfast, such as Akram, who has walked to the roundabout for the morning rush.

“We were born with legmi,” Akram said.

“My grandfather and my father produced it, my 1-and-a-half-year-old daughter has already drunk it, and me, I have even written a song about legmi,” said the singer, in his thirties. 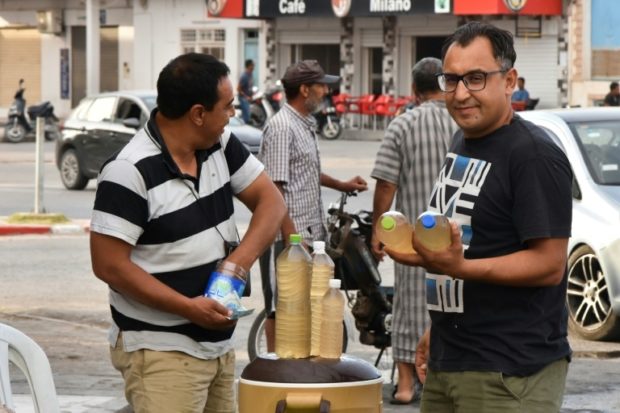 Storing legmi is complex as it turns rapidly into vinegar, so it cannot be sold far from the oasis. Image: AFP/Mourad Mjaied

Another customer, 30-year-old Haithem, described the drink as “part of our identity.”

A producer must have an expert hand and not be too greedy to draw the sap from the palm without killing it, he said.

One of the producers is Ridha Omrane Moussa, who describes himself as the “prince of the palm tree.”

Now in his sixties, he has harvested the nectar since learning the technique aged 14 from a relative in the Gabes oasis of Nahal.

Perched atop an 8 meter (26 foot) palm, cigarette between his lips, Moussa had just finished his harvest for the day. 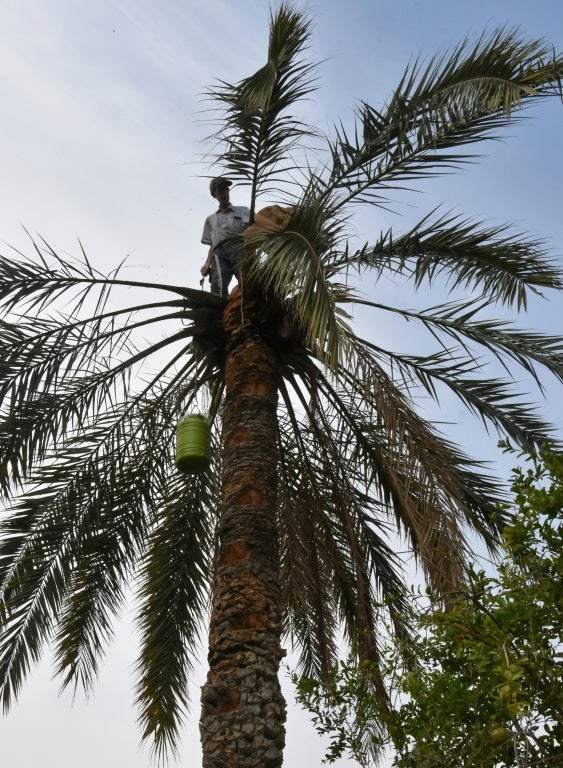 Legmi producers carefully cut the bark to cause a reaction from the palm that makes its sap rise. Image: AFP/Mourad Mjaied

To extract a daily take of 15 liters (3.9 gallons), he climbs the palms barefoot, using nothing but notches he made in their trunks.

He carefully cuts the bark to cause a reaction from the palm that makes its sap rise.

But “one must not touch the heart of the palm, otherwise, it dies,” Moussa warned.

He has 25 palm trees but harvests from each for just two and a half years before letting them rest for four years, producing around 8,000 liters annually.

Other than fresh, or “living” legmi, a fermented, alcoholic version of the drink is produced called “dead” legmi.

Back at the Gabes roundabout, Haithem described the alcoholic drink as “a young people’s game.”

“They do not have a lot of money to get drunk, so you pay one dinar and get dead legmi… but it is not good at all.”

In his youth, Haithem and others fermented living legmi for hours in a hut to produce their own alcohol.

“Everyday we tested it. We added herbs, mint… Until today, we do not know which one was the best because nobody agreed. Those are good memories.” 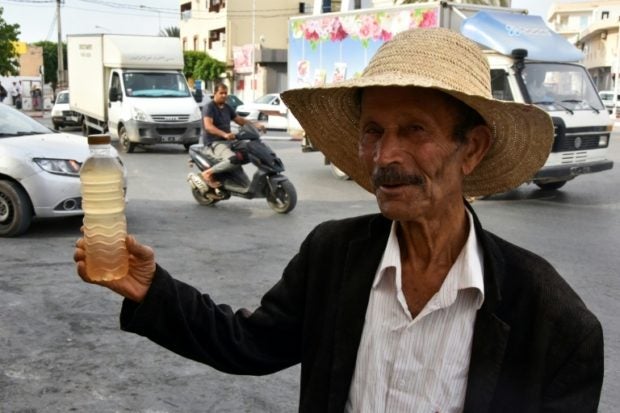 Legmi is especially favored during the Muslim holy month of Ramadan for its high sugar content. Image: AFP/Mourad Mjaied

Along with the harvesting, storing the drink is complex as it turns rapidly into vinegar.

To keep it fresh, bottles of ice are placed in the can that the sap flows into overnight, then the juice is immediately frozen until it is poured for sale.

This fragile process limits the consumption of legmi.

“Even in Sfax, there is none,” Haithem said, of the coastal city to the north.

“It has stayed organic, without any chemicals or ingredients for preservation, nothing.”

Some residents see its fragility and limited reach as a positive.

Haithem said that some were afraid, “If there is a lot of demand, what is going to happen? They are going to cut a lot of palms and risk losing the oases.”

Moussa, the legmi producer, warned that “chemical pollution from factories is a threat to the oases.”

State-owned Tunisian Chemical Group has been processing phosphate in the area since the 1970s and has been blamed for putting the oases at risk.

But for now, the future of legmi producers is assured.

“I taught my son this work so that this tradition stays in Gabes forever,” Moussa said. HM/JB

A waste of good wine? No, because spitting is essential to tasting