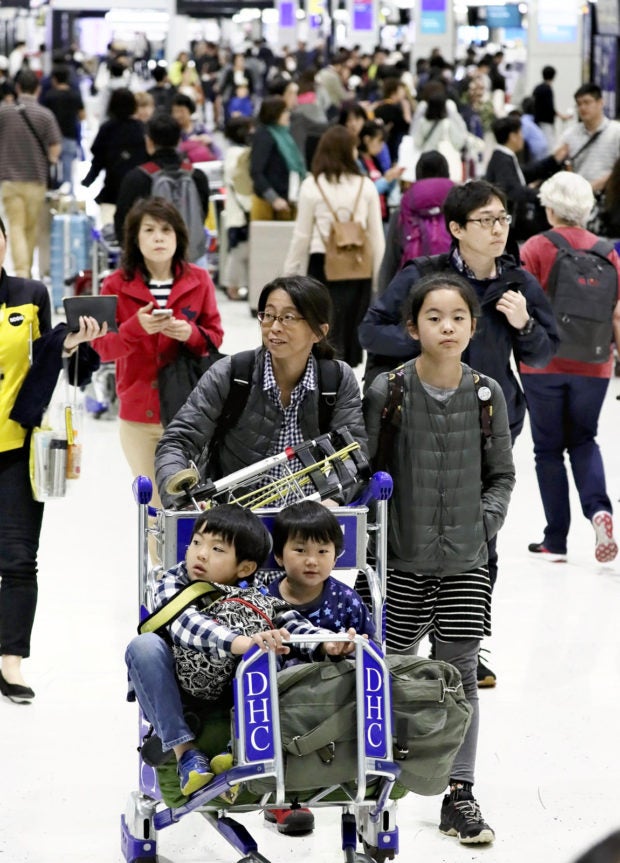 TOKYO — Japan’s preliminary gross domestic product in the April-June period showed growth higher than expected, supported by an increase in private consumption, but sluggish exports weighed on the growth.

The key challenge for Japan will be whether it can withstand headwinds of a planned consumption tax rate hike in October and intensifying trade friction between the United States and China.

The real-term economic growth rate in April-June increased 1.8 percent at an annualized rate, much higher than private research institutes’ projections of less than 1 percent. Pillars of domestic demand such as private consumption, which accounts for more than half of GDP, and capital investment were stronger than expected.

On a quarterly basis, real GDP rose 0.4 percent. Private consumption contributed 0.3 percent to changes in GDP. The unprecedented 10-day vacation period around the change of era from Heisei to Reiwa in May provided a tailwind for the economic growth.

According to a survey by the Internal Affairs and Communications Ministry, consumption expenditure per household (two or more persons) rose 4 percent in May in real terms, compared with the same month last year. It was the highest growth in four years, because of an increase in spending devoted to accommodations and airfares.

The number of domestic and overseas trips handled by the major travel agency JTB Corp. between April 25 and May 5, including the 10-day holiday period, increased by about 40 percent from the same period last year.

“Asian countries and Hawaii have been popular foreign destinations. On the domestic side, long-distance travel to destinations such as Okinawa and Hokkaido grew this year more than usual,” an official from JTB said.

KNT-CT Holdings Co., a major company in the travel industry that has travel agencies branded Kinki Nippon Tourist under an umbrella of firms, announced Wednesday that its operating income for April-June increased 45 times to ¥2.7 billion from a year earlier. Although last year’s profits were much lower than usual because of special factors such as the advance of the cherry blossom viewing season, the effect of the extended holiday period was apparent.

In addition, expensive items such as automobiles — a number of new models were introduced in the industry — and home appliances sold well as replacements. In anticipation of the consumption tax rate hike in October, there seemed to be last-minute demand.

Meanwhile, external demand, which represents exports minus imports, pushed down the real growth rate by 0.3 percent. Exports to China, which is at odds with the United States over trade issues, and to European Union countries with concerns over Brexit, were sluggish.

The breakdown by industry showed a 22.1 percent drop for transportation equipment, including automobiles, and a 29.9 percent decline for electronics.

“The conditions of the market remain difficult, partly because of trade friction between the United States and China,” said Seiji Kuraishi, executive vice president of Honda Motor Co., which saw a decline in new vehicle sales in the United States, at an Aug. 2 press conference.

U.S. President Donald Trump announced that the United States will expand its punitive tariffs on imports from China in September.

Toru Fukazawa, senior vice president of Toray Industries Inc., a major textile maker, showed concern over increased negative chain reactions at a press conference on Friday in which he said, “The impact of friction between the United States and China on the world economy as a whole will be significant.”