Marry Me at Marriott design continues to bedazzle 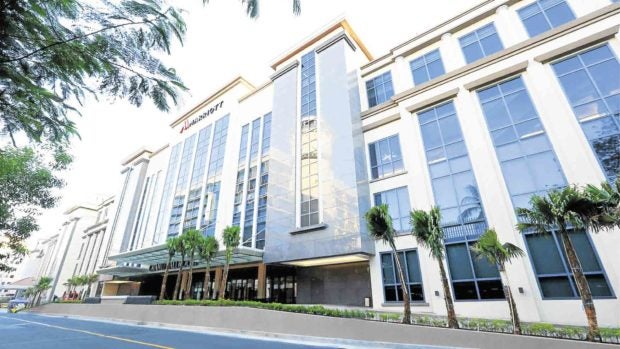 The state-of-the-art, pillarless Marriott Grand Ballroom was unveiled at the 2015 ‘Marry Me at Marriott’ event

The biggest, most anticipated event of the year was back for its 7th edition, with fresh, novel ideas for your special celebration.

The latest installment of ‘Marry Me at Marriott’ this 2019 proved to be even more exciting than its previous iterations, as it brought the best of romance for brides- and grooms-to-be.

To recall, when Marriott Hotel Manila unveiled its first ‘Marry Me At Marriott’ event in 2013, it was held at the hotel lobby with the vision of showcasing the best of Filipino bridal fashion set against the backdrop of the hotel’s luxurious amenities. 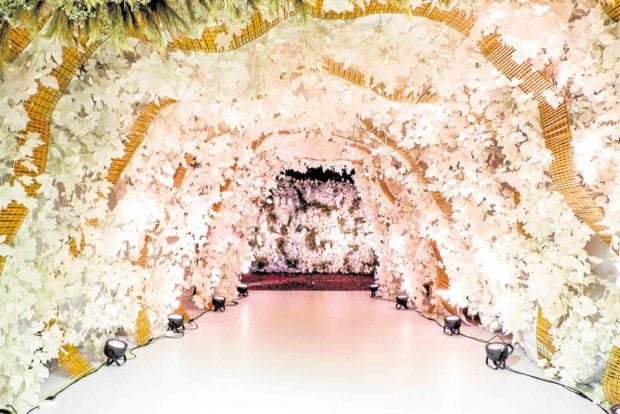 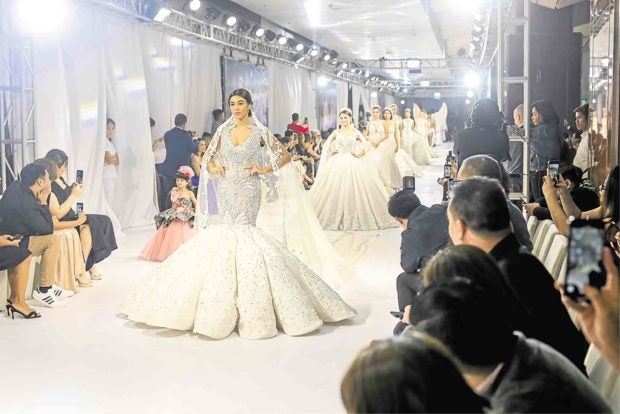 Like every romantic journey, it has undergone many memorable milestones—its second show in 2014 was at the Manila Ballroom, with fashion icon Frederick Peralta in a solo show that served as a visual feast, accompanied by a highly impressive 12-course sit-down Chinese lauriat.

The state-of-the-art, pillarless Marriott Grand Ballroom was unveiled at the 2015 ‘Marry Me at Marriott’ event, with its skyfold technology serving as the “curtain” that opened up the catwalk to the cocktail area. In 2016, the high ceiling was highlighted via a parachute drop of goodies to the delight of its VIP guests. To further underscore the vastness of the Grand Ballroom, a Mercedes Benz casually drove up the runway as the show opener in 2017, while at last year’s wedding event, the culinary team’s prowess came to the fore via a sit-down dinner that came complete with splendid wine-pairing choices.

For this year, one of the most exciting elements that was showcased was the Marriott Grand Ballroom being divided into three different wedding themes: Indian, Chinese and Western.

The three international sections were highlighted via the talents of the premier event styling collaborations of GMT Philippines, composed of Gideon Hermosa who designed the Western section and photowall; Michael Ruiz for Indian; and Teddy Manuel for Chinese where the Ting Hun offers of Man Ho were also showcased. 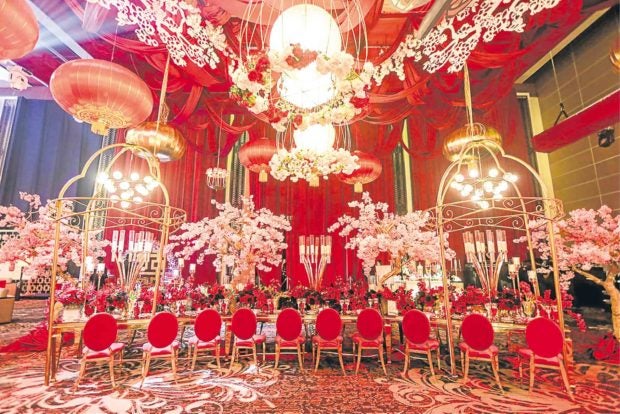 The Chinese section as styled by Teddy Manuel 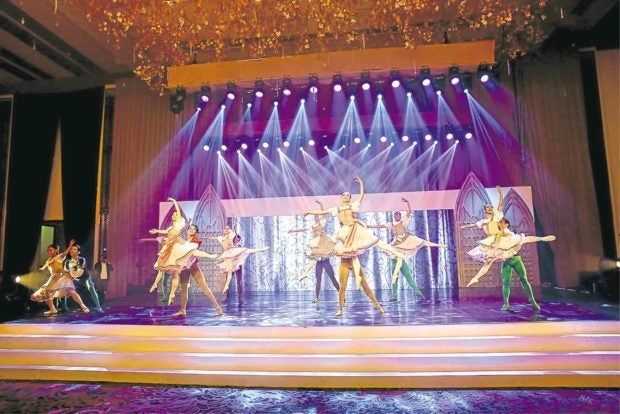 “We now have a new Indian chef on board and I think this will be the best way to introduce him to our local gourmands who are looking for authentic Indian cuisine. Indian weddings have become very popular in the Philippines, and we would like to show that we are the venue of choice, especially when it comes to our food,” Winton said.

“Chinese banquets for up to 2,000 people have been frequently (held) at the Marriott Grand Ballroom and we are proud to be able to offer the best in authentic Chinese cuisine here in Manila. Our Western offerings are equally irresistible as they feature organic produce, premium meats and sustainable seafood and these can also be enjoyed at our very popular Marriott Café and CRU Steakhouse. All of these are overseen by no less that our executive chef Meik Brammer,” Winton further explained. 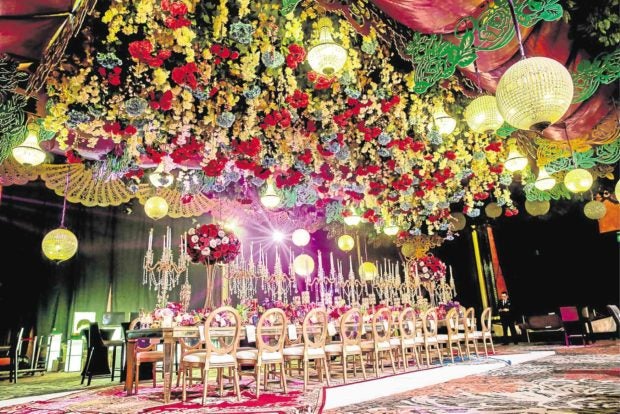 The Indian section as styled by Michael Ruiz 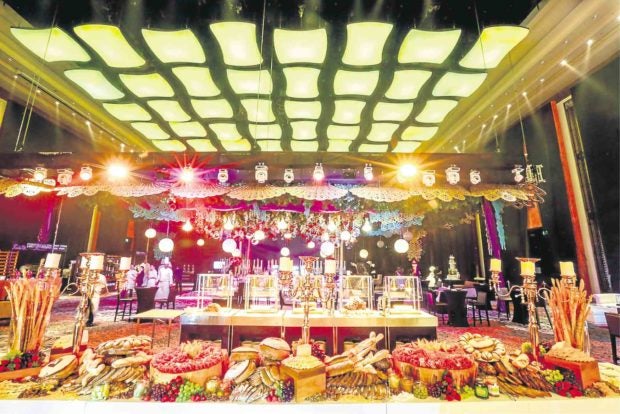 Among the impressive culinary offerings were two grazing tables in the Western area for appetizers and desserts. The first was laden with choice cheeses and cured meats, while the dessert table had luxurious treats such as molded chocolate in fun “makeup” forms, bride and groom cookies and wedding cake entremets. The Western Mains had oven roasted pork and beef served with oven roasted vegetable, truffle macaroni and cheese and ratatouille.

As in any wedding reception, one of the highlights that captured the imagination was “The Bride” wedding cake.

Standing 68 inches tall, with 75 inches in diameter, the cake was adorned with about 4,500 crystals, 150 edible roses, 40 peonies, and 1,200 florettes with hand-piped “embroidery.” At its base was 40 kg of sponge cake, with 10 kilos of ganache filling covered with 80 kilos of homemade fondant. All in all, it took 200 kg of sugar and two weeks to make, with three straight days of finishing.

Another sweet feast for the eyes was “The Swing,” which was inspired by a romantic 18th century oil painting by Jean Honore Frogonard, while the Marry Girl cake was inspired by the Chinese tradition of courtship in Guangdong, with a pastillage of peonies and fairy lights at its crown.

Romance on the runway

This year, the Marriott Grand Ballroom’s catwalk was graced by the creations of some of the country’s top designers, who presented their latest wedding collections. Leo Almodal explained that his inspirations are “couture, royalty, and fairytales,” perfect for his typical bride who loves to accentuate her curves and catch adulation through jewels and luxurious details on her wedding gown. 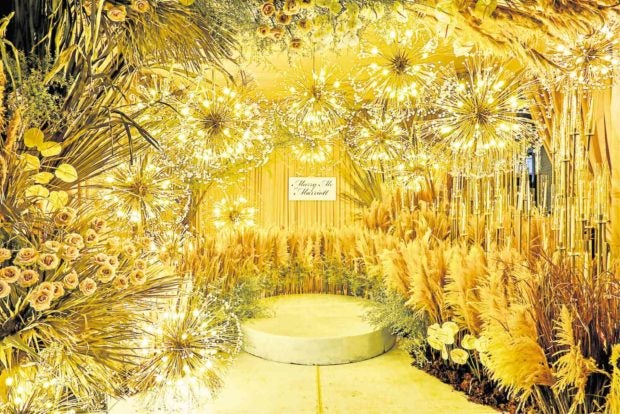 This year’s Africa accentuated photowall was designed by Gideon Hermosa

Albert Andrada’s latest collection features traditional and non-traditional couture for his brides and grooms, with his theme “Illuminati” that ranges from simple gowns in lace and beading to more structured, complicated choices for the adventurous bride along with tuxes in black, white and gray for his grooms. Jun Escario styled his collection from inspirations taken through several decades of fashion, ranging from the 1920s, 1950s and 1960s, together with gowns in more modern silhouettes that have hints of colors such as blush and lilac.

Michael Leyva worked his signature bridal magic with modern silhouettes that flatter the female form in his classic cuts and dramatic touches of volume, while the ever-ethereal Veluz Bridal creations dazzled on the runway with her gossamer touches.

Marriott Hotel Manila cluster director of communications Michelle Garcia shared that the Marry Me at Marriott’s seven years have already yielded so many happy brides and grooms.

“We are happy with the continued success of our annual wedding event and with it comes our promise to make each Marry Me at Marriott even more exciting each time, with more innovations to offer fresh ideas on how our guests can celebrate their milestone events with us,” Garcia said.

Read Next
Taking wise, vigilant steps to ward off ‘hungry ghost’
EDITORS' PICK
‘A greener, cleaner tomorrow’: A how-to guide for Filipinos who want to help with today’s energy crisis
China expands lockdowns to 25M people to halt viral outbreak
SM continues to send relief assistance to remote towns in Batangas
Get exciting deals and discounts when you download the new McDonald’s App
5-year-old Chinese boy in Cebu tests negative for novel coronavirus
DOH: Second person ‘under investigation’ for 2019-nCoV in Tacloban City
MOST READ
Dina Bonnevie on Coney Reyes: We have forgiven each other
Taal Volcano flexes signs of restiveness anew
172 Chinese tourists arrive in Bohol
PH to ‘start process’ of VFA termination — Locsin
Don't miss out on the latest news and information.