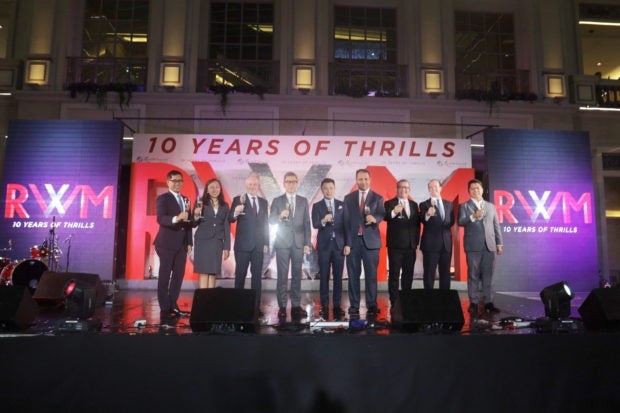 In 2009, Filipinos experienced a new kind of thrill as Resorts World Manila (RWM) introduced the new concept of integrated resorts in the country. This August, RWM marks its first decade milestone in the industry with a grand celebration across all its world-class segments.

To mark the occasion, RWM offers the best deals in hotel and dining with its 10th anniversary promos. Guests will surely enjoy the Grand Food Trip promo for only Php10,000 that whips up delectable buffets from RWM’s signature restaurants and partner hotels including The Terrace at Maxims Hotel, Silogue and Victoria Harbour Café at the RWM Garden Wing Gaming Area, Silk Road at the Grand Wing, Kusina by Hilton Manila, S Kitchen at Sheraton Hotel Manila, Marriott Café at Marriott Hotel Manila, Savoy Café at Savoy Hotel Manila, and Café Belmont at Belmont Hotel Manila.

Over at Garden Wing entertainment venue Bar 360, a special concert series will be featured for the month of August Dingdong Avanzado and the Doorbells on August 10, Richard Poon on August 17, Moonstar 88 on August 24, and Nyoy Volante on August 31.

Guests are in for more surprises during RWM’s anniversary month with a special announcement for RWM’s next big theater production after the success of Ang Huling El Bimbo.

“Resorts World Manila believes that we should always make the most out of life,” said RWM Director for Corporate Communications Joee Guilas”. That is why we at RWM continue to create world-class experiences with a Filipino touch and thrill the world every chance we get”. He added.

ADVERTISEMENT
Read Next
St Giles Makati Celebrates its 9th Anniversary
EDITORS' PICK
SM continues to send relief assistance to remote towns in Batangas
‘A greener, cleaner tomorrow’: A how-to guide for Filipinos who want to help with today’s energy crisis
China expands lockdowns to 25M people to halt viral outbreak
5-year-old Chinese boy in Cebu tests negative for novel coronavirus
DOH: Second person ‘under investigation’ for 2019-nCoV in Tacloban City
Get exciting deals and discounts when you download the new McDonald’s App
MOST READ
Dina Bonnevie on Coney Reyes: We have forgiven each other
172 Chinese tourists arrive in Bohol
Philippines orders 12 helicopters from Russia—Duterte
Duterte: China, Russia have respect for PH sovereignty
Don't miss out on the latest news and information.