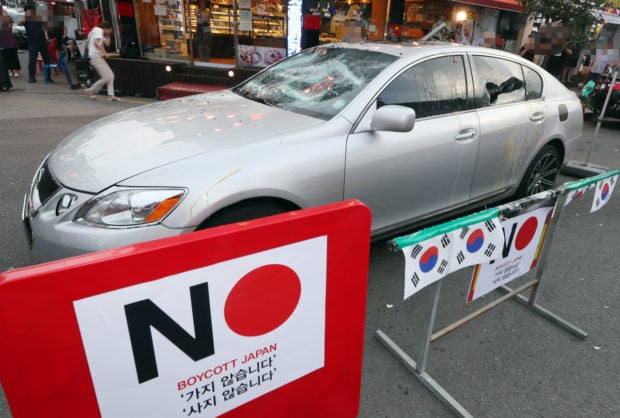 Yonhap via The Korea Herald

SEOUL — Sales of imported cars from Japan fell by double digits in July, amid an escalating trade feud between Korea and Japan and a subsequent Korean boycott of Japanese goods.

According to data released Monday by the Korea Automobile Importers & Distributors Association, the number of newly registered cars from Japanese carmakers dropped 17.2 percent to 2,674 units in July, down from 3,229 units registered the same time last year.

Compared with 3,946 units registered in June, the figure was also down 32.3 percent.

KAIDA spokesperson attributed the drop in demand for Japanese car brands to the boycott over trading curbs implemented by Japan against Korea.

Before the feud intensified between the neighboring countries, the KAIDA report in July showed that Japanese carmakers enjoyed a 17.0 percent increase in on-year car sales in June due to the surge in popularity of Japanese hybrid car models in South Korea.

However, just within a month, the Japanese share within South Korea’s foreign vehicles market dipped, from 20.4 percent in June to 13.7 percent in July, the report showed.

Meanwhile, the German portion of the market share rose to 62 percent from 59 percent a year earlier.

Within Japanese car brands, Lexus saw sales drop 24.6 percent on-month with 982 units sold, even though the figure was still a 32.5 percent increase from a year earlier.