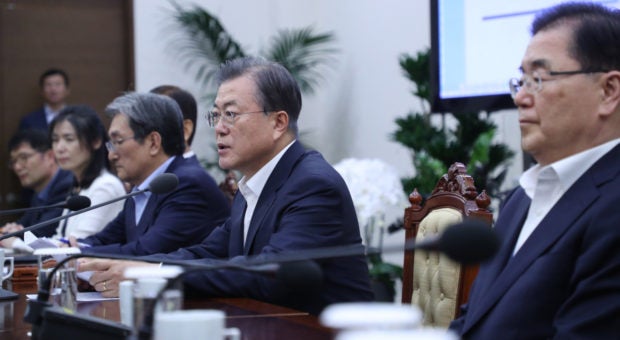 President Moon Jae-in speaks at the weekly meeting with senior aides on Monday. Yonhap via The Korea Herald

Speaking at a weekly meeting with senior aides, Moon said that the government must look beyond responding to Japan’s measures to laying the foundation for overtaking Japan’s economy, and highlighted the importance of what he called a “peace economy.”

“Extraordinary determination and bigger perspective to overtake the Japanese economy is needed,” Moon said, urging his aides to show the government’s determination in policies and in drawing up next year’s budget.

“Japan cannot block our economy’s leap. In contrast, (the measures) will be a stimulus that strengthens our determination to become an economic powerhouse,” Moon said.

Listing industrial developments, such as the commercialization of 5G technology, and policies such as the New Southern Policy and New North Policy that aim to diversify Korea’s export destinations, Moon said that stepping up innovative growth and expanding the scope of the Korean economy are “fundamental solutions” to the current situation.

Moon’s comments echo views that Japan’s decision to remove South Korea from its list of trusted trade partners and to apply tighter controls on exports of key semiconductor-related materials may have more fundamental objectives.

According to a high-level government official, Tokyo may be aiming to create uncertainties and instability within the Korean corporate community and the public, which would generate indirect costs to the country’s economy and add to economic difficulties.

At Monday’s meeting, Moon went on to highlight the importance of improving inter-Korean relations to achieve “peace economy” in overtaking Japan.

“If (a) peace economy is achieved through economic cooperation between the South and the North, we can catch up with the Japanese economy’s advantages in one leap,” Moon said, saying that the size of the domestic market is one of the key advantages Japan has over Korea.

“Japan must realize that (it) cannot take a leading role in the world based only on economic power.”

While Japan has cited a number of reasons, such as concerns over materials with military use flowing into North Korea through the South, for the trade measures, Seoul has accused Tokyo of using trade as a means of retaliation against the South Korean Supreme Court’s decisions on the forced labor issue.