The alarming truth about dengue

From Jan. 1 to July 13, this year, there had already been more than 130,000 reported dengue cases nationwide, with 561 deaths, or almost double than last year’s, according to the Department of Health (DOH). Close to 30,000 cases were children aged 5 to 9.

Many cities and provinces have been declared under state of calamity. The declaration allows the government to expedite the provision of more resources to stop the spread of dengue. A province under a state of calamity may expedite the release of funds for the purchase of blood supply, intravenous fluids, diagnostic kits and other medical supplies for patients. 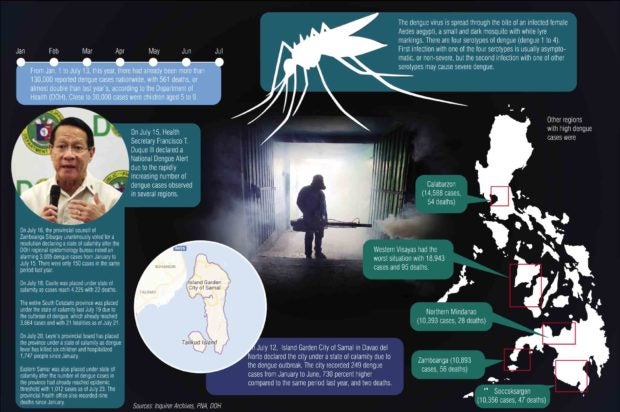 On July 12,  Island Garden City of Samal in Davao del Norte declared the city under a state of calamity due to the dengue outbreak. The city recorded 249 dengue cases from January to June, 730 percent higher compared to the same period last year, and two deaths.

On July 16, the provincial council of Zamboanga Sibugay unanimously voted for a resolution declaring a state of calamity after the DOH regional epidemiology bureau noted an alarming 3,005 dengue cases from January to July 15. There were only 150 cases in the same period last year.

On July 18, Cavite was placed under state of calamity as cases reach 4,225 with 22 deaths.

The entire South Cotabato province was placed under the state of calamity last July 19 due to the outbreak of dengue, which already reached 3,664 cases and with 21 fatalities as of July 21.

On July 20, Leyte’s provincial board has placed the province under a state of calamity as dengue fever has killed six children and hospitalized 1,747 people since January.

Eastern Samar was also placed under state of calamity after the number of dengue cases in the province had already reached epidemic threshold with 1,012 cases as of July 23. The provincial health office also recorded nine deaths since January.

On July 26, Iloilo City was placed under state of calamity due to dengue. There were 1,119 cases of dengue in the metropolis with nine deaths from January to July 20 this year. This is an increase of 462.3 percent compared to 199 cases with one death reported in 2018 during the same period.

On July 29, the Samar provincial government has approved a resolution placing the entire province under state of calamity due to the rising number of dengue fever cases in all of its 22 towns.