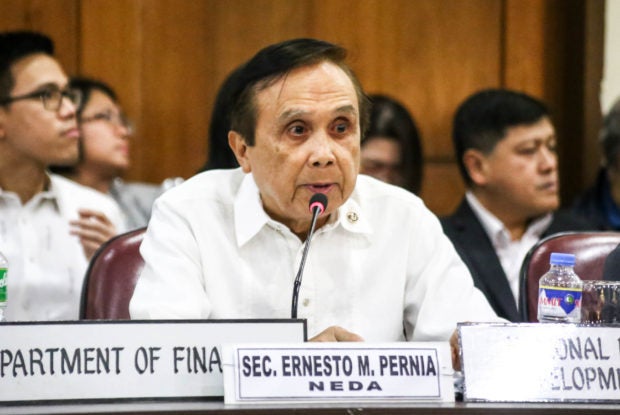 MANILA, Philippines — The Philippines’ bid to become an upper-middle-income country may have wait for one more year though it already leads in the Asia-Pacific region in achieving the United Nations’ (UN) Sustainable Development Goals (SDGs) by 2030.

“We may achieve that by next year because of the setback on our growth performance in the first quarter,” Socioeconomic Planning Secretary Ernesto M. Pernia said at a press conference on Wednesday. “It’s still possible that we may achieve upper-middle-income status this year, but I think it’s going to be surer next year.”

That was his answer to a question whether the Philippines could still cross the upper-middle-income threshold — defined by the World Bank as per capita income above $3,956 — this year.

Pernia also noted that the government had originally targeted to move up to that income level by 2020.

The growth setback Pernia is the 5.6% growth in the country’s gross domestic product (GDP) in the first quarter of this year — which is a four-year low. That’s also below the government’s downgraded full-year target range of 6-7%.

The drop was mainly due to underspending on public goods and services of P1 billion a day at the start of the year — no thanks to the delayed approval of the P3.7-trillion 2019 national budget.

According to the Socioeconomic Report 2018 of the National Economic and Development Authority (Neda), “the country is still one of the fastest-growing emerging economies in the region, despite the full-year GDP growth rate of 6.2% falling short of the 7-8 percent target.”

Last year, the annual GDP grew at its slowest pace in three years as inflation hit a 10-year high of 5.2% on the back of new or higher excise taxes slapped on consumption, skyrocketing global oil prices, and domestic food supply bottlenecks, especially of rice.

“Likewise, the per capita gross national income (GNI) growth rate slowed down from 4.9% in 2017 to 4.1% in 2018, falling short of the 5% target. Despite this setback, the country remains on track to reaching upper-middle-income status within the next two years,” Neda said in the report.

The Philippines was nonetheless being positioned as a leader as far as achieving the SDGs were considered, said Ola Almgren, the UN’s resident coordinator in the Philippines.

While the Asia-Pacific region was expected to miss all of the 17 SDGs, the Philippines was bucking the trend and reported progress on at least six goals during the High-Level Political Forum (HLPF) 2019 held in New York last week.

Following are the six goals that the Philippines has shown progress:

Pernia attributed the gains made thus far to the “interactive and complementary linked” implementation of the SDGs agenda with the Philippines’ own long-term vision dubbed “AmBisyon Natin 2040” and the Duterte administration’s medium-term socioeconomic blueprint under the Philippine Development Plan (PDP) 2017-2022.

PDP 2017-2022 was the first development plan anchored on AmBisyon Natin 2040, which was aimed at tripling the Philippines’ per capita income to $11,000 in 21 years by sustaining at least a 6.5% annual GDP growth alongside the implementation of policies that would make it a high-income country by 2040.

While the Philippines was unable to achieve most of the UN’s Millennium Development Goals (MDGs) in 2015, Pernia was confident that the country would “do better” in accomplishing the SDGs.

According to Pernia, the Philippines now has a better chance of achieving the SDGs on the back of the recent passage of a number of laws that will respond to the challenges of also achieving the goals under AmBisyon Natin 2040 and PDP 2017-2022.

These laws, which even decades back Congress had attempted to pass, are:

“In that fashion, we have better tools to do better vis-à-vis the SDGs,” Pernia said.