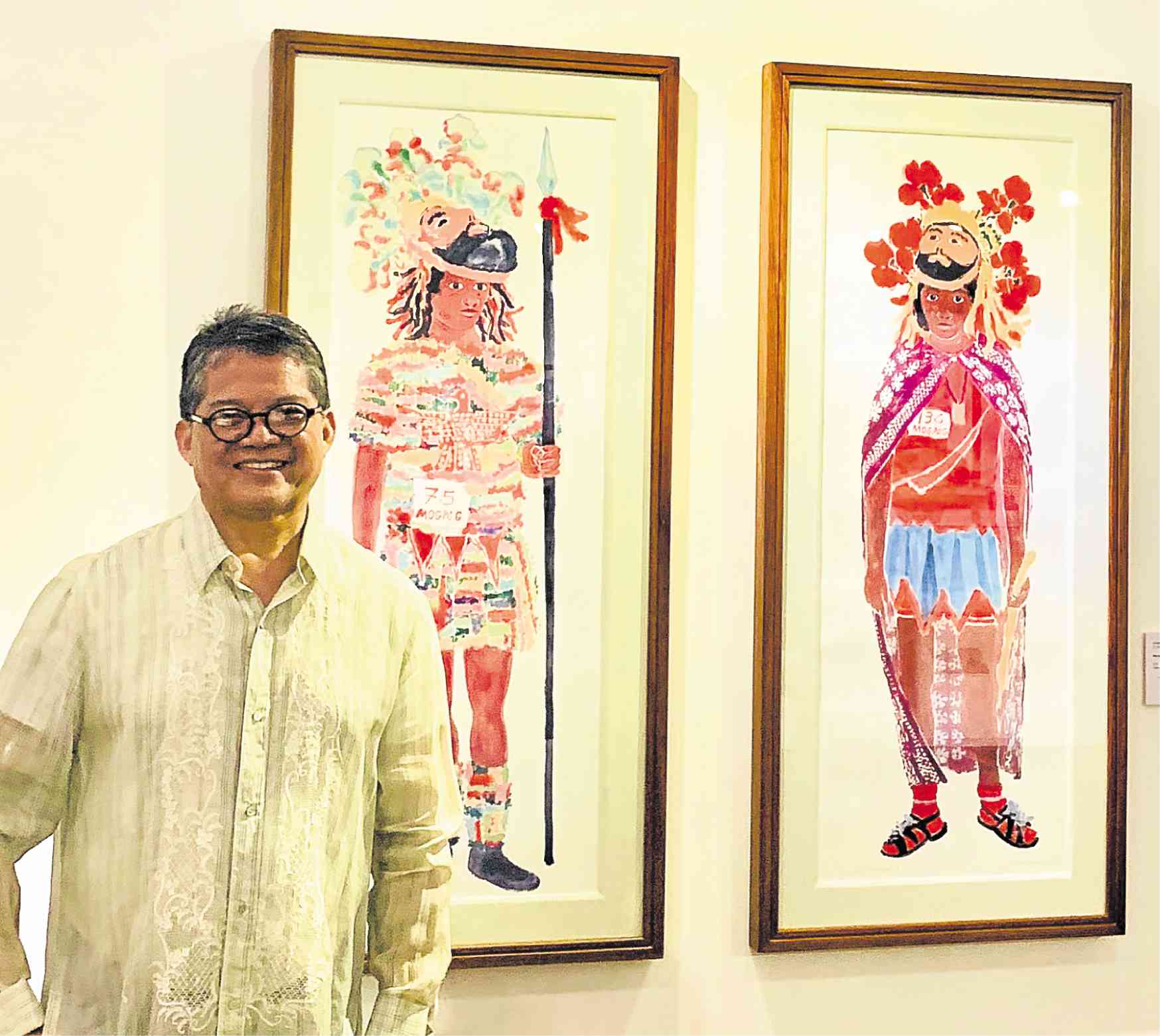 Claude Tayag never ceases to amaze. He not only dabbles but shines in the various endeavors he pours his heart and soul into—whether it be in the culinary arts or the visual arts.

We know him as a chef and culinary icon, with his relentless promotion of Pampango and Philippine cuisine.

If you have not yet been to his private dining space Bale Dutung, you better make your way to the Tayags’ home in Angeles, Pampanga (visit baledutung.com for details). It is by reservation only as guests experience the culinary traditions of the Pampangeños, as interpreted by Tayag, made extraordinary with the charming touch of his wife Maryann Quioc. You may opt for an all-Pampango menu or an all-lechon menu.

It was, in fact, at Tayag’s home that Anthony Bourdain experienced and fell in love with the best lechon in the Philippines. (To honor Bourdain, Bale Dutung now also offers an Anthony Bourdain menu.)

But the chef’s hat is only one of his many hats. Tayag was first recognized for his paintings, not for his cooking.

It was over 40 years ago, in 1977, that he was first acknowledged as a painter, when he bagged second prize at the annual competition of the Art Association of the Philippines, for an acrylic on canvas painting depicting the frenzied Ati-Atihan festival from an elevated view. A year later, in 1978, he made his official debut in the Manila art scene with a one-man exhibition of watercolor paintings at the ABC Galleries of Larry J. Cruz, son of the great Emilio “Abe” Aguilar Cruz, in Manila. The exhibit was well-received, with critics describing Tayag’s works as “characterized by a forceful spontaneity and raw vigor.”

They used to call Abe “Tatang Milio.” Tayag very clearly remembers when Abe invited his artist friends over to paint the landscape of the Zambales ranges (now Carmenville Subdivision). Tayag holds dear a photo taken by his father of that moment, in 1968, with the 12-year old prodigy  watching the painters intently.

It was quite a group: Sofronio “Sym” Mendoza, Romulo Galicano, Rodolfo Ragodon, Andres Cristobal Cruz, Mauro “Malang” Santos, and the future National Artist Vicente Manansala. Tayag remembers it was then that he found his own calling, thinking, “That’s what I want to be when I grow up!”

Tayag was also influenced by the “Dimasalang group” comprised of Cruz and three friends: Sym, Galicano and Andres Cristobal.

“It was their watercolor paintings that I tried to emulate, in terms of style and subject matter,” Tayag recalls.

In the decade following his first exhibit, Tayag was very prolific, holding an exhibit every two years, with each exhibit focusing on a different subject. Later, Tayag also became known as a sculptor. He started by designing and manufacturing traditional Filipino domestic furniture (e.g. lamesa, upuan, taburete, bangkô, paminggalan), which he consigned to the Pansol Pottery owned by potters Jon and Tessie Pettyjohn in Makati.

In 1990, he staged his first one-man exhibition as a sculptor at the Ayala Museum, presenting both functional and sculptural creations in wood. He awed audiences with his ability to “supersede the limitations of an essentially rigid material, achieving limitless volume and sensuous plasticity with this wave and curvilinear series.”

In the 1980s, Tayag started dabbling in cooking.

The ingenious Larry Cruz, then owner of Ang Hang restaurant in Makati, challenged Tayag to interpret his watercolor paintings as “edible art.”

I guess a Kapampangan does not back down from a challenge, especially one related to cooking, so Tayag executed a clever dinner entitled “Artworks” in 1989. So just as Larry had given Tayag his first exhibit in 1978, it was also Larry who gave Tayag his first culinary “exhibit” in 1989.

It must have been a hit since a few years later, in 1993, Tayag was featured as the guest chef of the hoity-toity Chaine des Rotisseurs at their annual dinner held at the Manila Hotel. He cooked traditional Pampango cuisine.

In 2001, he was invited to be guest chef for an entire month at the famous fine dining restaurant Prince Albert of the Intercontinental Hotel, the first Asian chef ever to be invited, cooking alongside their French chef Cyrille Soenen.

Since then, Tayag has become a favorite in the culinary scene.

But once an artist, you are always an artist. So when Dr. Ana Labrador, assistant director of the National Museum, saw Tayag at the Emilio “Abe” Aguilar Cruz Hall opening three years ago and suggested he hold an exhibition of his watercolor paintings with them, being a direct “offspring” of Abe as a watercolorist, he immediately said yes.

So until Sept. 22, the National Museum will present “Claude Tayag: Watercolors 1974-Present.”

Here you will see the other side of the chef: that of visual artist, featuring his watercolor paintings of T’boli women, paintings from the Moriones series, the Kristo series, the Cordillera series, paintings of churches and images of Catholic saints, postcards with art from his travels, and a throwback to the Bokuseki series.

Read Next
Gov’t to borrow record-high P1.4T in ’20
EDITORS' PICK
Sinovac jabs for gov’t execs? On ‘substitution basis’ only, says Duque
JC Cares Foundation extends support to bloodletting program
3 things you need to know about your laundry detergent
ING Pay is your new online payment partner — and more
PH embassy cautions Filipinos in US amid rising anti-Asian attacks
Duque willing to receive China-made Covid-19 vaccine, but…
MOST READ
PNP-PDEA gunfight: More questions than answers
Duque willing to receive China-made Covid-19 vaccine, but…
Persida’s folly
Algieri warns Garcia: If Pacquiao puts you down, you’re not getting up
Don't miss out on the latest news and information.