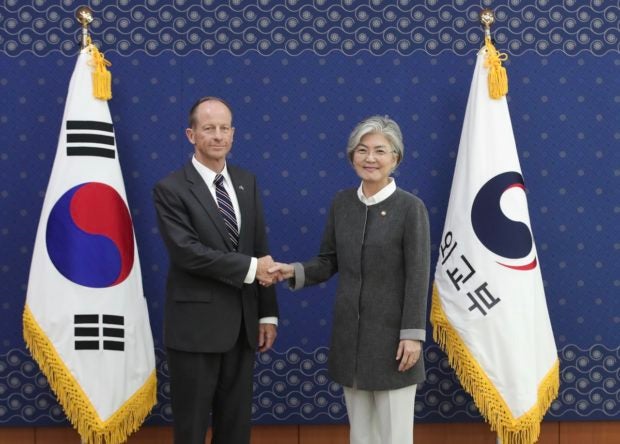 SEOUL — Japan’s recent decision to impose tighter restrictions on exports to South Korea of key materials for the semiconductors and display industries will take a toll on the global tech industry, Seoul’s government official said Wednesday.

“It will adversely affect companies ranging from Apple, Amazon and Dell to Sony and billions of consumers all over the world,” he told foreign reporters based in Seoul on the condition of anonymity.

The trade measure, which was taken by Tokyo on July 4 without prior notice, is “inconsistent” with the World Trade Organization principles, he said.

Tokyo’s decision to target the chipmaking sector, which accounts for some 25 percent of South Korea’s exports, was disappointing in particular, raising concerns over using science and technology as tools for a trade war. “It will only lead to tragic consequences,” he said.

South Korea is becoming increasingly estranged from Japan after the neighboring country imposed restrictions on exports of key items used by its semiconductors companies like Samsung Electronics, the world’s largest maker of memory chips, and its smaller rival SK hynix. The measure was taken in apparent protest of the Seoul top court’s decision on wartime forced labor.

With no signs of a thaw of their relations, South Korea called for US mediation to reverse Tokyo’s export restrictions while preparing to raise the issue at a WTO meeting, slated for earlier next month.

On Wednesday, David Stilwell, the US assistant secretary of state for East Asian and Pacific affairs, vowed to support South Korea and Japan to resolve the dispute, stressing the importance of the two US allies’ cooperation in tackling regional issues.

“Fundamentally, the ROK and Japan must resolve these sensitive matters, and we hope that resolution happens soon,” he told reporters at the Foreign Ministry’s headquarters in central Seoul, referring to South Korea’s official name as the Republic of Korea.

With its priority placed on strengthening relations between itself and the two close allies, he said the US will “do what it can to support their efforts to resolve.”

Stilwell, on his first visit to Seoul since taking office in June, held a series of meeting with South Korean officials, including Foreign Minister Kang Kyung-hwa and Kim Hyun-chong, deputy director of the presidential National Security Office.

After a 40-minute meeting with Stilwell, Kim said he conveyed Seoul’s stance and preferred way of resolving the feud with Tokyo.

In a separate meeting, the foreign minister voiced her expectation for Stilwell’s role as a “bridge and communication channel” between the allies.