BEIJING – China’s economic growth sank to its lowest level in at least 26 years in the quarter ending in June, adding to pressure on Chinese leaders as they fight a tariff war with Washington. 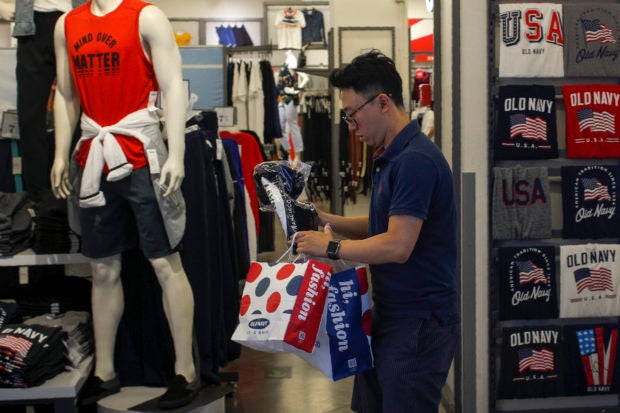 A man buys clothes from an American clothing store having a promotion sale at a shopping mall in Beijing, Monday, July 15, 2019. China’s economic growth sank to its lowest level in at least 26 years in the quarter ending in June, adding to pressure on Chinese leaders as they fight a tariff war with Washington. (AP Photo/Andy Wong)

The world’s second-largest economy grew 6.2% over a year ago, down from the previous quarter’s 6.4%, government data showed Monday.

Hopes for an early growth rebound faded after President Donald Trump raised tariffs on Chinese imports in May to turn up pressure on Beijing over the aggressive tactics it’s using to challenge American technological dominance. Now, economists say the slowdown might extend into next year.

The proportion of South African output going to China, for instance, has shot up from 2% in the mid-2000s to 15% now, according to a study by the McKinsey Global Institute.

Then there’s the Democratic Republic of the Congo, which sends 45% of its exports to China, according to United Nations data cited in the McKinsey report.

Among major economies, Australia sent 35% of its exports to China in April, Brazil 30% and South Korea 24%, according to the Peterson Institute for International Economics.

Besides hurting countries that export raw materials to Beijing, the Chinese slowdown could come back to squeeze American companies like Procter & Gamble and General Motors that sell into the vast Chinese consumer market.

“President Trump is probably happy that he’s starting to tank the Chinese economy,” Lovely said. “But it’s a case of ‘be careful what you wish for.’ ”

But the world faces other problems, too.  For one thing, Trump’s tariffs on imports from a host of countries — and the retaliation they have drawn from America’s trading partners — are crimping world trade and investment.

Manufacturers worldwide are also sitting on unsold stockpiles of goods, and growth will likely slow as they pare their inventories, Johnson said.

Trump and President Xi Jinping agreed last month to resume negotiations in a fight that has battered both American and Chinese exporters. But economists warn their truce is fragile because they still face the same array of disputes that caused talks to break down in May.

“The trade war is having a huge impact on the Chinese economy,” Edward Moya of OANDA said in a report. “As trade negotiations struggle for meaningful progress, we are probably not near the bottom for China’s economy.”

Chinese leaders have stepped up spending and bank lending to keep growth within this year’s official target range of 6% to 6.5% and avert politically dangerous job losses. But they face an avalanche of unexpectedly bad news including plunging auto sales. /gsg