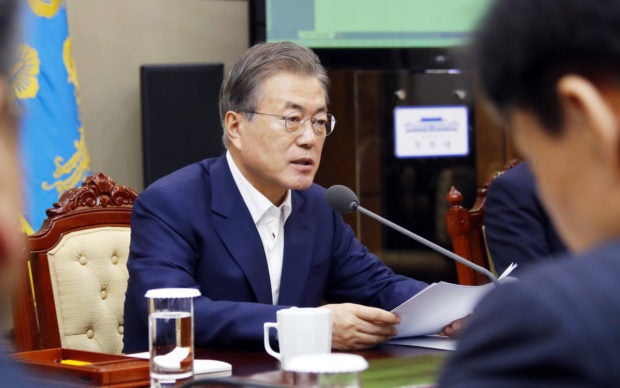 President Moon Jae-in speaks at the weekly meeting with senior aides on Monday. Yonhap via The Korea Herald

SEOUL — President Moon Jae-in on Monday urged Japan again to reconsider its trade curbs, saying that linking historical and economic issues was a “very unwise move” and that Japan would ultimately be hit harder than Korea.

“Japan’s unprecedented action of linking historical issues to economic issues is a very unwise measure that goes against the history of improving bilateral relations,” Moon said at a weekly meeting with his aides.

He added that the two countries had until now kept historical issues separate from those concerning the economy, national security and culture.

Tokyo’s decision to remove South Korea from a list of countries receiving preferential treatment in importing key industrial materials form Japan has been interpreted as retaliation against the Supreme Court’s decision on Korean victims of forced labor during Japan’s occupation of the peninsula in the first half of the 20th century.

Due to the measures, exporting industrial materials such as fluorinated polyimides to South Korea now requires the Japanese government’s approval. Local semiconductor makers are expected to be hit hardest by the measures, as South Korean firms are almost entirely dependent on Japanese imports.

Saying that Japan has ignored Seoul’s proposed solution to the matter — which his government is open to negotiating with Japan — Moon urged Tokyo to seek a diplomatic solution.

“The Japanese government has taken measures unilaterally without any diplomatic negotiations or efforts,” Moon said, adding that Japan should withdraw the measures.

The South Korean Supreme Court’s rulings siding with the victims of forced labor has met with protests from Japan. Seoul has maintained its position that the government cannot interfere with the judiciary.

Moon also took issue with Tokyo’s claims that its trade measures had been prompted by the possibility of South Korea failing to enforce sanctions on North Korea.

“This is a grave challenge against our government that not only executes international trade restrictions in an exemplary manner but upholds UN Security Council resolutions, while doing all we can to improve inter-Korean relations and to establish peace on the Korean Peninsula within this frame,” Moon said.

“If Japan had such suspicions, (Japan) should have raised the issue with South Korea first or with an international monitoring body, but (it) instead raised the allegations without saying anything beforehand.”

Since rolling out the trade measures, high-ranking Japanese officials have hinted that Japan-made materials that could be used for weapons production had leaked into North Korea via the South.

Seoul immediately hit back, suggesting that both South Korea and Japan be reviewed by an international body to determine whether such leaks related to sanctions on North Korea have occurred.

At the meeting, Moon hinted that Japan’s move could have ulterior motives, saying that the measures target South Korea’s semiconductor industry.

“This is tantamount to blocking our economy’s growth at a time when (the Korean) economy is seeking a higher level of growth. If Japan’s motives are in this, then it will not succeed,” Moon said.

Moon added that South Korea has overcome obstacles in the past and that the country should localize the production of materials and equipment and diversify overseas sources.

“I warn that in the end, the bigger damage will be dealt to the Japanese economy,” Moon said.

He said the government will spare no effort to support local firms in handling the situation and to reform the structure of the country’s economy.