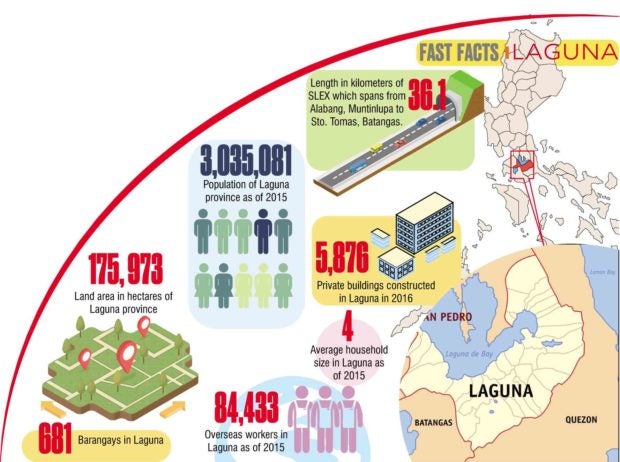 Located near the country’s largest inland body of water is the province of Laguna. Its name was influenced by Laguna de Bay which is Spanish for “Lake of Bay.” Originally, the Spaniards called the province “La Provincia de Laguna de Bay.”

This thriving province is part of the Calabarzon region and is situated southeast of Metro Manila. With a total land area of 175,973 ha, it consists of 24 municipalities and six cities. Its capital is the municipality of Santa Cruz.

The proximity of Laguna to Metro Manila (about 30 kilometers) and the abundance of natural and agricultural resources of the province attract business investors. Connected to the metropolis by the modernized South Luzon Expressway (SLEx), the province is less than an hour drive from Ninoy Aquino International Airport and the country’s business districts in Makati City and Bonifacio Global City.

SLEx, which currently spans 36.1 km from Alabang, Muntinlupa to Sto. Tomas, Batangas, is one of the three major expressways that links Metro Manila to the key southern regions of the Philippines, including Calabarzon. It connects with the Skyway System and the Southern Tagalog Arterial Road (STAR) and is a key logistical backbone to the southern corridor of Metro Manila.

People going to and from Laguna, whether for business or pleasure will further benefit from big-ticket infrastructure projects in the province. One of these projects is the Cavite-Laguna Expressway (CALAx).

CALAx is seen to improve travel time from Cavite Expressway (CAVITEx) to SLEx to a mere 45 minutes from the usual 1.5 hours. In June 2017, groundbreaking rites were held for the construction of the 18-kilometer Laguna section of the expressway.

One city that has received an economic boost from the construction of the SLEx is Sta. Rosa. Once a town highly-dependent on agriculture and family-owned enterprises for livelihood, Sta. Rosa City now holds the status of a major residential, commercial and industrial center in the southern Luzon region.

The opening of SLEx in the late 1970s ushered the transformation of Sta. Rosa from a slow-paced, rustic town to a haven for investments both local and foreign.

Sta. Rosa was established as a separate municipality from its neighboring town, Biñan (now also a city) in 1972 and was converted into a city in 2004. The city entered the so-called Billionaire’s Club when it breached the P1-billion-mark in terms of revenue in 2007, mostly coming from business and realty taxes.

With the development in the late 1980s of the Laguna Technopark, the country’s first privately-owned industrial estate, Sta. Rosa was deemed the “gateway” to the Calabarzon. The city was also regarded as the Philippines’ motor city after housing major car manufacturing and assembler companies.

First class communities are meanwhile found in the city and one of these prime developments is Nuvali, which has redefined the estate management trend in the country with its top-of-the-line innovations and breakthrough green technologies and programs.

Launched in 2009, the 2,290-ha mixed-use development that straddles the cities of Sta. Rosa, Cabuyao and Calamba in Laguna is regarded as an “eco-city” built on the principles of sustainable design.

With a robust workforce and a favorable business climate, industries such as tourism, footwear, wood carving and food manufacturing continue to flourish in Laguna, which has since evolved into a modern agro-industrial economy.

Footwear production is a main source of livelihood for the people in municipality of Liliw, known to be “Land of Footwear” while wood carving is an income-generating activity in the town of Paete, which was declared the country’s wood carving capital in 2005.

Laguna is famous as well for its native delicacies such as buco pies, espasol, uraro cookies, and the famous kesong puti (white cheese), salted eggs, kinulob na itik (roasted duck), and halayang ube, among others.

Tourism is always dynamic in the province, which is nestled in the foothills of three mountains namely, Mount Makiling, Mount Banahaw and the Sierra Madre Range. The famous Pagsanjan Falls, because of the “shooting the rapids” that thrill the tourists, and the hot spring resorts and the University of the Philippines campus in Los Baños are also staple destinations in Laguna.

Laguna also boasts of its rich cultural heritage. One of its notable towns is Calamba, the birthplace of national hero Jose P. Rizal who inspired Filipinos to fight for independence during the Spanish regime. With reports from Zathea Kate L. Dela Pena and Andrea Rose D. Gregorio, Inquirer Interns

Read Next
On the purging of Manila
EDITORS' PICK
Been there, done that but what’s the difference between MECQ and GCQ?
BREAKING: 3,226 latest COVID-19 cases bring PH’s total to 106,330
A gem of a residence in the new normal
Water remains our saving grace right now
PNP: Checkpoints back in MECQ areas
Smart 5G goes live
MOST READ
MECQ guidelines in infographics
MECQ in NCR, other areas: Mass transportation suspended, quarantine pass required anew
Want higher pay? Join the police force, Duterte tells nurses
Lacson takes up cudgels for health workers ‘threatened’ by Duterte
Don't miss out on the latest news and information.