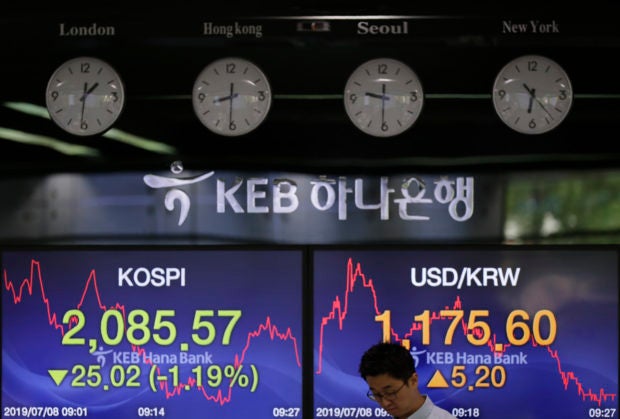 Fed leaders have said they are ready to cut rates to support economic growth amid a tariff war with Beijing.

But investors questioned whether the Fed might think that is needed after Friday’s data on June job creation.

Those data “have many questioning whether we will see just two rate cuts in 2019 and not what some call the required three” to push U.S. stocks higher, said Edward Moya of OANDA in a report.

Trade data due out this week from several countries and Fed chairman Jerome Powell’s testimony to Congress on Wednesday “will likely highlight the effects of the trade war and should support the calls for additional stimulus globally,” said Moya.

Wall Street fell Friday after the Labor Department said employers added 224,000 jobs in June. That was better than forecast and a rebound from May’s disappointing weaker-than-expected job creation.

The Fed holds its next policymaking meeting at the end of the month. The panel will reveal whether it has decided to cut rates for the first time since the Great Recession in 2008 in the face of slowing economic momentum around the world.

Last year, Fed officials raised rates four times, in part to stave off the risk of high inflation and in part to try to ensure that they would have room to cut rates if the economy stumbled.

On Friday, the Fed emphasized it would act as necessary to sustain the economic expansion, while noting most Fed officials have lowered their expectations for the course of rates. The Fed’s statement came in its semiannual report on monetary policy.

ENERGY: Benchmark U.S. crude lost 7 cents to $57.58 per barrel in electronic trading on the New York Mercantile Exchange. The contract advanced 17 cents on Friday to close at $57.51. Brent crude, used to price international oils, shed 5 cent to $64.28. It rose 93 cents the previous session to $64.23.