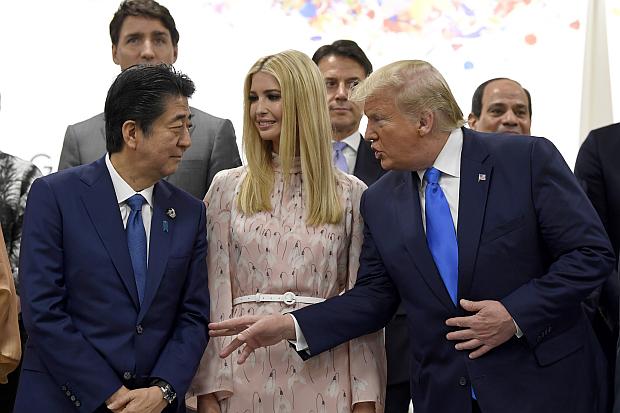 OSAKA, Japan — The Group of 20 summit in Osaka ended Saturday with lofty language from powerful world leaders, but it was eclipsed by U.S. President Donald Trump, who agreed to restart trade talks with China and extended a surprise invitation for North Korea’s leader to meet him Sunday.

Despite the focus on Trump, the summit’s host, Japanese Prime Minister Shinzo Abe, declared the gathering a success.

“The G-20 nations, as the countries that lead the world economy, have a responsibility to squarely face global problems and to come up with solutions through frank dialogue,” Abe said in concluding the meeting.

“Now, with this ’Osaka Declaration,’ we should try to tenaciously find, not the differences, but common ground among us, and, we hope, to continue our effort to sustain global economic growth,” he said.

In striving for common ground, however, the summit declaration finessed differences and yielded no major new initiatives.

Still, German Chancellor Angela Merkel welcomed the fact that the leaders managed to hold the line on the issue of climate change, with 19 countries committing themselves to the Paris climate accord.

Only the United States dissented, reiterating Trump’s decision to withdraw from the Paris Agreement “because it disadvantages American workers and taxpayers.”

Merkel told reporters that “this process cannot be turned around.” She said some leaders in Osaka indicated they were willing to up commitments to curb greenhouse gases by aiming for “net zero” emissions by 2050.

Merkel also lauded the deal between the EU and the Latin American bloc MERCOSUR — also struck on the G-20 sidelines — to create the world’s largest free trade zone after 20 years of negotiations. The agreement includes a reference to the goals of the Paris accord.

Japan had pushed for the Osaka summit to become a landmark for progress on environmental issues, including tackling the global problem of plastic waste and recommitting to efforts to counter climate change.

Leaders said they’d “look into a wide range of clean technologies and approaches, including smart cities, ecosystem, and community-based approaches.”

The G-20 leaders have long sought to present a united front in promoting open markets and calling for smart policies to fend off threats to global economic growth. But the schisms over such issues as protectionism and migration are straining efforts to forge the usual consensus on a broad array of policy approaches and geopolitical issues.

The summit declaration did not take aim at protectionism but included a call for free, fair, non-discriminatory and open markets.

Much of the spotlight of the two-day meeting focused on Trump.

Using Twitter, he raised a stir by inviting North Korea’s Kim Jong Un to shake hands during a visit he plans to make to the heavily armed Demilitarized Zone between the Koreas on Sunday. “If Chairman Kim of North Korea sees this, I would meet him at the Border/DMZ just to shake his hand and say Hello(?)!”

North Korea’s First Vice Foreign Minister Choe Son Hui responded by saying it was a “very interesting suggestion,” and the meeting, if realized, would serve as “another meaningful occasion in further deepening the personal relations between the two leaders and advancing the bilateral relations.”

She said North Korea still hadn’t received an official proposal for the meeting from the United States.

Trump has at times found himself at odds with other leaders in such international events. China, meanwhile, has sought support for defending global trade agreements against Trump’s “America First” stance in gatherings like the G-20.

At the outset of their meeting, Trump told Xi he wants to “even it up in respect to trade,” and that he thought it would be very easy to do.

The two sides have levied billions of dollars’ worth of tariffs on each other’s products, and talks on resolving the longstanding issues had stalled in May.

Afterward, Trump said the talks were “back on track.” He said he had decided to hold off on imposing more tariffs on Chinese exports, while China planned to buy more American farm products.

China’s official Xinhua News Agency said Xi and Trump had agreed to restart trade talks “on the basis of equality and mutual respect.”

It’s unclear, however, if they have overcome the obstacles that brought the talks to a halt earlier.

Holding the summit in Osaka allowed Abe to perhaps raise his popularity among constituents in this manufacturing hub ahead of an election for the upper house of parliament in July. Abe’s ruling Liberal Democratic Party has suffered several setbacks in by-elections and his long tenure as prime minister is raising questions about who will succeed him.

While he upstaged his host, Trump did make a point of attending meetings like one early Saturday on women’s empowerment, where his daughter and adviser Ivanka Trump spoke.

She and others noted that the world economy would get a boost of up to $28 trillion by 2025 if women were on an equal economic footing and described improving the status of women as “smart economic and defense policy.”