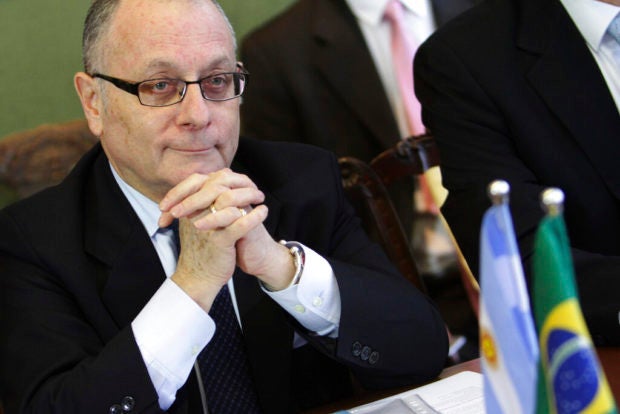 The agreement announced by both sides came as trade talks between the EU and the United States have stalled with the Trump administration threatening to impose tariffs on all autos, a major European export to the U.S.

“In the midst of international trade tensions, we are sending today a strong signal with our Mercosur partners that we stand for rules-based trade,” European Commission President Jean-Claude Juncker said following the clinching of the deal in the Belgian capital of Brussels.

Juncker described the pact with the bloc made up of Argentina, Brazil, Paraguay and Uruguay as “an historic moment” that came 20 years after talks were launched. It shows the European bloc is determined to remain a flag-bearer of the global trade system at a time when it is being challenged by a Trump administration skeptical of free trade.

Argentina’s Foreign Ministry said the agreement “will mean the integration of a market of some 800 million people, nearly a fourth of the world’s gross domestic product and more than $100 billion in bilateral trade of goods and services.”

The ministry said the deal also is aimed at strengthening political and cultural ties with the EU, improving access to goods, services and investments by reducing restrictions and easing access to technology and raw materials.

Juncker said the deal would remove most tariffs on EU exports to Mercosur, saving more than 4 billion euros ($4.5 billion) worth of duties each year, four times as much as Europe’s pact with Japan.

The commission, which negotiates trade deals on behalf of the 28-nation EU, said the agreement is particularly important for industrial sectors like cars and car parts, machinery, chemicals, pharmaceuticals as well as clothing and footwear. Mercosur hopes to benefit with more exports of agricultural products including beef, poultry and sugar.

“The basics of this deal have been quite clear for some time. It’s cars and machinery and agriculture. But in the past, politics have stood in the way. Particularly in Brazil, which has had a very protectionist policy focusing on domestic production,” said Jacob Funk Kirkegaard, senior fellow, at the Peterson Institute for international economics. “And at the same time, the Europeans have been very protective of their agricultural sector.”

The commission said the deal, which still must be ratified by the legislatures of all the countries involved, will also ease border checks and cut red tape.

The agreement brings to 15 the number of pacts the EU has concluded since 2014, most recently with Canada and Japan, and comes as the bloc pushes ahead with international trade deals.

Brazilian President Jair Bolsonaro called it one “of the most important trade agreements of all times.”

The Brazilian government said the deal would boost Latin America’s largest economy by slashing tariffs for some agricultural products like orange juice, fruit and instant coffee, and expanding access via quotas for beef, ethanol and sugar.

“Brazilian companies will benefit from the elimination of tariffs on exports of 100 percent of industrial products. That will equalize the conditions of competition with other partners that already have free trade agreements with the EU,” it said.

The deal is “a game changer in Latin America as a whole, which historically has been very protectionist,” Kirkegaard said. “This could herald in a new era for Mercosur.”

Negotiations began on June 28, 1999, but have taken a long, torturous path marked by breaks and frustrations, as the countries’ different sensitivities and priorities were taken into account.

But EU Trade Commissioner Cecilia Malmstrom said the talks gathered momentum early this year, aided in part by a new Brazilian government that made the deal one of its priorities, and were pushed over the line by intensive negotiations over the last three days in Brussels.

“This is a landmark agreement,” Malmstrom told reporters in Brussels, flanked by negotiators and senior officials.

“With this deal we are showing that we believe that trade is a good thing. It brings people and companies together, and we send a loud and clear message in support of open, sustainable, mutually beneficial, rule-based trade.”