According to Chinese philosopher Lao Tzu, “The journey of a thousand miles begins with a single footstep.”

All growth springs from the beginning. Major historical changes didn’t occur overnight—they happened in gradual stages, through slow, protracted movements. The same applies in the world of business. It is said that the great entrepreneurs are the daring ones, the constantly-changing movers—those who, despite humble beginnings, persisted with grit, drive and guts, who trusted their inner voice against doubt, who believed in their vision and strived to be better, and who decided to take a step, which made all the difference.

Such are the stories of these eight individuals, all of them successful Filipino entrepreneurs. Equally visionary founders, these men and women followed a similar path: they started small, took risks, and eventually expanded their businesses. 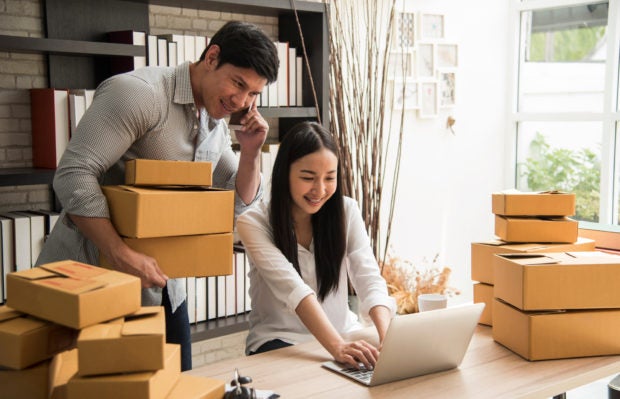 Socorro Ramos entered the publishing and retail industry by working as a salesgirl at a bookstore. At the age of 19, she opened National Book Store in Escolta with her husband with a capital of P200, selling books and school supplies to students. At that time, Manila was under the control of the Japanese, who imposed censorship on books and periodicals. To augment their earnings, she and her husband resorted to selling other items like candles and soaps.

After the post-war boom proved profitable for the company, ushering in bigger revenues, the Ramoses opened a nine-story building along Avenida. At 95, she still believes in the time-honored tradition of “hands-on approach” in business. She even designed the company’s logo herself.

Tony Tan Caktiong used to operate an ice cream parlor, before converting it into a fast food restaurant called Jollibee. With a starting capital of P350,000, the young Caktiong opened two branches in Cubao and Quiapo, together with friends who supported his idea.

Caktiong decided to serve hamburgers, fried chicken, and spaghetti to customers when they started looking beyond the usual ice cream. Eventually, the business grew, and he had to hire more employees. By knowing the Filipino market, Jollibee managed to excel as a fast food powerhouse.

Hailing from Iloilo City, Edgar Sia dropped out of college to pursue his own laundry and photo-developing business at the age of 19. In 2003, 26-year old Sia decided to open the barbecue fast food restaurant Mang Inasal—Ilonggo for “Mr. Barbecue.” The first branch was built at a mall parking lot in his home city.

The restaurant took off. When Tony Caktiong heard about Sia’s burgeoning business, he decided to buy Mang Inasal for a total of P5 billion. Sia eventually put the sales of Mang Inasal to other investments like banking and healthcare. At 42, he’s considered the country’s youngest billionaire.

In 1971, Cresida Tueres started Greenwich as a small over-the-counter pizza store in Greenhills. Tueres had a knack for cooking. Her friends loved the food she served so much that they decided to buy their own Greenwich franchise.

Impressed with Tueres’s business acumen and the growth of Greenwich, Jollibee Foods Corporation obtained a deal in 1994 to acquire 80% of Greenwich’s shareholding. Since then, the pizza parlor branched out to include other dishes in its menu. In 1997, Greenwich had a record sale of P1 billion.

With only two cake displays and ten employees, Milagros, Clarita, and Doris Leelin started Goldilocks at a 70-sq-m building space in Makati. Sisters Milagros and Clarita loved baking and decided to pursue their passion into business. With the help of their sister-in-law Doris, the Leelins opened their first branch.

In 1991, Goldilocks launched its franchising program. As of 2015, the bakeshop chain had almost 400 stores across the country, with other branches in the USA, Canada, and Southeast Asia. From a modest capital of P66,000, Goldilocks is now a multi-million food enterprise with more than 4,000 employees.

The young Magsaysay left school to bust tables, wash plates, and work on the cash register at a fast food chain. In a few years, he became a manager, handling five stores.

With his background and skills in store management, Magsaysay’s friends asked him to handle Potato Corner, of which he was a co-founder. They pooled their money together and started the food cart business in 1992, offering franchises left and right. Today, Potato Corner has more than 550 stalls in the Philippines and around the world.

In the 1930s, Asiang Reyes started The Aristocrat as a mobile canteen in Luneta, serving sandwiches filled with adobo and other Filipino viands. Hotdog trucks were in vogue at that time. Reyes created her own version of merienda for park-goers.

Reyes was supposed to name the canteen “Andy” after her eldest son, but changed it to Aristocrat instead. The canteen prospered, and Reyes and her husband decided to turn it into a full-time restaurant.

Using the recipes they learned from a Chinese chef and a capital of P30,000, Araceli and Jun Manas started Hen Lin in 1983. Jun worked for an insurance firm while his wife Araceli worked in a bank. The couple had to learn the intricacies of the business themselves. At night, they practiced making siomai or dumplings.

The Manas couple opened the first Hen Lin store in SM Makati, which was well received for its delicious dim sum offerings. 30 years on, Hen Lin is popular in many malls, offering various products such as hopia, noodles, congee, rice toppings, and breakfast food.

Whether you’re a small or medium-sized entrepreneur whose goal is to amplify your business, BDO SME Loan can be your reliable financing partner. Avail of financing options with your specific business need in mind – purchase new equipment, add inventory or expand your office space and more.

Apply for a BDO SME Loan now, and take your business to new heights.