Using world-class technologies, OceanaGold (Philippines), Inc. group of Foresters continually puts forward the Company’s reforestation and rehabilitation projects. The mine has already planted more than 1.6 million trees in its rehabilitation areas within the Didipio Mine including reforestation plantations in the provinces of Nueva Vizcaya and Quirino. The reforestation survival rate is an impressive 92%, above the Philippine national standard of 80%.

The Didipio Mine’s Environment Team utilizes macrosomatic clonal propagation to produce various species of trees faster and more efficient than conventional planting. It produces approximately 500,000 seedlings in a year hence the Company’s partnership with different organizations and individuals in tree planting activities. Through the Mining Forest Program, OceanaGold has reforested a total area of more than 1,258 hectares in Nueva Vizcaya and Quirino.

Most seedlings produced in the mine’s nursery include endemic species such as Narra, Tuai, Mayapis, Tanguile, yakal, Guijo, Kalantas, Kupang, Agoo, Balete, and Alnus. It also produces exotic trees like Mahogany, Gmelina, and Manguim. Local farmers are capacitated in order to practice mass propagation of seedling through macrosomatic clonal propagation even in their own farms.

Furthermore, the Company progressively rehabilitates areas that are no longer needed in its mining activities. OceanaGold has progressively rehabilitated 94.62% of the Didipio Mine. Rehabilitation includes adding top soil to rock face walls within the mine, planting of grasses, and installing coconut nets to avoid erosion. Vertiver grasses are usually planted as its roots can grow to one meter thereby providing better slope stabilization.

To fast-track its progressive rehabilitation, hydro-seeding technology is applied wherein seeds, soil, and organic fertilizer are mixed and sprayed on rock face walls. It only takes a few weeks before grasses grow and the area eventually becomes nutrient-sufficient for trees. Progressive rehabilitation is aligned with the Company’s effort to sustain the rich biodiversity in Didipio.

Even prior to the commencement of its operation in 2013, the Company has established reforestation areas in Didipio during its exploration phase. These areas are now rich forests that are home to numerous species. OceanaGold commits to continuously support the government’s National Greening Program (NGP) and progressively rehabilitate more areas to minimize its environmental footprint. 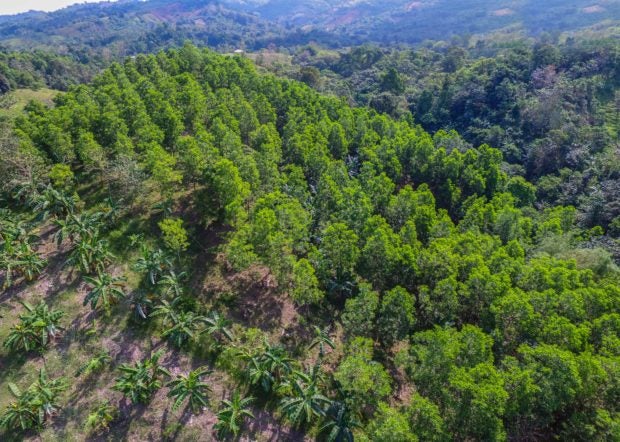