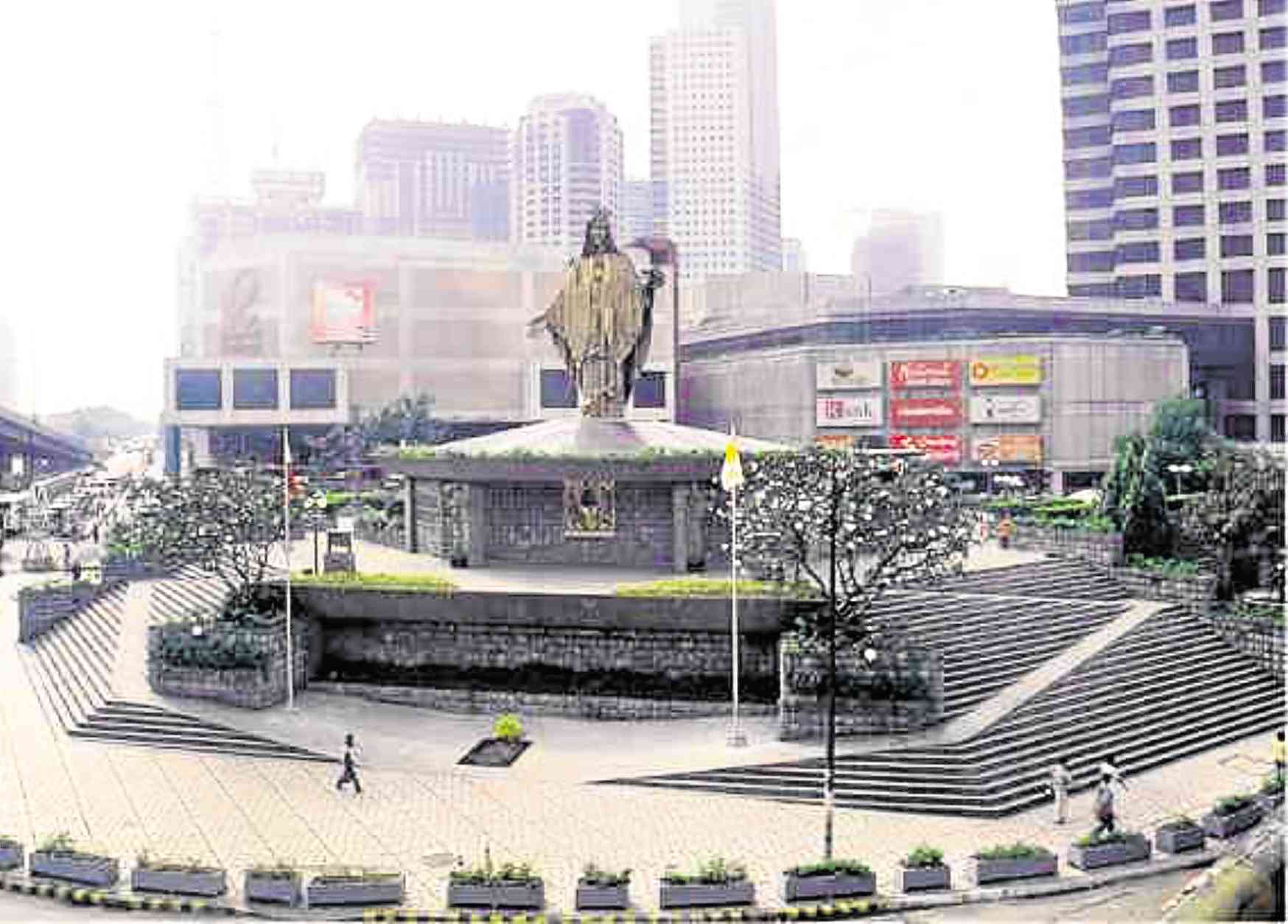 Independence Day celebrates the birth of a new nation where people, freed from foreign or local rulers and dictators, attain the freedom to make their own history. Memorials have been built across the world to commemorate freedom and independence—to honor, to remember and never forget the struggle for freedom and those who sacrificed and died to make it possible. Popular forms of memorials include buildings, statues, sculptures, arches and parks.

After the late dictator Ferdinand Marcos and his family were forced into exile in Hawaii in 1986, a shrine along Epifanio delos Santos Avenue, more known now as Edsa, was commissioned to mark the historic peaceful uprising that toppled Marcos’ two-decade regime.

The memorial of the People Power Revolution in 1986 was formally consecrated on Dec. 15, 1989, just days after a bloody coup. Formally known as the Shrine of Mary, Queen of Peace, it sits at the crossroads of Edsa and Ortigas Avenue in Quezon City.

The shrine was a brainchild of the late Manila Archbishop Jaime Cardinal Sin, who convinced the families of Paquito Ortigas and John Gokongwei to donate the lot. Arch. Francisco Mañosa, a proponent of vernacular Filipino architecture, designed the church with preparatory work from National Artist Leandro Locsin and Arch. William Coscolluela.

Mañosa’s vision for the shrine was a “People’s Basilica” designed like a “bahay kubo” (thatched hut) but on a grander scale—with seven pitched roofs that framed a statue of the Blessed Virgin Mary. The original design was rejected because a committee member wanted a Spanish design for the church. But Mañosa was against the idea of building a Spanish colonial church commemorating a Philippine revolution.

The final design was a “People’s Pavilion,” a promenade with the bronze statue of the Blessed Virgin Mary at the center, created by Virginia Ty-Navarro, and an underground church filled with artwork by Filipino artists. Natural light comes in from all sides, except the main altar wall, which draws light from the skylight.

The skylight is diffused by a glass ceiling designed by artist Eduardo Castrillo. The “Flame of Freedom” sculpture by Manny Casal represents the country’s three major islands. Upper wall murals were created by Angono artists to show the Edsa Revolution.

Other artworks that pay tribute to the indomitable spirit of the Filipino People are the 14 Stations of the Cross rendered in bronze by National Artist Napoleon Abueva; a floating glass sculpture of the Risen Christ by Ramon Orlina; and the main marble altar which was also created by Abueva. 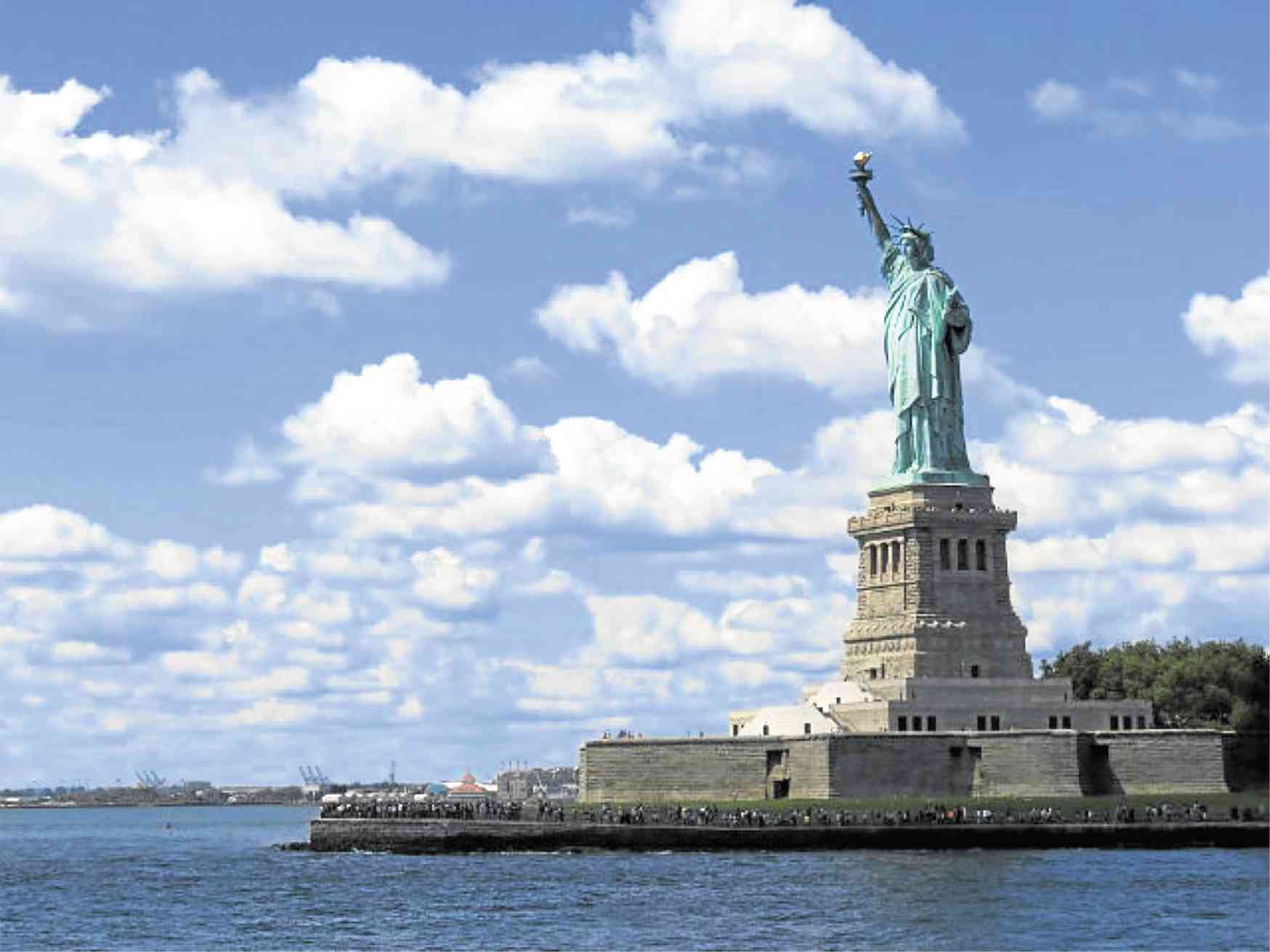 The Statue of Liberty, on Liberty Island near the entrance to New York Harbor, is recognized as a universal symbol of freedom and democracy.

The Statue is a figure of Libertas (the female personification of liberty and freedom in Roman religion), holding a torch above her head with her right hand. In her left hand, she carries a tablet of law which has the date of American Independence—July 4, 1776—written on it in Roman numerals (July IV, MDCCLXXVI).

There are seven rays on her crown, one for each of the seven continents, each measuring up to 9 feet in length and weighing as much as 150 pounds. The face on the Statue of Liberty measures more than 8 feet tall and is said to be modeled after the sculptor’s mother.

The Statue of Liberty’s torch lights the way to freedom showing people the path to liberty. Its official name represents her most important symbol “Liberty Enlightening the World.”

During the restoration, the new cooper flame torch was carefully covered with thin sheets of 24-karat gold. It reflects the sun’s rays in daytime and it is lighted by 16 floodlights at night. The original torch is currently inside the lobby of the monument.

The Statue of Liberty, a gift of friendship from the people of France to the United States, was dedicated on Oct. 28, 1886. The exterior copper covering of the Statue of Liberty is 3/32 of an inch thick (or about 2.4 millimeters thick) and the light green color (called a patina) is the result of a natural weathering of the copper.

The Statue is 305 ft from the ground to the tip of the flame. It is the equivalent height of a 22-storey building. In 1886, it was the tallest structure in New York. At the feet of the Statue lie broken shackles of oppression and tyranny. 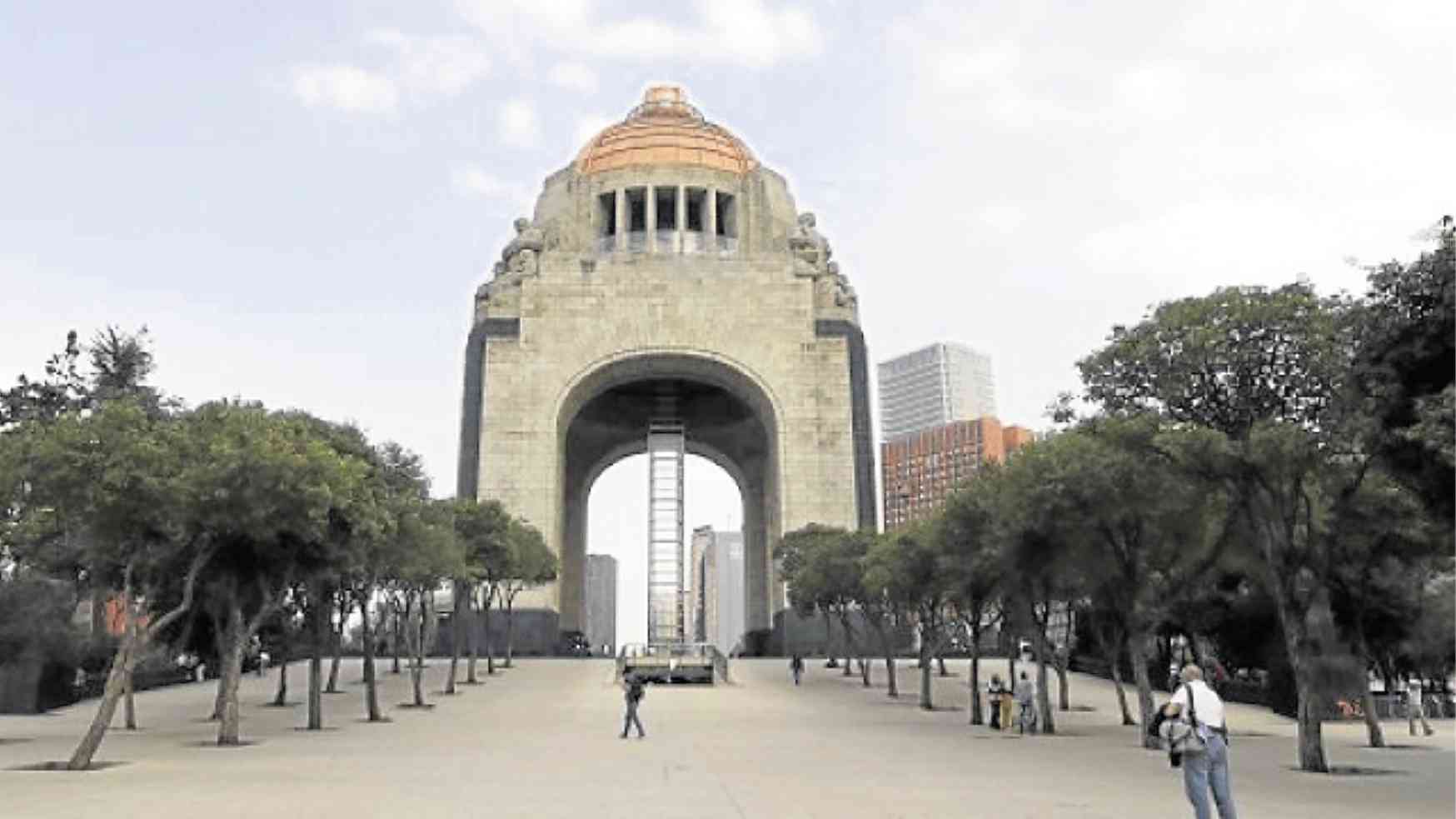 The Revolution Monument (Monumento a la Revolución) also known as the Arch of the Revolution is located on Plaza de la Republica between downtown Reforma and Insurgentes, and has long been an architectural must-see.

The monument, unveiled in 1938, at 220 feet (67 meters) is considered one of the tallest triumphal arches in the world. It was the Romans who started building triumphal arches as monumental structures to honor an important person, or to commemorate an important event with at least one arched passageway.

Each of the four massive columns of the towering art deco edifice served as crypts forming one mausoleum, also known as the “Pantheon of Outstanding Men of the Revolution,” honoring Mexico’s revolutionary and post revolutionary heroes like Francisco ‘Pancho’ Villa, Venustiano Carranza, Francisco I. Madero, Plutarco Elías Calles and Lázaro Cardenas.

The Monument was originally planned to be built as a legislative palace in time for the centennial of Mexican independence in 1910. But the construction was stalled because of the 1912 Revolution.

Construction then resumed in 1932—this time as a monument in memory of the heroes of the revolution and it took six years to complete. The design was done by Arch. Carlos Obregón Santacilia, who used Art Deco and Mexican social realism styles.

In time for Mexico’s centennial anniversary of the revolution, the Revolution Monument and the Plaza de Republica where it stands, got a major makeover in 2010. Geyser-like fountains decorate the plaza while colorful lights highlight the monument’s architectural features at night. Stone sculpture of the monument, designed by Oliverio Martinez, features male and female figures with sickles and swords of justice representing independence, the Reform Laws, Agrarian Laws and Labor Laws.

Despite being an “open” structure (it being an arch), the monument includes a museum, art gallery, snack bar, gift shop and an elevator that takes visitors to the top of the monument. At the viewing platform inside the monument’s stone and copper dome, one can have a 360-degree view of Mexico city. 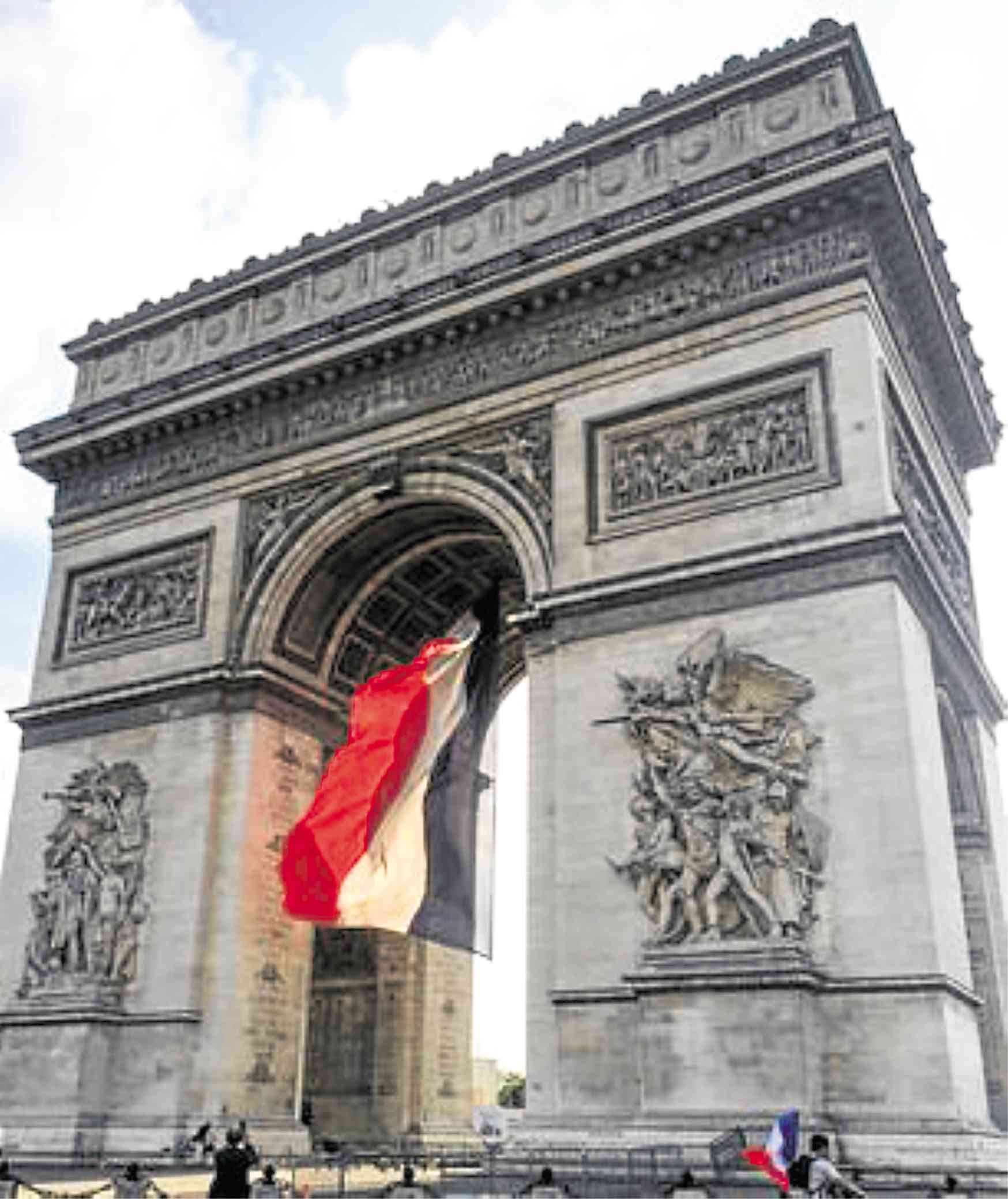 One of the world’s popular monuments is the Arc de Triomphe that stands at the center of the Place Charles de Gaulle, also known as the “Place de l’Étoile.” The arch was built to pay homage to those who fought for France, particularly those who fought during the Napoleonic wars.

The construction of the arch was ordered by French emperor Napoleon Bonaparte in 1806 because he wanted to honor the Grande Armee, the former name of the French army. It was designed by Jean Francois Therese Chalgrin, who modeled the arch after the Roman Arch of Constantine in Italy. The Arc de Triomphe is 49.5 meters tall, 45 meters wide and 22 meters deep.

Construction work stopped when Napoleon was defeated in 1814, but was continued by King Louis Philippe I in 1833. Architect Guillaume Abel Blouet finished the structure based on Chalgrin’s design. During its inauguration in 1836, King Louis Philippe dedicated it to the armies of the French Revolution and Napoleon’s empire.

The names of war victories and 558 generals are engraved on the inside and at the top of the arch. In 1923, a flame was lit for the first time in memory of the war victims. Since then, the flame is ignited every day at 6:30 p.m. 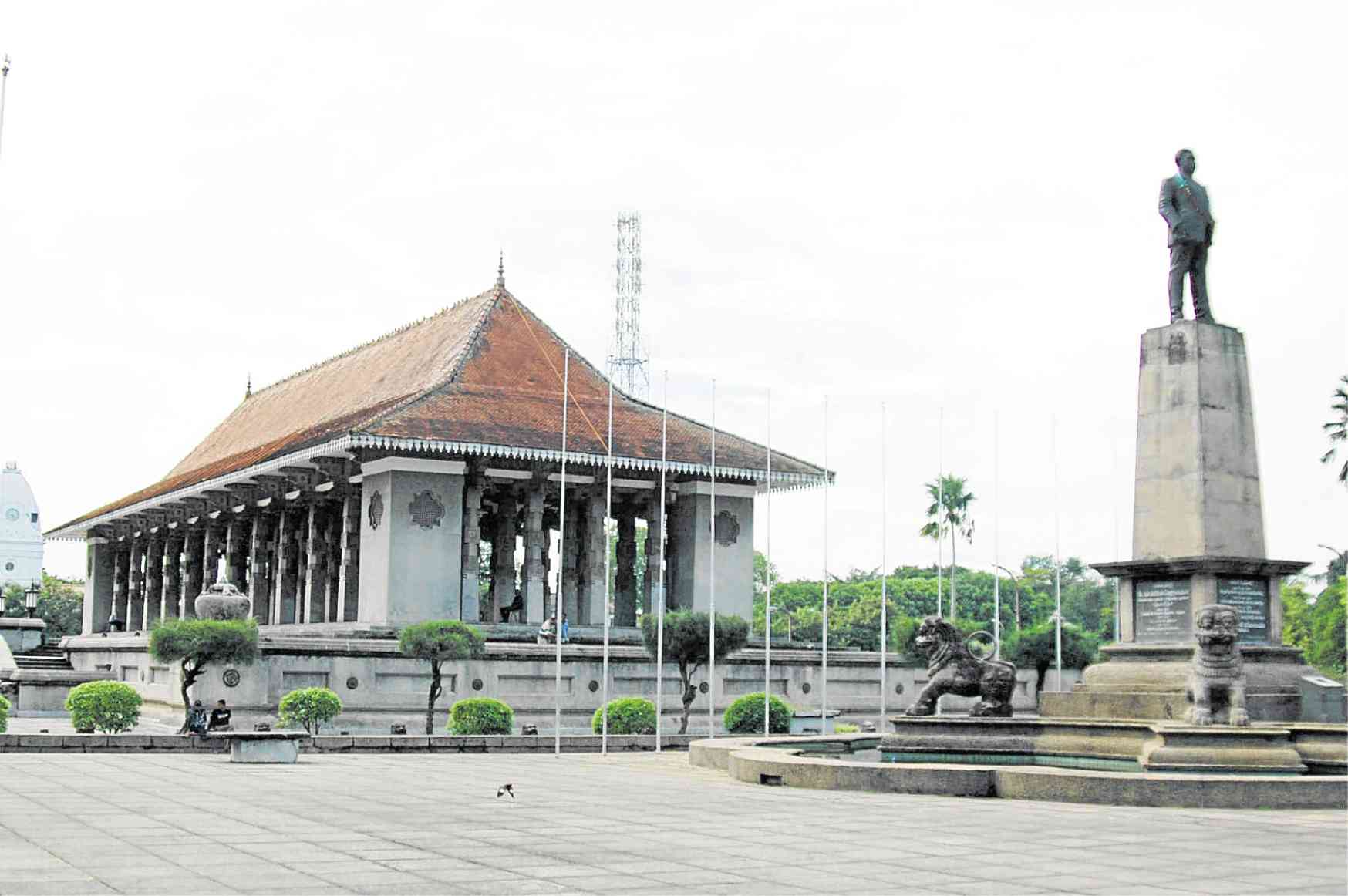 Also known as Independence Square, the memorial hall was built to mark the independence of Sri Lanka from almost five centuries of Portuguese, Dutch and British rule in 1948. A year later, the foundation stone was laid for the building. The structure’s design was inspired by Magul Maduwa (Royal Audience Hall), the royal court of Kandy, the last kingdom in Sri Lanka.

The stone building initially hosted important diplomatic guests and assemblies of the two Parliament houses. Its assembly hall can accommodate 100,000 people while the open area outside the hall can seat 25,000 people. Found at the entrance of the memorial hall is a statue of D.S. Senanayake, Sri Lanka’s first prime minister, flanked by four stone lions.

It has now become a tourist destination for its historical value and architectural heritage. It is also a recreational space for joggers and students from the nearby university. Tourists can also visit the museum in the basement that features Sri Lanka’s colonial history, independence struggle and ancient art and literature. 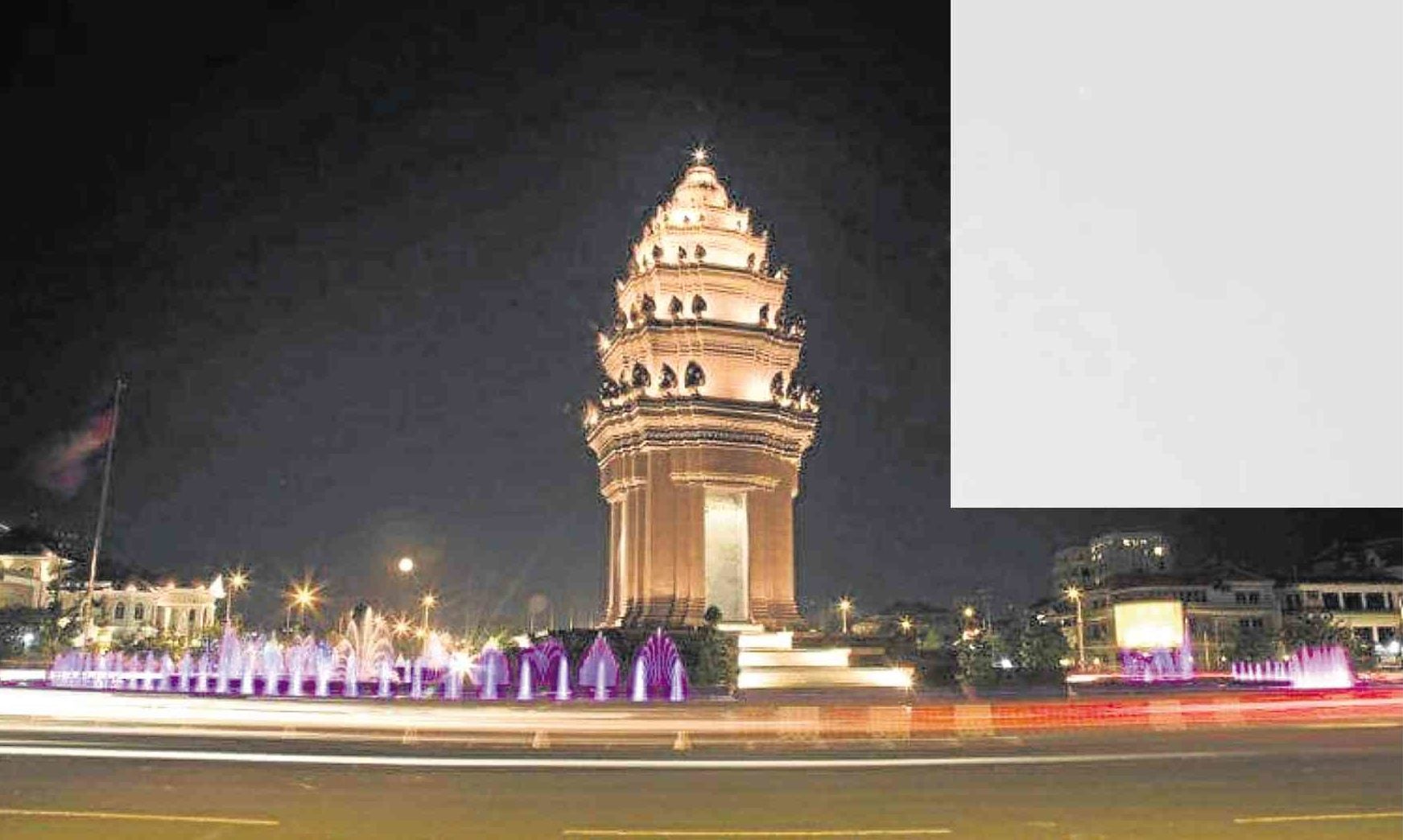 Cambodia’s Independence Monument (Vimean Ekareach), is situated in the heart of the nation’s capital on a large roundabout at the intersection of two of Phnom Penh’s busy main streets, Norodom Boulevard and Sihanouk Boulevard.

The huge structure, reminiscent in design of the towers of Angkor Wat, is patterned after a lotus bud which is said to represent purity and awakening. The lotus appears in many other Cambodian structures, such as Angkor Wat. It is also adorned with Naga heads or multi-headed cobras.

The 20-meter high reddish-brown stone Independence Monument was built in 1958 to commemorate Cambodia’s liberation from French rule. The country was dominated by the French protectorate from 1863 to 1953. It doubles as a memorial to Cambodian patriots who died for their country.

This magnificent reinterpretation of ancient Khmer architecture was built with modern construction techniques using reinforced concrete. Renowned Cambodian architect Vann Molyvann was the architect of the monument
There is a big open park with fountains at the Independence Monument and it seems to be a popular place among the locals. It is the site of celebrations and services on holidays such as Independence Day and Constitution Day.

A travel advisory says you can’t walk inside the monument but its shady perimeter provides shade from the hot sun. At night, the monument lights up in a symphony of colors of blue, red and white (the colors of Cambodia’s national flag).

‘Rolly’ expected to bring extensive damage as it threatens PH