TOKYO – Asian shares were mostly lower Thursday after another round of selling on Wall Street amid investor worries about a trade war. 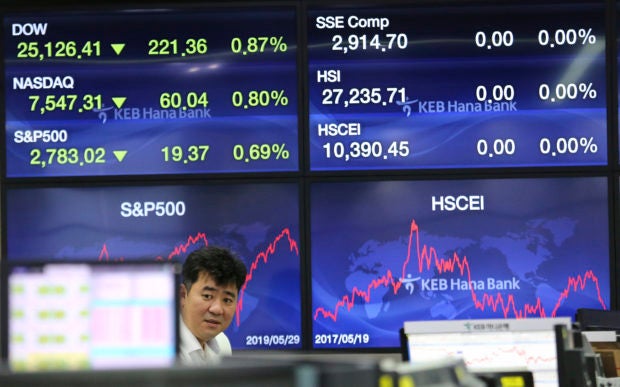 A currency trader watches screens at the foreign exchange dealing room of the KEB Hana Bank headquarters in Seoul, South Korea, Thursday, May 30, 2019. Asian shares were mostly lower Thursday after another round of selling on Wall Street and investor worries about a trade war. (AP Photo/Ahn Young-joon)

The latest market slide comes as investors worry that the trade war between the U.S. and China will derail global economic and corporate profit growth as it drags on with no sign of a resolution.

“Asia is unlikely to feel much relief today either with both the Nikkei 225 and the ASX 200 down.”

That would be its first monthly loss since December. The market has been heading steadily lower this month as prospects for the economy have dimmed and as traders got more worried about the lingering trade feud between Washington and Beijing.

In early May the U.S. and China concluded their 11th round of trade talks with no agreement. The U.S. then more than doubled duties on $200 billion in Chinese imports, and China responded by raising its own tariffs.