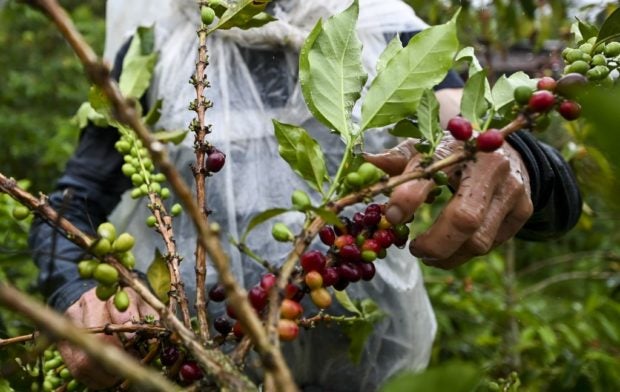 A man harvests coffee in Santuario town, Colombia, on May 10, 2019. The coffee crisis is affecting small producers, many of which tend to disappear due to the ‘paltry’ international prices, and which May harvest was mostly sold at a loss. Colombia is the third largest producer of coffee, after Brazil and Vietnam and the first of the famous soft coffee, of higher quality. AFP

SANTUARIO, Colombia – High in the lush green mountains of western Colombia where they grow the soft beans from which the world’s finest coffee is cultivated, growers are up in arms over the giveaway prices being fixed a world away on the floor of the New York Stock Exchange.

Producers here say they are selling at a loss, blaming the crash devastating their industry on stock market speculators who have forced prices down to an all-time low.

“We are paid a pittance,” says Gustavo Echeverry, 50, expressing the frustration of many of the 15,000 or so inhabitants of this coffee-growing center nestled in the mountains.

It’s a far cry, they say, from the “Fair Trade” coffee globally certified to ensure it is grown under equitable conditions, so that farmers aren’t exploited.

Some growers around the village of Santuario have been forced to rip up their crops to grow something — anything — else.

The coffee growers’ lot worsened with the last harvest, which produced beans pitted by a plague of beetles. Quality suffered, adding to an international price slump that has forced growers to sell below cost.

Ramon Jimenez has spent his life growing coffee on his San Antonio plantation nearby, but says the industry is on its last legs here.

“We never stop thinking that soon we may no longer exist as coffee growers,” says Jimenez.

The Jimenez family has been growing coffee here for three generations. Ramon’s 19-year-old grandson Javier says he grew up among the coffee trees on the plantation.

“I dream of taking over the farm, of succeeding my father and my grandfather, but if the crisis continues like this… I will have to look elsewhere, maybe even leave for the United States.”

Colombia is the third largest coffee producer in the world, after Brazil and Vietnam, and the number one producer of high-quality soft beans.

In Colombia, 540,000 families owe their livelihoods to the coffee sector. It’s the country’s top export, ahead of oil and minerals.

But in Santuario, “Coffee plantation for sale” signs posted up at the local offices of the National Federation of Coffee Growers (NFC) have sent a chill through the local industry.

Others, like Echeverry, have opened their farms up to tourism as a way to keep afloat.

Tens of thousands of people have been displaced from these mountains over the tumultuous half century of Colombia’s armed conflict. Santuario’s mayor, Everardo Ochoa, says the exodus starts again every time coffee hits a crisis.

The international reference price for coffee has dropped from a high of $1.50 per pound in 2016 to less than a dollar — a historic low.

According to the International Coffee Organization (OIC), production — measured in 60-kilogram bags — in 2018/19 will hit 167 million bags, higher than global consumption of 165 million.

The only reason coffee production still exists to any extent in Santuario is because many producers have “coffee in their veins,” and can’t do anything else, says Echeverry.

Back in 1993, Diego Henao was forced into a life-changing decision in a bid to save his two plantations, totaling 400,000 trees.

Entering the United States illegally, he stayed 13 years and earned a Green Card permanent residency before returning full-time to run his plantation.

Since then, in lean times like now, he spends four months a year in the US working as a house painter, and then injects his savings back into his coffee trees so as not to borrow from banks.

The “Coffee Cultural Landscape of Colombia” is recognized on the UNESCO world heritage list, but there are fewer and fewer coffee trees.

Gabriel Ochoa, 70, has finished struggling with his: “I ripped them up… I’ve put down sugar cane instead and I don’t regret it.”

Fernando Morales-de La Cruz founded the Coffee for Change organization to campaign for more equitable distribution of the industry’s profits.

He says a pound (half a kilogram) of green coffee equals 55 cups on the high street.

But multinational corporations pay only 90 cents, which trickles down to just 0.02 cents per cup to the producer. That’s “a quarter of what he received in 1983,” says Morales-De la Cruz.

Fearing the social impact of falling prices, the Bogota government has announced $80 million in aid and the NFC is seeking to extricate producers from the New York Stock Exchange, which has set prices for decades.

But to do that, the NFC says it needs to join forces with soft bean producers in Central America and Africa whose quality would allow them to negotiate their own prices.

Such a radical change will take time.

Meanwhile, up in the hills of Santuario, the next harvest comes in October-November. If nothing changes by then, more farms will go on sale. /cbb