BANGKOK – Shares advanced Monday in Europe after centrists lost ground to pro-business and environmentalist groups in elections for the 28-nation bloc’s parliamentary assembly.

Markets were closed in Britain.

In Asia, Japan’s Nikkei 225 index advanced 0.3% to 21,182.58 after visiting President Donald Trump said he expects a deal with Tokyo on trade after a Japanese election in July. 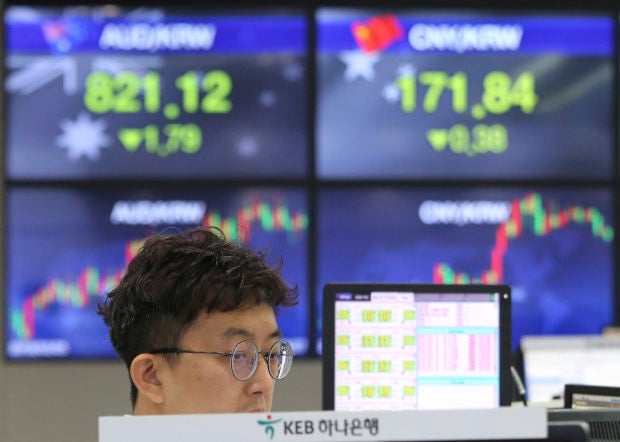 A currency trader watches monitors at the foreign exchange dealing room of the KEB Hana Bank headquarters in Seoul, South Korea, Monday, May 27, 2019. Shares were mixed early Monday in Asia in the absence of fresh news on the tariffs standoff between the U.S. and China. (AP Photo/Ahn Young-joon)

Stocks notched modest gains Friday on Wall Street, erasing some of the market’s steep losses from a day earlier, but not enough for the market to avoid a third straight weekly loss.

Fiat Chrysler on Monday proposed a merger with France’s Renault, in a deal that would create the world’s third-biggest automaker and save billions needed to invest in the race to make new electric and autonomous vehicles.

Shares of both companies jumped on reports of a merger.

In the European election, far-right and populist parties were among the biggest winners, as voters voiced concerns over immigration and security.

But environmentalist parties also made strong gains, especially in Germany, at the expense of center-right and center-left groups that have dominated the EU.

“Exit polls from EU elections suggest that the Euro-skeptic nationalists had won more seats, but are nowhere close to dislodging majority leadership from the mainstream and other pro-EU parties,” Mizuho Bank said in a commentary.

That will likely lift the euro, it said, “as markets price out the worst case outcome of nationalist parties foiling policy changes for further EU integration.”

Trump’s administration has been seeking a bilateral trade deal with Japan after withdrawing from the Pacific Rim trading block, the Trans-Pacific Partnership. The two sides are working to close gaps over trade in farm products and autos and auto parts.

“We are working on the imbalance on the trade as there has been a tremendous imbalance so that we are working on that. And I am sure that will work out over a period of the time,” Trump said. He said via Twitter that he expected an agreement in August.

Share benchmarks have swung between gains and losses as investors weigh the prospect of a prolonged trade war between the U.S. and China. Trading has been volatile since the dispute escalated earlier this month, with both sides raising tariffs on each other’s goods.

Financial companies led Friday’s buying as the yield on the 10-year Treasury note reversed part of a steep slide a day earlier.

It was at 2.32% as of late Friday. Rising yields boost interest rates on loans, which makes lending more profitable.

The 11th round of U.S.-China trade talks ended with no agreement. Instead, the U.S. moved to increase tariffs on Chinese goods, prompting China to reciprocate. The trade dispute escalated further after the U.S. proposed restrictions on technology sales to China.