PUERTO PRINCESA CITY — Twenty-three years ago, Mardy Montaño moved a thousand kilometers away from her home in Negros Occidental to be with a man she met while she was on a three-day vacation in Palawan.

Now, this 48-year-old woman is leading a group of seaweed farmers in the coastal community of Sitio Balintang, Barangay Isugod in Quezon.

Montaño is the president of the Cherish Fisherfolks Association, which has 86 members — 22 women and 66 men.

Though hesitant at first, she accepted the challenge of leading the organization.

“I never dreamed of becoming president of fisherfolk because it should be a man. But it went through an election. I don’t want this position, but then the people put me here. So I rose up to the challenge,” she said, speaking in Filipino to a small group of journalists on a media tour of Protect Wildlife Project sites of the United States Agency for International Development (USAID) in southern Palawan. 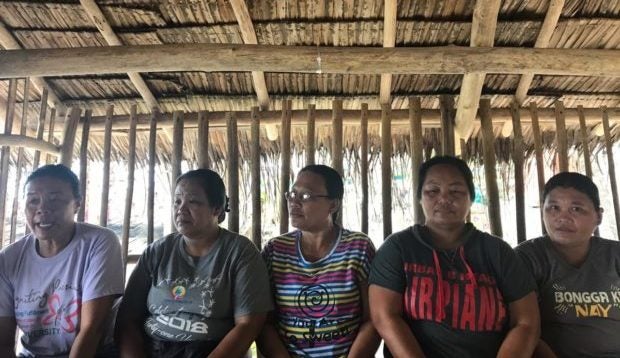 Some members of the Cherish Fisherfolks Association shared their stories to a small group of journalists on Thursday, May 23, 2019. (Photo by CHRISTIA MARIE RAMOS / INQUIRER.net)

Seaweed farming has helped association members send their own children to school.

“This is the source of livelihood that helped us give our children an education,” Montaño said. “Unlike in the cities where there are permanent jobs, there are factories, we have none of that here. Just the sea. When there’s a storm, our cooking pots are empty. Our students are pitiful whenever their fathers don’t earn anything. But because of seaweeds, we already have children who have finished school.”

Her own eldest child, she said, was already an agricultural engineer, thanks to seaweed farming.

According to her, farmers earn P85 per kilogram of seaweed.

A line of seaweed — which is about 25 meters long — weighs about 100 kilograms when fresh and from 25 to 30 kilograms once dried.

This means that they can earn up to P2,500 for each seaweed line.

“For example, if our kids would text: ‘Mama, we have a midterm or final exam next week.’ Mothers then prepare the seaweeds for drying,” Montaño said.

For association members, drying their fresh seaweed is of utmost importance as they rely mostly on dried seaweed products to bring food to the table.

In the past, these farmers from Quezon would often lay their harvested seaweed along the pier to dry.

But they were able to acquire a solar inland dryer and a floating one through a partnership of the United States Agency for International Development (USAID), the Lutheran World Relief (LWR) and the Ecumenical Church Loan Fund (ECLOF). 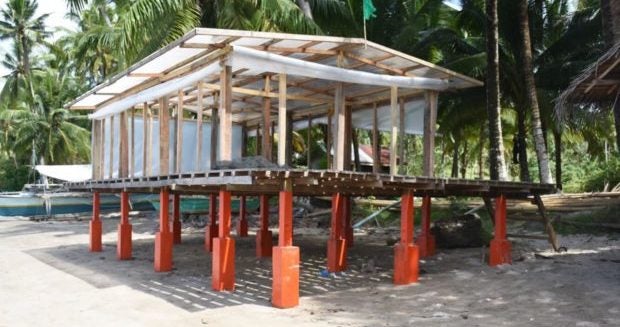 An inland seaweed dryer granted by the United States Agency for International Development, the Lutheran World Relief, and the Ecumenical Church Loan Fund to the Cherish Fisherfolks Association. (Photo from the USAID Protect Wildlife Project)

This, the members said, improved the quality of their seaweed products and reduced the time of drying from one week to two to three days.

“We already have a seaweed dryer,”  Montaño said. “It’s a big help. We used to dry our seaweeds on the pier and it would be full of seaweed. When it rained, the seaweed would have worms because they were only wrapped in tarpaulin. Our product is cleaner now because there’s no more sand. And animal urine is avoided. Then it’s easier to use. It weighs heavier and it’s of good quality.”

According to Lawrence San Diego, the communications manager of the Protect Wildlife Project of the USAID, Sitio Balintang is one of the five coastal communities that is supported by USAID and its private sector partners for group seaweed farming. 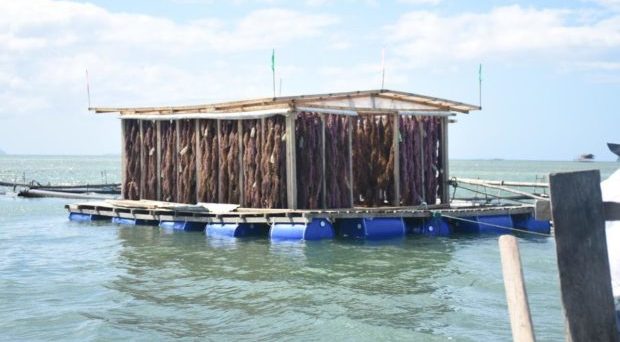 A floating seaweed dryer granted by the United States Agency for International Development, the Lutheran World Relief, and the Ecumenical Church Loan Fund to the Cherish Fisherfolks Association. (Photo from the USAID Protect Wildlife Project)

One at a time

But how can the seaweed dryers be used by more than 80 members?

Montaño said they have adopted a schedule.

It would usually take a farmer three days to dry 20 lines of fresh seaweed. To cut the waiting for the next farmer, the first one would take out his seaweed after two-and-half days and just let dry in the air at home.

However, with the association now having so many members its need for more drying facilities has become more pressing.

The members of the seaweed farming community said they hoped to one day directly sell their seaweed products in Puerto Princesa.

Currently, local buyers from Quezon would buy their product and sell it in Puerto Princesa where it can be purchased to make jelly desserts, jelly slippers, and capsule shells.

“Farmers need rice every day. So they need to sell their products right away,” Montaño said.

According to her, if they sell their products in Puerto Princesa, which is a three-hour drive from Quezon, it would take a long time for the seaweed farmers to get paid.

But because they need money right away, they just sell the seaweed in Quezon.

Another reason why they can’t sell their products themselves is they lack capital for transporting their product from Quezon to Puerto Princesa.

To maximize the cost of transportation, they would have to make sure that the delivery vehicle would be full, Montaño said. For example, she said, a three-ton delivery would be worth it.

At the moment, she said the association aims to get more capital so that they could buy seaweed from other barangays that they themselves could deliver to Puerto Princesa.