China seeks Asian neighbors’ support in trade fight with US

BEIJING – China is seeking support from Russia and from its Central Asian neighbors in its escalating tariff fight with the U.S., while also stepping up protests against moves to penalize its technology sector.

Speaking Wednesday at a meeting of the Shanghai Cooperation Organization in Kyrgyzstan, Foreign Minister Wang Yi said representatives of the eight-nation grouping had expressed “broad support” for China’s position.

In comments reported Thursday, Wang reiterated China’s stance that it would never accept unequal trading arrangements. Beijing will match “extreme pressure” from the U.S. with its own measures, he said in remarks posted on the ministry’s website. 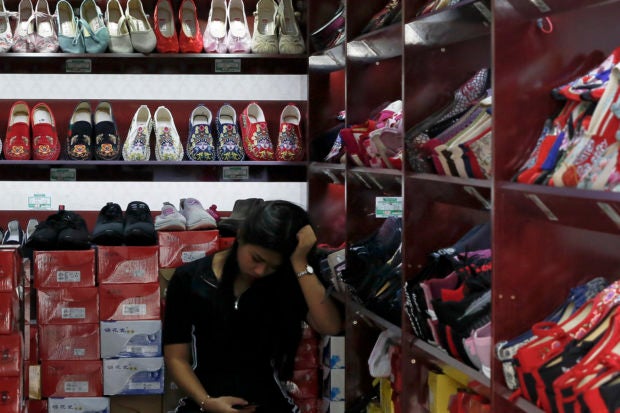 A worker browses her smartphone inside a shop selling shoes in Beijing, Thursday, May 23, 2019. An escalating trade war between the U.S. and China could mean higher prices on a broad array of products from toys to clothing. But some retailers will be less equipped to handle the pain than others, leaving consumers to carry the load. (AP Photo/Andy Wong)

The trade frictions have “aroused great concern from the international community,” Wang said. “I stress to everyone that China’s actions are not just about preserving our own legitimate rights and interests but also to maintain the norms of international relations and safeguard the international free trading system.”

Wang’s comments show how China attempting to global opinion in its favor.

Beijing has already responded to Trump’s tariff hikes on $250 billion of Chinese imports by slapping penalties on $110 billion of American goods. Based on last year’s trade, that leaves about $45 billion in imports from the U.S.

They include semiconductors and other critical inputs needed by fledgling Chinese tech industries.

China has hinted it could also leverage its role as the main global supplier of rare earths used in smartphones, lightweight magnets, batteries and other components to slap back. It could also target Apple and other companies that rely on Chinese manufacturing and sales.

So far, though, Beijing has sought to win sympathy and support by burnishing its credentials as a rules-abiding member of the World Trade Organization.

China’s Commerce Ministry lashed out Thursday at an order by the Trump administration that will cut access for Chinese technology companies such as telecom gear giant Huawei to advanced American computer chips and other components.

The move, to take effect after a 90-day grace period, constitutes the use of “American national power to suppress Chinese companies,” the ministry said in a statement on its website. This “not only seriously disrupts regular business cooperation between the sides’ enterprises, but also seriously threatens the security of the global industrial supply chain.”

The Trump administration has singled out Huawei, accusing it of posing a security threat. As a result, U.S. allies and their companies increasingly have put cooperation with the company on hold.

On Wednesday, Britain’s EE and Vodafone and Japan’s KDDI and Y! Mobile said they were pausing the launch of Huawei smartphones, including some that can be used on next generation mobile networks, amid uncertainty about the devices from the world’s No. 2 smartphone maker.

Dozens wounded as Iraqi protesters up pressure on government