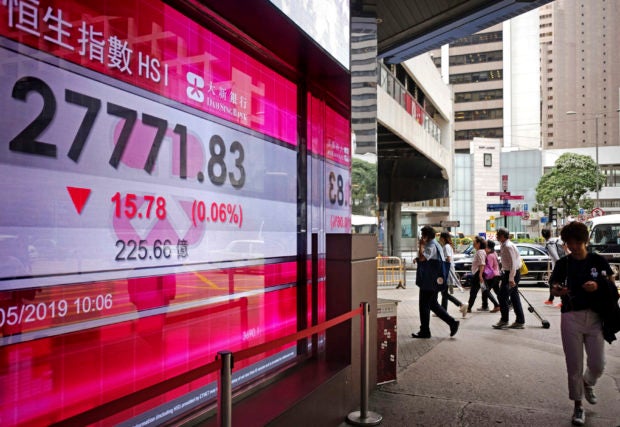 On Wall Street, futures for the Standard & Poor’s 500 index and Dow Jones Industrial Average were up 0.4%.

American officials say the biggest global maker of network gear for phone carriers is a security risk, which Huawei denies.

That followed new tariff hikes announced by both sides in a broader battle over Beijing’s technology ambitions and trade surplus.

Both sides are “seemingly digging in for a battle of attrition,” said Mizuho Bank in a report.

It said investors are trying to figure out the duration, the impact on profits and the “toxic atmosphere for American sales in China.”

On Monday, chipmakers led U.S. stocks lower as traders weighed the implications of the sales controls on Huawei, a major customer.

The U.S. government says suppliers including Huawei and its smaller Chinese rival, ZTE Corp., pose an espionage threat because they are beholden to China’s ruling Communist Party. Huawei denies it facilitates Chinese spying.

Apple Inc. skidded after an analyst warned the iPhone maker’s growth prospects could dim as Washington and Beijing spar over trade.

ENERGY: Benchmark U.S. crude gained 2 cents to $63.23 in electronic trading on the New York Mercantile Exchange. The contract gained 29 cents on Monday to close at $63.21. Brent crude, used to price international oils, shed 20 cents to $71.77 per barrel in London. It lost 24 cents the previous session to $71.97.