World shares mixed with no easing of China-US trade dispute

BANGKOK – Shares declined in Europe on Monday after a mixed day in Asia in the absence of positive updates on the trade standoff between the U.S. and China. 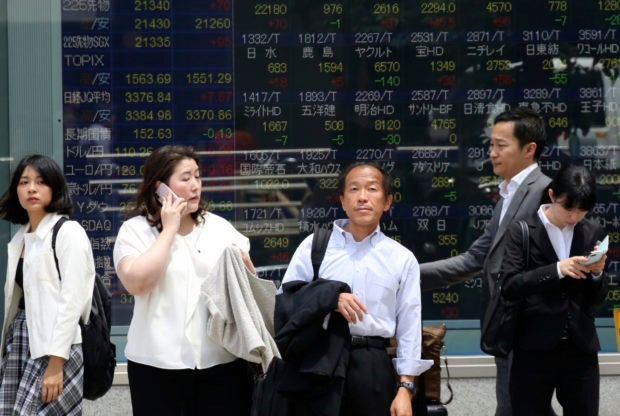 People stand by an electronic stock board of a securities firm in Tokyo, Monday, May 20, 2019. Shares are mixed in Asia, with India and Australia leading gains following elections that look set to keep incumbents in office. (AP Photo/Koji Sasahara)

His conservative, pro-business government looked set to form a majority government, leaving bewildered voters wondering how they were taken by surprise since the opposition Labor Party had been expected to win.

The election was seen as a referendum on Modi and his Bharatiya Janata Party, whose main opposition is the Congress party, led by Rahul Gandhi, the scion of the Nehru-Gandhi dynasty that has produced three prime ministers.

Japan’s Nikkei 225 index edged up 0.2% to 21,301.73 after the government reported Monday that the world’s third-largest economy grew at a better-than-expected 2.1% annual pace in January-March.

Economists had been forecasting a contraction, but strong residential demand and government spending helped keep the economy expanding for a second straight quarter.

Still, with a sales tax hike planned for later in the year, the outlook remains cloudy.

“We continue to expect the Japanese economy to expand only modestly in 2019, with growth constrained by weak exports and a deceleration in capital spending,” Stefan Angrick of Oxford Economics said in a research note. ”

The recent escalation in trade tensions will further weigh on momentum in 2019-2020.”

Markets in Shanghai and Hong Kong fell back given the lack of any news of progress on resolving the tariffs war between Washington and Beijing.

Google assured users of Huawei smartphones on Monday the American company’s basic services will work on them following U.S. government curbs, which took effect on Thursday, on doing business with the Chinese tech giant.

The announcement highlighted the potential impact on global consumers and technology industries of the Trump administration’s decision to tighten controls on Huawei Technologies Ltd., which Washington says is a security threat.

Elsewhere in Asia, South Korea’s Kospi was flat at 2,055.71. Shares rose in Taiwan and Indonesia, while markets were closed for public holidays in Thailand, Malaysia and Singapore .

ENERGY: Benchmark U.S. crude picked up 12 cents to $62.88 per barrel in electronic trading on the New York Mercantile Exchange. It lost 11 cents to $62.76 per barrel on Friday. Brent crude, the international standard, climbed 29 cents to $72.50 per barrel.

Dozens wounded as Iraqi protesters up pressure on government

Wildlife rescuers asked to turn over animals to DENR