SINGAPORE – Asian stocks were mixed on Friday amid worries that U.S. economic sanctions on Huawei may cast a pall on trade negotiations with China. 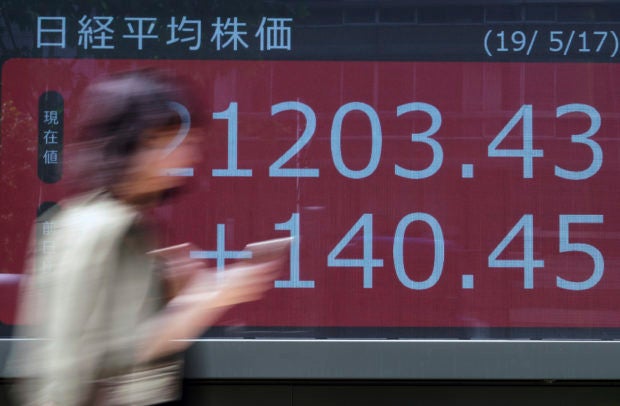 A woman walks past an electronic stock board showing Japan’s Nikkei 225 index at a securities firm in Tokyo Friday, May 17, 2019. Asian stocks were mixed on Friday amid worries that U.S. economic sanctions on Huawei would put a drag on trade negotiations with China. (AP Photo/Eugene Hoshiko)

Shares fell in Taiwan and Singapore but rose in Thailand and the Philippines.

An executive order by the Trump administration, aimed at banning Huawei equipment from U.S. networks, took effect on Thursday.

It remains to be seen how the move will affect trade negotiations.

Some investors took cues from Wall Street, which closed higher for the third straight day, led by strong performances from technology companies and banks.

“The street appears to have temporarily given up trying to predict the fluid situation that is U.S.-China trade relations and concentrate on the here and now,” Jeffrey Halley of OANDA said in a commentary.

“The march higher will be tentative at best though with sentiment both incredibly cautious and fragile,” he added.

ENERGY: Benchmark U.S. crude lost 2 cents to $62.85 a barrel in electronic trading on the New York Mercantile Exchange. It picked up 85 cents to $62.87 per barrel on Thursday. Brent crude, the international standard, lost 15 cents to $72.47 per barrel.