TOKYO – Asian shares were mixed Thursday amid worries over trade tensions, leavened by media reports that President Donald Trump may delay a decision on auto tariffs.

On Wall Street, a promising update on the Trump administration’s efforts to reach a trade deal with Canada and Mexico by Treasury Secretary Steven Mnuchin put investors in a buying mood. 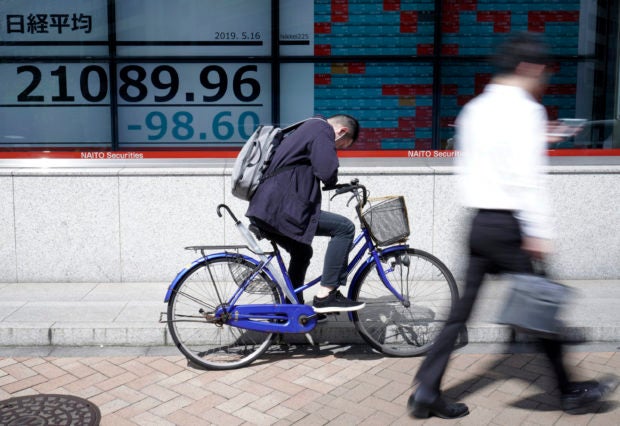 A man riding a bicycle stops in front of an electronic stock board showing Japan’s Nikkei 225 index at a securities firm in Tokyo Thursday, May 16, 2019. Asian shares were mixed Thursday as worries remained about trade tensions, tempered by media reports that President Donald Trump may delay a decision on auto tariffs. (AP Photo/Eugene Hoshiko)

Sentiment also got a boost from reports that the White House plans to delay new tariffs on car and auto parts imports from Europe by up to six months.

Mnuchin also said he expected to travel soon to Beijing to resume talks on the trade dispute that has rattled financial markets and cast doubt over the global economic outlook.

Stocks have been whipsawed this week by worries over the worsening relationship between China and the U.S. and its impact on the broader global economy.

Tensions between the world’s two biggest economies intensified over the last week.

The Trump administration more than doubled tariffs on $200 billion in Chinese imports and spelled out plans to target the $300 billion worth that aren’t already facing 25% taxes.

The escalation covers everything from sneakers to toasters to billiard balls. The Chinese have retaliated by hiking tariffs on $60 billion in U.S. imports.

“The only real piece of good news is that the U.S. has announced it will defer its decision on auto tariffs to November, perhaps aimed at placating allies such as Germany and Japan as it fights a trade war with China,” said Chang Wei Liang, of the Asia & Oceania Treasury Department at Mizuho Bank in Singapore.

The U.S. and Japan also are holding trade talks, and trade issues are expected to be on the agenda at the summit of the Group of 20 industrial nations later this month in Japan.

ENERGY: Benchmark U.S. crude gained 35 cents to $62.37 a barrel in electronic trading on the New York Mercantile Exchange. It rose 0.4% to $62.02 per barrel Wednesday. Brent crude, the international standard, added 35 cents to $72.12 per barrel.