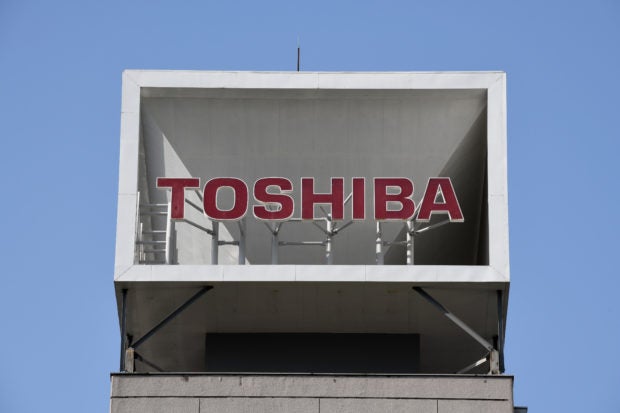 In this file photo taken on May 15, 2018 the logo of Japan’s Toshiba is displayed at the company’s headquarters in Tokyo. AFP FILE PHOTO

TOKYO — Struggling Japanese engineering firm Toshiba on Monday reported improved full-year net profit thanks to the sale of its chip business, but said operating profit was sharply down.

In the year that ended March, Toshiba’s net profit jumped 26.0 percent to 1.01 trillion yen ($9 billion), chiefly because of “profit from completion of the sale of the Memory business,” it said in a statement.

Toshiba “achieved a healthier financial condition by closing the sale of the Memory business, advancing structural reforms that included finalizing the sale of the PC business and decided to withdraw from a nuclear power construction project in the UK,” the company said.

The X300 Performance Internal Hard Drive is gaming GOALS! 🕹Learn more and level up your gaming at: https://t.co/DLjrN3UEhZ pic.twitter.com/QnkBS0fdtS

But the firm said its operating profit dropped 58.9 percent to 35.4 billion yen, partly due to restructuring costs, on sales of 3.69 trillion yen, down 6.4 percent.

For the current year to March 2020, it forecast a jump of 295 percent in operating profit to 140 billion yen, after the completion of restructuring and other projects, on sales of 3.4 trillion yen.

It did not provide net profit forecast, saying it did not have sufficient information on the chip business — which remains an affiliate.

With up to 4TB of storage in a compact and stylish portable hard drive, the Canvio® Advance Portable Hard Drive allows for you to store a combination of large files on a small, portable drive great for traveling on-the-go.
To shop online visit: https://t.co/xFaTf3WJPh pic.twitter.com/hcf3MJFL6l

The Tokyo-based company used to sell everything from rice cookers to nuclear plants and has long been a household name.

But a series of scandals and business losses in recent years have forced the company to withdraw from many operations, such as appliances and personal computers that gave it brand recognition.

To stay afloat, the cash-strapped group sold its lucrative chip business for $21 billion to K.K. Pangea, a special-purpose company controlled by a consortium led by US investor Bain Capital.